A former scholar at the Quincy Institute for Responsible Statecraft on Monday cheered on a Houthi missile attack launched against the United Arab Emirates' capital city of Abu Dhabi.

"To be honest," Sarah Leah Whitson tweeted, "it's a miracle the United Arab Emirates has been immune to retaliatory Houthi attacks for the past seven years, sitting atop those easy-target glass highrises while raining death and destruction on Yemeni men, women, and children." She emphasized a quote in the Wall Street Journal's article about the attack from Houthi deputy foreign minister Hussein al-Ezzi, who said the missile strike was "intended to punish the U.A.E. for renewing attacks on Yemen despite a pledge more than two years ago to withdraw from the war." No one was killed or injured in the attack. 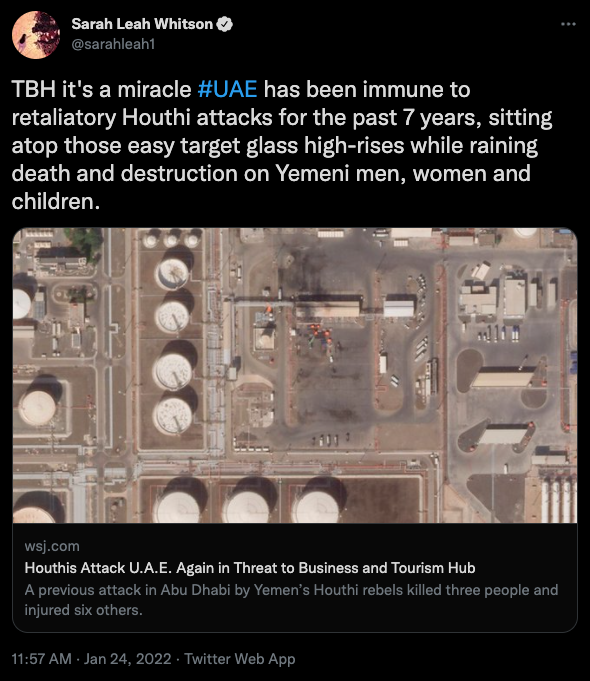 Whitson, who was managing director for research and policy at the Quincy Institute, has been criticized before for her cavalier remarks on social media about violence in the Middle East. In March 2020, as nations grappled with the first wave of the coronavirus pandemic, she celebrated draconian restrictions on citizens in Israel while lamenting they would not be enough to balance out the blood shed between the Jewish state and its Palestinian neighbors.

In response to an Israeli-American journalist who compared Israel's COVID lockdowns to "Palestinians living under occupation," Whitson tweeted, "Such a tiny taste. Missing a tablespoon of blood." She deleted the tweet and apologized the next day, adding that it "didn't come out right" and she "abhor[s] all violence."

The Iran-backed Houthis killed three people and injured six during a similar ballistic missile strike on Abu Dhabi last week. The militant group has fought against Saudi- and Emirati-backed coalition forces in Yemen as part of the nation's ongoing civil war.