Wired Magazine on Tuesday seemed to justify the vitriolic attacks that have been leveled at Ajit Pai, the chairman of the Federal Communications Commission, over the Net Neutrality debate.

The controversy arose when the magazine's Twitter account attempted to promote a recently published profile of the chairman. The magazine tweeted a quote, from an unknown source who supports neutrality, asserting Pai's actions since taking the helm of the FCC have warranted rebuke and disdain.

"‘You're not allowed to try to destroy the internet and then expect to be treated well by the internet. The internet should hate Ajit Pail,'" the magazine tweeted. 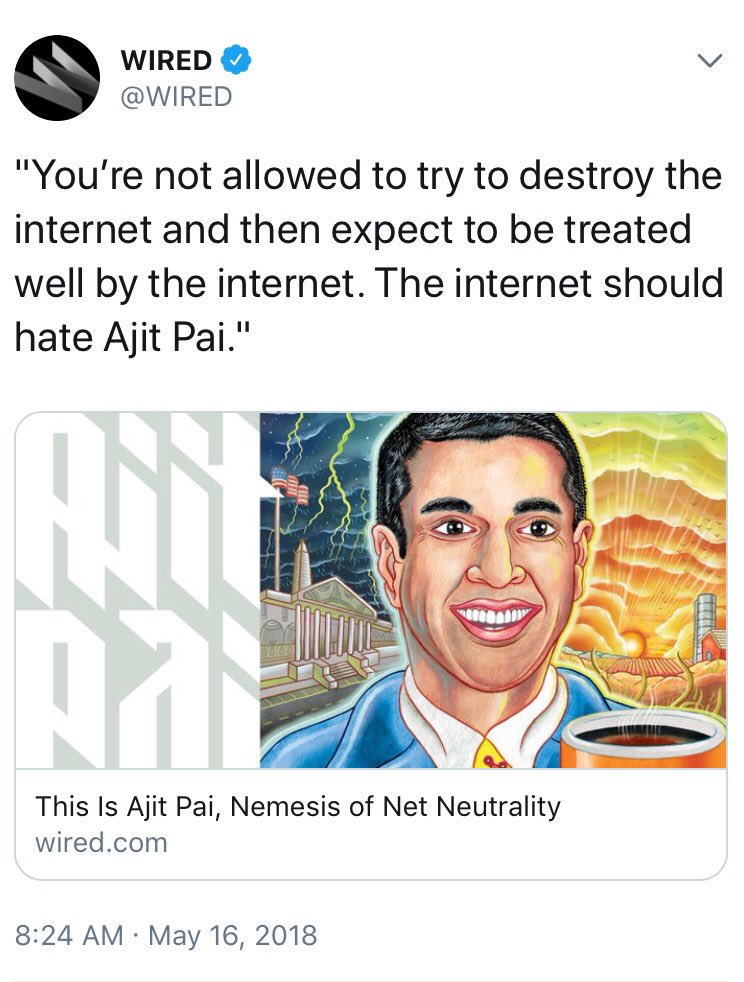 Pai has spearheaded the push to repeal the Obama-era rules that expanded federal regulation over the internet. As a result of those efforts, Pai and his family have been subject to harassment and death threats from angry progressives who argue net neutrality will irreparably damage the internet.

In November, Pai confirmed signs appeared in his neighborhood and outside his home targeting his young children by name. A reporter also tweeted that as part of the protests, neutrality activists had pizzas delivered to Pai's home every half hour.

In January, the chairman was forced to cancel a prescheduled appearance at the Consumer Electronics Show in Las Vegas after receiving death threats.

Several of Pai's colleagues at the FCC took to Twitter to castigate the magazine for what was widely seen as it condoning abuse.

This is the lowest of the low: A pathetic (and incredibly misleading) attempt to justify death threats and racist attacks against a public official. WIRED should be ashamed of itself. https://t.co/weOo2wZHZN

"News outlet" justifies death threats against a government official because of policy disagreements on #NetNeutrality https://t.co/9xgy2XAMyr

Wired subsequently deleted and replaced the tweet, stating it was "being misinterpreted."

We have removed this tweet because a quote from the story was being misinterpreted. A new one has been posted in its place.