Union HQ renovation given to builder not employing union workers

One of the nation’s leading construction workers unions awarded a major renovation contract to a builder in the midst of a labor dispute.

The James G. Davis Construction Corporation has just begun work on the national headquarters of the Laborers union (LIUNA). The office is located two blocks from the White House at 905 16th St. NW.

As Davis employees prepared the worksite on Thursday morning, a handful of United Brotherhood of Carpenters And Joiners of America members picketed Davis operations across the street on the corner of 16th and I.

Danny Nelson has been a carpenter for 27 years and union member for 10. He’s been on strike for several months and braved the August sun to highlight what he sees as unjust wages at Davis.

"I’m on strike because I want them to hire union workers," he said. "It’s a quality of life issue. Everything these days has been going up but our pay."

Davis Construction, which says it employs union labor on its website, did not return requests for comment. 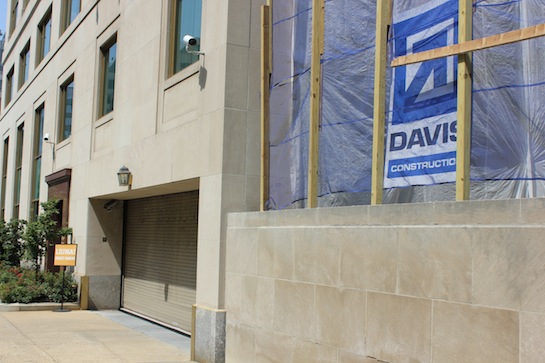 Nelson said that he has been forced to turn to side jobs, including a homemade sports memorabilia business he runs out of his Capitol Heights home, in order to pay the bills. He says he’s lost cars and homes as construction companies embraced non-union labor and work dried up

"I got to turn all my time into money. I can’t be sitting around doing nothing," he said. "There’s no union pay scale work available."

The Laborers union, which represents tens of thousands of construction workers, says that using non-union labor hurts the working poor. One of its major selling points to prospective members is higher pay.

"Men and women working in the construction industry see the difference a union makes in every paycheck. The average wage for a union-represented construction worker is $20.60, compared with $13.30 for a construction worker without a union," its website says. "Joining together in a union helps neutralize pay discrimination."

The Washington Free Beacon reached out to LIUNA to see if they were aware of the labor dispute or had put into place prevailing wage provisions to ensure that Davis’ non-union workers are paid higher wages. Union officials did not respond.

Nelson was surprised that a union keenly aware of the struggles of craftsmen and builders would opt for a company that depresses wages through cheap labor.

"I think they’re ripping people off and aren’t going to get satisfactory work," Nelson said. "I know labor unions strike on their own, but we’re both working against the same system."

Hiring a company under fire from a major union ally seems at odds with LIUNA’s message of solidarity.

"LIUNA—the Laborers’ International Union of North America—is the most progressive, aggressive and fastest-growing union of construction workers, and one of the most diverse and effective unions representing public service employees," it says on its site. "A half-million strong, we are united through collective bargaining agreements which help us earn family-supporting pay, good benefits, and the opportunity for advancement and better lives."

LIUNA is not the first union to award Davis lucrative construction contracts. The company has handled major renovations for SEIU, the American Federation of Teachers, the United Food and Commercial Workers, and even the Carpenters union that is now picketing work sites.

Nelson is not sure when he will go back to work.

"We’re going through the Great Oppression right now," he said, looking down at the customized RGIII Redskins bracelet on his arm. "For now, just tell people to email me at DannySportsDesigns@gmail.com."