Seventy percent of doctors and pharmacists believe they have dispensed opioids to a person with an opioid use disorder, according to a new survey of medical professionals.

Delphi Behavioral Health Group conducted the survey of 185 doctors, nurses, pharmacists, and other medical professionals, asking them about their prescribing habits and perception of America's on-going opioid crisis. Among the findings is the fact that 75 to 85 percent of those surveyed believed that the risk of side effects from prescription opioids are high. 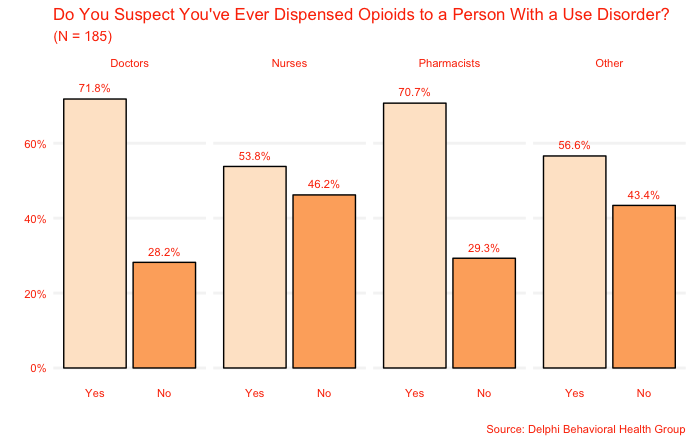 A further 56 percent said that they knew or suspected at least one current or former patient had developed an opioid dependency. Fifty-seven percent of pharmacists, and 36 percent of doctors, felt as though they were "enabling" the addiction of opioid-dependent people they prescribed or dispensed opioids to.

There were just under 200 million prescriptions for opioids issued last year, about six prescriptions for every ten Americans. In the same year, the Centers for Disease Control and Prevention estimated just south of 60,000 deaths involved opioids of all kinds, including about 15,000 involving prescription opioids.

As such, the new survey raises a deeper question: What role do the doctors who write opioid prescriptions, and the pharmacists who fill them, play in America's ongoing opioid overdose crisis?

The answer is more complicated than it may seem. Many subsequently dependent Americans get their first taste of opioids from a prescription bottle—either one written directly for them or, more frequently, gifted, purchased, or stolen from a friend or relative. But users generally do not overdose on pills that they have been prescribed.

It is appropriate, then, to describe doctors and pharmacists as a potential vector for dependency, but not for overdose death—irresponsible prescribing practices can help start people down that road, but harder drugs like heroin and fentanyl (which is often also involved in prescription opioid deaths) do most of the dirty work.

As such, opioid prescribing is like any practice in medicine, in that it involves weighing the risks and rewards in terms of long-run patient quality of life. There is good evidence to suggest that the action of third parties can both help and hinder this decision-making.

For example, recent research has directly linked pharmaceutical firms' compensation of doctors to increased prescription rates and, indirectly, overdose levels. On the other side, prescription drug monitoring programs—which allow physicians to track whether patients are being overprescribed opioids—have been shown to reduce misuse when they are mandatory.

The DBHG survey shows another factor that can affect prescribing behaviors: the media's (often-under-nuanced) attention to the opioid crisis. Fifty-two percent of medical professionals surveyed said they felt "villainized" by the media, 40 percent said that media coverage has induced them to prescribe opioids less frequently than before, and 33 percent said they try to offer their patients alternatives.

This last point is perhaps the most critical in addressing the trade-offs associated with opioid prescribing. Physicians would be immeasurably better off if they could prescribe a non-habit-forming painkiller as effective as opioids. More than half of pharmacists and doctors believed that there are good opioid alternatives available on the market for pain management (although the question did not specify chronic versus acute pain). But—beyond the effective treatment of acute pain with OTC meds—few serious substitutes currently exist.