U.S. military and civilian personnel in Afghanistan have been issued a health alert after an investigation found that the daily disposal of solid waste in an "open air burn pit" at the Camp Leatherneck Marine Corps base is filling the compound with toxic fumes.

Personnel at the military base have been caught burning their waste in these open pits despite the installation of $11.5 million dollar incinerators that can perform the task in a safe and healthy manner, according to the Special Inspector General for Afghanistan Reconstruction (SIGAR), the U.S. government’s top oversight official in the war-torn country.

SIGAR concluded in a Thursday alert sent to the Pentagon and other military officials that instead of using the four incinerators at the compound, the 13,500 military and civilian personnel are "relying heavily on open-air burn pit operations to dispose of its solid waste," according to the alert letter, which was sent to top military brass and officials at U.S. Central Command (CENTCOM).

The use of such pits constitutes a violation of regulations issued by the Pentagon and CENTCOM. Camp Leatherneck has been violating this law for about five years, SIGAR found.

Oversight officials independently discovered in April that $5 million incinerators at another U.S. base have been left to decay, collect "bird excrement" and forming "stagnant water" puddles that have attracted "malaria-infected mosquitoes."

"An issue potentially endangering the health of U.S. military and civilian personnel supporting the mission in Afghanistan has come to my attention that I believe requires your immediate action," John Sopko, SIGAR’s top inspector, wrote in the Thursday letter.

"Specifically, Camp Leatherneck in Helmand province is underutilizing its four solid waste incinerators and, as a result, is continuing to use open-air burn pit operations to dispose of its daily waste," Sopko wrote.

The camp produces about 54 tons of solid waste each day, according to SIGAR. 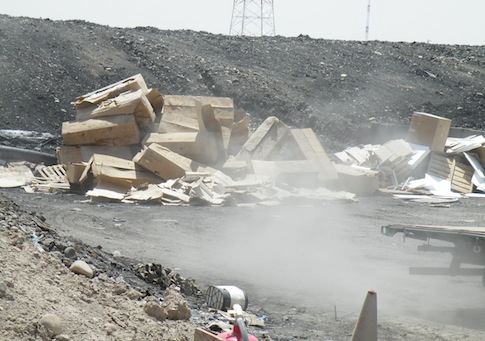 "You should consider terminating the use of Camp Leatherneck’s open-air burn pit operations as quickly as possible," he instructed.

Pentagon spokesperson Bill Speaks told the Washington Free Beacon that it is working with SIGAR to address these issues. CENTCOM officials declined comment.

Waste would not have to be disposed in this illegal manner if officials begun fully using their $11.5 million incinerators, SIGAR determined.

"Camp Leatherneck could terminate its use of open-air burn pit operations through maximum use of its incinerators, which it paid $11.5 million to purchase and install," the report states. "To date, this has not happened and, as a result, possible long-term health risks to the camp’s personnel continue."

SIGAR concluded in an April report that "inadequate planning resulted in $5 million spent for unused incinerators and the continued use of potentially hazardous open-air burn pit operations" at Forward Operating Base (FOB) Salerno.

"The U.S. Army Corps of Engineers (USACE) awarded a $5.4 million contract … on July 20, 2010, to Yuksel-Metag-Tepe-Yenigun-Zafer Joint Venture, a Turkish company, to construct solid waste management facilities at Forward Operating Base (FOB) Salerno," according to the report.

However, military personnel continued to rely on the burn pits, according to the report.

SIGAR has continued to document major instances of fraud, waste, and abuse in Afghanistan that is potentially costing U.S. taxpayers millions of dollars.

SIGAR reported earlier this week that a $34 million facility "that was meant to serve as command headquarters" will now be scrapped and likely bulldozed.

The oversight officials also warned in June that the United States is spending $771 million on warplanes that illiterate Afghan security personnel cannot operate.