"Choose life, your mommy did."

It's an old bumper sticker, but I catch sight of it as I'm rushing into the May 22 11th annual Campaign for Life Gala hosted by the Susan B. Anthony List and featuring President Donald Trump as its keynote speaker. I'm late, inappropriately seersuckered, and cloaked in the smell of old tobacco. It has also been raining all day.

When SBA List President Marjorie Dannenfelser introduces the president, I'm taking stock of my bearings: the interior of the National Building Museum. It's like this place was designed for Trump events. The main ballroom is supported by massive gold-flecked Corinthian columns. Smaller arches—also painted gold—supported by Ionian columns flank the ballroom. The blue lights flashing all over the room give the event an S.S. Coachella vibe.

But this is not some limp-chicken-dumped-on-asparagus fundraiser. SBA means business. Several two-story banners depicting adorable newborn children with the header WORTH FIGHTING FOR hang at the front of the ballroom where a stage faces a crowd of about 800 guests. This is the first time the organization has secured the National Building Museum and it's the largest fundraiser dinner SBA has ever hosted.

And SBA President Marjorie Dannenfelser is proud to put on the show. For the past year-and-a-half, she has been working with the Trump's administration to help orchestrate what she hopes will result in the eventual overturn of Roe v. Wade, the United States Supreme Court decision that legalized abortion nationally in 1973. Her tone tonight is celebratory.

"When it comes to life, President Trump is keeping promises," she tells a cheering crowd.

Since Trump was elected in 2016, his administration has encouraged pro-life initiatives at the federal and state levels with the guidance of pro-life groups such as SBA. According to the Gala program, Trump's "pro-life victories" include appointing Justice Neil Gorsuch to the Supreme Court, in 2018 becoming the first president to ever address the March for Life, and supporting a series of federal regulations to defund or otherwise dismantle pro-choice advocacy.

Most recent among these victories for SBA is the Trump administration's support for a regulation that would partially defund the abortion advocacy group Planned Parenthood. The regulation bans programs that receive family planning dollars under the Title X Family Planning Program from referring their beneficiaries (mostly low income women) to abortion agencies. This restriction was first introduced under President Ronald Reagan, but Trump would be the first president since the 1980s to seriously enforce it.

And now that he's up there at the podium, Trump redoubles his support for the Title X restrictions.

"Today we have kept another promise," he says. "My administration has proposed a new rule to prohibit Title X funding from going to any clinic that performs abortions."

The crowd stands and applauds. The singer Joy Villa—who had just performed the National Anthem—cups her hands to her mouth to magnify her cheers. I dab a wine stain out of my seersucker coat. 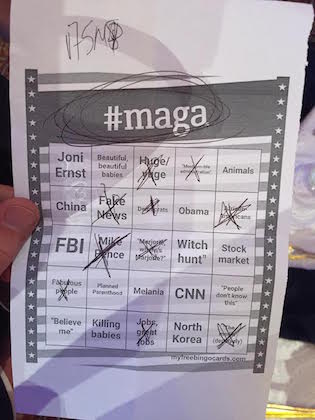 Of course, Trump doesn't stay focused on pro-life issues for long. After cataloguing his relevant achievements (most notably his reinstatement of the Mexico City Policy, which restricts the United States from funding international abortions), he launches into his list of things-we-have-heard-before. Someone in the back of the ballroom starts passing around Trump Bingo sheets with all of his predicted buzzwords.

Take a drink each time he says one.

It turns out to be a heavy drinking contest. We get a healthy dose of  "Make America Great Again" references, "huge/yuge" accomplishments, and the self-bestowed moniker "most pro-life administration." Trump also treats us to his usual round-up of mockery for "fake news," "Democrats," and "the media." Also not to be forgotten are "African Americans," "Mike Pence," "fabulous people," and "jobs, great jobs." Trump Bingo even makes provision for the inevitable "Marjorie, where's Marjorie?" line that Trump pulls out to praise Dannenfelser for her own achievements.

But these lines are just Trump being Trump. What really matters to the people in this room is the fact that he's not only taking their advice seriously but also making his own effort to convince pro-life Americans that he stands with them.

Somewhere toward the tail-end of his speech—after the Trump Bingo Boppers are all blitzed out — the president points into the crowd at a four-year-old jumping up and down in her seat.

The adopted child of Gaithersburg couple Lisa and Bruce Alexander, Katharine was born from opioid dependent parents. She was nursed to health and adopted in 2014. She's here now with her parents at a table conveniently located near the president's podium.

"Katharine's four years old and she is full of incredible energy, spirit, and talent," Trump says to the crowd. "At the age of two, she memorized 'America the Beautiful.' She recites poetry, and recently she announced to her dad that when she grows up she wants to be a famous police officer. And then when she gets tired of that, she wants to become president."

The Alexanders bring Katharine up onto the stage to meet Trump. The president chuckles.

"She'll be president someday," he says.

Trump uses the opportunity to adopt faith-based rhetoric similar to what he said at the March for Life.

"Katharine reminds us that every life is sacred, and that every child is a precious gift from God, so true," he says. "As the Lord says in Jeremiah, 'Before I formed you in the womb, I knew you. Before you were born, I set you apart.'"

Later on in the night, I run into Representative Steve Scalise (R., La.) as he's preparing to toast the ballroom. Scalise was originally slated to be tonight's keynote speaker until Trump became available. We shake hands and take a picture together.

"Love the seersucker," he says.

I silently wish I had worn something less conspicuous.

When he walks away, I notice Scalise is still walking on crutches—in the final stages of a long recovery from when he was shot in the leg by a crazed gunman on an Alexandria, Virginia, baseball diamond last summer. In the course of tonight's event, nearly every speaker has commended him for continuing to serve in Congress despite his injuries.

"He's in better shape than the rest of us," Trump had joked.

Now as Scalise makes his way to the curtain behind the podium, the guy standing next to me gives me a nudge. He points at the crutches.

"It's an amazing thing," he says. "God's doing good things with him. We're seeing miracles every day."

And maybe he's right. When everyone wakes up from this fundraiser tomorrow morning, they'll regret their stomachs: the steak 'n' potatoes sloshing around with the overindulgences of an open bar. But at least the experience won't be the usual post-fundraiser carnival of despair.

As far as pro-lifers are concerned, Trump's support is a miracle — and they're not about to question it.