Pro-Israel protesters disrupted the opening performance of the New York City Metropolitan Opera's production of "The Death of Klinghoffer," a controversial opera that critics say condones anti-Semitism and terrorism against Jews.

The Met's production, which debuted on Monday evening, has been engulfed in controversy for months, with pro-Israel leaders and members of the Jewish community accusing the prominent theater company of staging an offensive and anti-Semitic production.

"The Death of Klinghoffer," written by Alice Goodman and set to music by John Adams, documents the 1985 murder of wheelchair-bound New York resident Leon Klinghoffer by Palestinian terrorists aboard a hijacked cruise ship.

Portions of the play are told from the terrorists' point of view and the dialogue includes language that critics say glorifies terrorism and justifies the murder of Jews.

Some 4,000 protesters, including members of Congress, gathered outside of Lincoln Center prior to the performance to proclaim their anger at the Met and its general manager, Peter Gelb, for agreeing to stage the controversial opera.

The protest, which was met with a heavy police presence, also continued inside the opera house when several audience members stood up to disrupt the performance with boos and pro-Israel chants.

"The murder of Klinghoffer will never be forgiven," one man could be heard repeatedly shouting shortly after the opera began. His protest was met with loud applause and cheers from many other audience members.

Boos could be heard intermittently from the crowd at various times in the performance, including at one interval following a section of the opera entitled, "Chorus of Exiled Palestinians."

A line of protesters sitting in wheelchairs were spotted directly outside of the Lincoln Center as multiple speakers addressed the large crowd, which could be heard breaking into chants of "Shame on Met Opera." 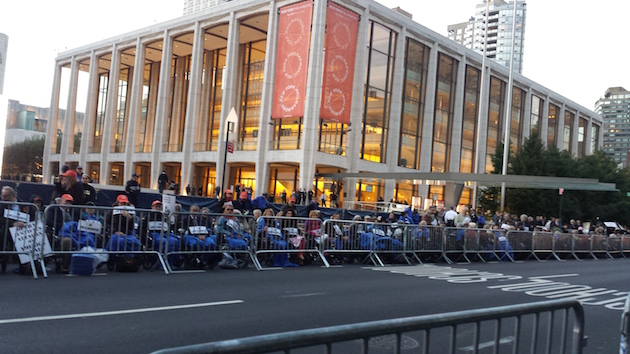 "This is a distorted work" that "supports terrorism," said former New York City Mayor Rudy Giuliani to loud cheers from the crowd.

It was a "grave mistake" on the Met's part to run the opera, said Giuliani, who came under fire from current Mayor Bill DeBlasio for agreeing to attend the pro-Israel protest.

Other speakers, including Reps. Peter King (R., N.Y.) and Eliot Engel (D., N.Y.), also dismissed the Klinghoffer production for what they said is its endorsement of terrorism.

"We stand against the whole message of this opera," King said. "This is a horrible demonstration of terrorism" that cannot be rationalized under the guise of art.

"This is an absolute shame and a disgrace," added Engel. "We are here saying no to terrorism, no to this opera." 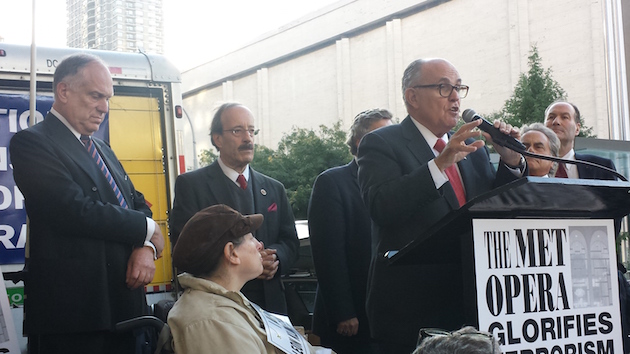 Anne Bayefsky, director of The Touro Institute on Human Rights and the Holocaust (IHRH), said the opera "was art in the service of terrorist politics."

It "communicates that terrorism can be justified," she said. "It means that anti-Semitism is a reasonable outcome of the genuinely aggrieved."

The scene was lined was police barricades and officers, who responded to pleas from theater officials who claimed earlier this month that the crowd may get violent.

Police scanned tickets as theater goers entered the premises via a line of barricades. Uniformed officers could be seen inside the opera patrolling for potential protesters.

While the Met agreed earlier this year to cancel its worldwide broadcast of the production, it refused to cancel the opera in its entirety.

However, the Met offered space in the playbill to Leon Klinghoffer's daughters, Lisa and Ilsa, both of whom have objected to the production.

"Terrorism cannot be rationalized. It cannot be understood. It can never be tolerated as a vehicle for political expression or grievance," Lisa and Ilsa write in a note to viewers. "Unfortunately, ‘The Death of Klinghoffer' does all this, and sullies the memory of a fine, principled, sweet man in the process."

The audience Monday evening witnessed some of the production's most controversial moments, including odes to terrorists and scenes of "exiled" Palestinians bemoaning the state of Israel.

"You are always complaining of your suffering but wherever poor men are gathered you can find Jews getting fat," one of the Palestinian terrorists says to the wheelchair-bound Klinghoffer before he is murdered, cast over the side of the ship along with his chair.

"They know how to cheat the simple, Exploit the virgin, Pollute where you have exploited, Defame those you cheated, And break your own law with idolatry," one terrorist sings.

"America is one big Jew," the terrorists state at another point.

As the opera came to an end late Monday, some of the most raucous applause from the audience was reserved for the four men portraying the Palestinian terrorists, all of whom took a deep bow as the crowd roared.