A bill introduced to the House of Representatives on Wednesday would create a program to help connect veterans suffering from Post-Traumatic Stress Disorder with service dogs.

The Puppies Assisting Wounded Servicemembers (PAWS) Act, introduced by Rep. Ron DeSantis (R., Fla.), would establish a pilot program within the Veterans Administration. That program would provide a trained service dog to veterans who have severe levels of PTSD, and whose symptoms persist despite treatment. Under the bill the Veterans Administration would pay third-party dog training organizations for the dogs they provide to veterans in the program.

To maintain eligibility for the program, the veteran must see a VA primary care doctor or mental health professional quarterly.

The bill would authorize $27,000 for the VA to spend on each dog from an organization accredited by Assistance Dog International. It also includes VA health insurance for the dog. In total the PAWS Act allocates $10 million to fund the pilot program.

Corporal Cole Lyle, a major proponent of the bill who served six years in the Marine Corps, said Kaya, his service dog, helps him overcome the struggles of PTSD on a daily basis. "I deployed out of Camp Lejeune in North Carolina, and served with ISAF forces in Helmand province," he told the Washington Free Beacon. "The difficulties I had transitioning back into civilian life stemmed out of roughly the last two months of the deployment, when I was volunteering at an understaffed trauma hospital in my spare time on base. When I got home, I would have recurring nightmares and anxiety attacks." 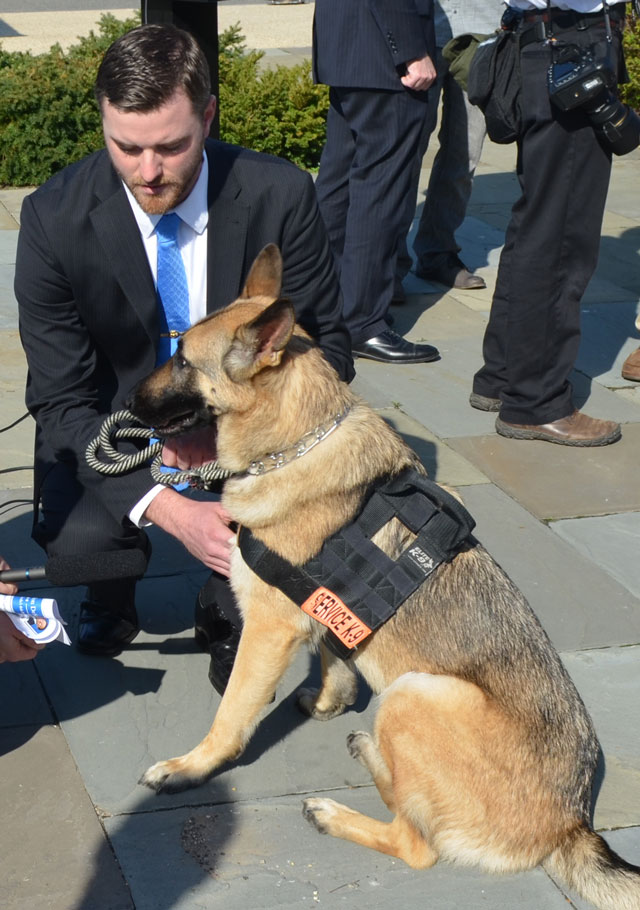 "Kaya is trained specifically to jump up in bed and wake me up from nightmares or to lick my hand or face to remind me to remain calm in the early stages of an anxiety attack, effectively neutralizing their ability to snowball."

Cpl. Lyle said many veterans don't respond well to traditional treatments such as prescription drugs or counseling but run into financial barriers when pursuing treatment with service dogs."When I personally was exploring other options, I looked into several nonprofits that provide these dogs to veterans but on a nonprofit budget and a huge demand, wait times can be over a year and a half. I had to purchase Kaya and her training on my own, which cost roughly 10k."

"It's because of this, and losing several veteran friends to suicide, that I sought to change VA policy and have been working with congressman DeSantis' office since then to craft responsible legislation to do just that."

Rep. DeSantis, a Naval Reserve officer, said the bill was about saving veterans' lives. "Thousands of our post-9/11 veterans carry the invisible burden of post-traumatic stress, and there is an overwhelming need to expand the available treatment options," he said in a statement. "The VA should use every tool at their disposal to support and treat our veterans, including the specialized care offered by service dogs. The PAWS Act is a simple bill that could have a dramatic – and potentially life-saving – effect on the lives of many."

"As we face an epidemic of veteran suicides, we must make sure that all of our returning service members are honored and taken care of, no matter the wounds they bear."