Obamacare insurers have proposed rates for 2016 that would be an average of a 12 percent increase over last year and up to 20 percent depending on health care provider, according to data released by HealthPocket.

"Given the rate of general inflation in the country, and the economic situation, the rate increases were surprising to us," Kev Coleman, head of research and data at HealthPocket, told CNBC. "I think they’re (Obamacare recipients) going to be frustrated. We tend to forget that millions of people are unsubsidized … these people are paying full freight."

The website obtained the increased rates from The Centers for Medicare & Medicaid Services and graphed the change from 2015 to 2016 on Wednesday. 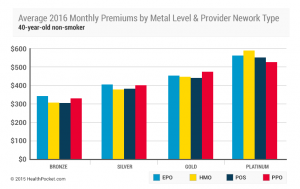 HealthPocket examined premium costs in public rate filings for 2016 Obamacare plans in 45 states. Premiums were compared for 40-year-old non-smokers in the largest city in each state. On average the proposed premiums for 2016 Obamacare plans were 12% higher than the 2015 premiums. Silver and gold plans had the greatest average rate increases of 14% and 16% respectively, while bronze rates increased 9% and platinum rates increased 6%. On average across the four metal tiers, premiums were up 20% for HMOs and 18% for EPOs. Premiums for POS plans were up 15% from 2015 to 2016, while PPO premiums were up just 8%.