Democratic Rep. Maxine Waters (Calif.) spoke to the Huffington Post on Thursday and fondly remembered the 1992 Los Angeles riots, insisting they were actually an "insurrection."

More than 50 people were killed during the riots, with thousands more injured and over $1 billion in property damage. But Waters told the Huffington Post that the L.A. riots were "a milestone in the history of black people demanding justice."

"These were people who had been basically forgotten," Waters said. "And because of Rodney King's beating and the current emotion that was stirring in that, it was like people were saying, ‘We're here. You can't do this to us. Look what you're doing, look how you've been.'"

Waters' history of calling the riots an "insurrection" dates back to the riots themselves.

"What I tried to do was take it out of the discussion of ‘these are just no good, crazy rioting people' and to talk about what I call an insurrection, which made a lot of white people mad," she recalled.

In one famous incident of "insurrection" broadcast across the county, four men dragged truck driver Reginald Denny out of his cab and beat him within an inch of his life.

Another victim of the "insurrection" was 45-year-old Howard Epstein. As the Los Angeles Times reported, "Onlookers broke into applause when someone yelled that the dead driver was white."

L.A.'s Korean-American community faced the brunt of the "insurrection" as a favorite target of the "rebels."

Over 2,200 Korean businesses were targeted for looting and violence, causing $400 million in damages. 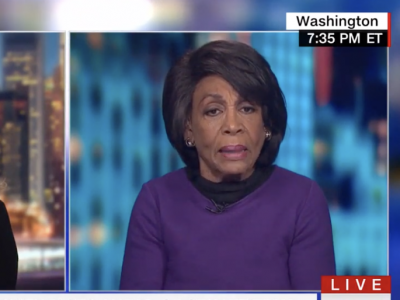