PAWS Act introduced in the Senate

The Senate's version of the PAWS Act was introduced in a bipartisan effort to extend Veterans Affairs treatments to cover service dogs on Wednesday.

Senators Deb Fischer (R., Neb.) and Cory Booker (D., N.J.) introduced the bill, known as the Puppies Assisting Wounded Service members (PAWS) Act. It would create a pilot program at the VA to provide veterans suffering from post traumatic stress disorder with trained service dogs and veterinarian care. The veteran would also be required to make quarterly mental ouseealth check ups at their local VA facility to remain eligible for the program.

The bill authorizes $10 million per year to fund the pilot program, which will run from fiscal year 2017 to 2022. It's House counterpart, introduced in March, has already accumulated 97 co-sponsors from both sides of the aisle and is currently awaiting hearings in the Veterans Affairs Committee. 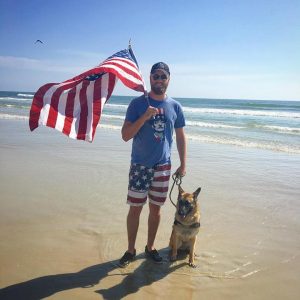 Cole Lyle, a six-year veteran of the Marine Corps who has been a major proponent of the legislation, said his service dog, Kaya, helps him deal with PTSD on a daily basis. He said he's encouraged by the introduction of the PAWS Act in the Senate and expects it to gain strong support.

"I couldn't be more thrilled," Lyle told the Washington Free Beacon. "I've met with many senators personally, including Thom Tillis, Bill Nelson, John Boozman, Thad Cochran, Jerry Moran, Joni Ernst, and Jack Reed, all of whom have expressed their willingness to get behind PAWS."

"I'm set to meet with several more senators in the coming weeks before the August recess, and PAWS has the support of many prominent national veterans organizations like the American Legion, the VFW, and IAVA, just to name a few."

The senators who introduced the bill said it was an effort to help provide America's wounded veterans with more treatment options.

"Our wounded warriors have made tremendous sacrifices for their country," Sen. Fisher said in a statement. "Many bear invisible wounds and struggle each day to make it to the next. I’m proud to join Senator Booker to introduce the PAWS Act. Our bill would bring the joys and love of man’s best friend to help our veterans cope with the scars of war."

"We are forever in debt to our brave wounded warriors for their sacrifice to preserve our freedoms," Sen. Booker said in a statement. "I am proud to join Senator Fischer to introduce bipartisan legislation that will enable the VA to provide service dogs to increase the quality of life and provide therapeutic comfort for our heroes as they readapt to civilian life."

Lyle vowed that he and Kaya would continue to lobby for the PAWS Act and expects to have it on the president's desk soon.

"Kaya and I will continue to be an active part of the process as it moves forward in the Senate, and I have every confidence we can get this through both chambers and on the president's desk before the end of the year," he said.