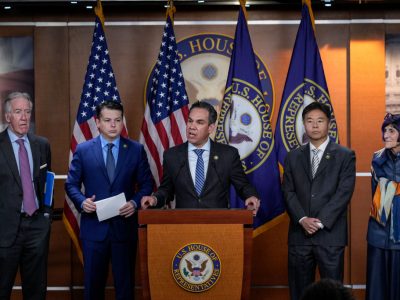 Rep. Keith Ellison (D., Minn.) on Tuesday repeatedly pressed new Federal Reserve chairman Jerome Powell to give his opinion on the potential economic fallout of so-called "Dreamers" getting deported, leading Powell to respond that the Fed does not handle immigration policy.

Ellison read Powell studies from the libertarian Cato Institute and the left-leaning Center for American Progress estimating that ending DACA would cost the U.S. economy $280 billion and $460 billion over the next 10 years, respectively.

"What kind of economic impact would ending DACA and making 700,000 Dreamers deportable have on our economy?" Ellison asked.

"Well, let me say that these are difficult and important issues, and we of course don't do immigration policy at the Fed," Powell said.

"But I'm not asking you about immigration policy," Ellison said. "I'm asking about economic impact of taking 700,000 people, 90 percent of whom are employed, out of the economy suddenly. That's what I'm asking you about."

"I don't want to wade into a very hot political discussion," Powell responded.

"The workforce is now growing at only about 0.5 percent per year, and some of that has been from immigration, so to the extent you care about potential growth, you need to be considering that in your discussions about immigration," Powell said.

Ellison said it appeared Powell was saying that removing those 700,000 people would "cause problems."

"I'm just not going to comment on that particular situation," Powell said.

That answer did not please Ellison, who also serves as deputy chairman of the Democratic National Committee.

Ellison suggested Powell could pretend the 700,000 people went to Mars in his response.

"In fairness, congressman, I really am not going to get into the debate over DACA," Powell said. "I'm just not going to do that."

Ellison finally asked Powell what it would mean to have a group of people "in their prime working years suddenly disappear from the economy."

"You would lose some productivity from that, some output from that," Powell said.

"Thank you very much," Ellison said.