The ad debuted Thursday morning on the Today Show on NBC. It features the story of Amy P. from Columbus, Ohio, who was over-prescribed Vicodin following a knee surgery. When her prescription eventually ran out, she crashed her car to obtain more drugs. The ad depicts a reenactor, portraying Amy, ramming her car into a dumpster.

"I didn't know it would be this addictive. I didn't know how far I'd go to get more," the voiceover says just before Amy's crash.

The ads will feature real stories of Americans who have made similarly drastic decisions motivated by opioid addiction, according to information provided during a press briefing Thursday morning. The stories were selected to put faces to the overwhelming number of opioid-associated overdose deaths each year: more than 42,000 in 2016, according to the CDC.

"The stories you will see in these ads sadly are not unique. Each one is an example of similar stories playing out all across this country," said Jim Carroll, the acting director of the Office of National Drug Control Policy.

The ONDCP is partnering with the Ad Council and the Truth campaign to produce the ads; the funding for the ads comes from the three groups, although the bulk is from the Ad Council and Truth. The ads are designed in the style of past Truth advertisements, part of the organization's work on reducing smoking among teens.

That work has been surprisingly successful: a study of teens following Truth's 2014 "FinishIt" campaign found that "Truth ad awareness is significantly associated with increases in targeted anti-tobacco attitudes as well as reduced intentions to smoke over time, holding constant baseline attitudes and intentions."

The ad campaign will target primarily opioid abuse and dependency among Americans 18 to 21, according to Counselor to the President Kellyanne Conway. She also suggested that an additional "halo" audience of Americans 15 to 34 would be the target of data-driven ad service.

"Our goal is to show young Americans the danger of misusing opioids, and how quickly one can become addicted to opioids," Conway said.

Those groups represent only a subset of all opioid overdose deaths, which tend to strike Americans over 35 as readily as younger adults. Indeed, data from the Center for Disease Control show that as of 2016, Americans 18 to 21 represented only a small proportion of overall opioid deaths. 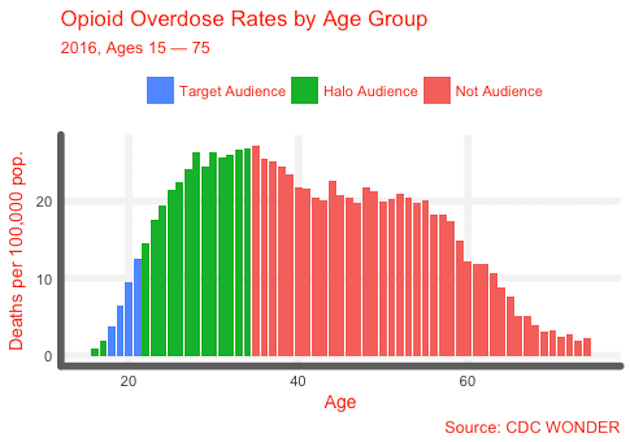 Pressed about the choice to make young people the focus of their ads, Truth Initiative CEO Robin Koval said that opioid abuse was not restricted to Americans over 35, and that Truth opted to focus its ads on the population they had had the most success with in past.

Data from the 2016 National Survey on Drug Use and Health (NSDUH) indicate that opioid abuse may be a prevalent issue among young people, even if overdose death isn't: 7.3 percent of Americans age 18 to 25 report misuse opioids in the past year, compared to four percent of those over 26; similar numbers hold for pain reliever misuse. (NSDUH does not provide by-age breakdown past age 25.)

Kovall noted that young people's opioid abuse may be facilitated by sharing with friends. NSDUH found that 53 percent of people age 12 and over who reported misusing opioids in the past year obtained them from a friend or relative, including 40.4 percent who were given those drugs for free.

The ad campaign is the culmination of months of work by the Trump administration, Ad Council, and Truth campaign. President Donald Trump made an ad campaign one of the three "prongs" of the anti-opioid strategy he announced in March; the same idea was recommended by the President's Commission on Combating Drug Addiction and the Opioid Crisis in November. Previous reporting indicated that the campaign has already been focused grouped, indicating that the roll-out of future ads should be expected soon.