Seven in 10 felons register as Democrats

A bill has been introduced in the U.S. House of Representatives that would restore the voting rights of convicted felons.

The No One Can Take Away Your Right to Vote Act of 2016 was introduced by Rep. Alan Grayson (D., Fla.) and would amend the National Voter Registration Act of 1993 to prohibit states from "disqualifying individuals convicted of criminal offenses, other than individuals convicted of murder, manslaughter, or sex crimes, from registering to vote or voting in elections for Federal office."

Grayson, who is running for the Democratic nomination for Senate in Florida, said that he introduced the bill to give felons a second chance. He added that felons are entitled to equal protection under the law.

"It’s a bill about redemption, about giving second chances and about closure," Grayson said. "We can’t have first-class citizens and second-class citizens in America. "Under our Constitution everyone, even convicted felons, are entitled to equal protection under the law."

Florida is home to 1.5 million individuals who cannot vote due to their felony convictions—the largest number in the United States.

The Public Interest Legal Foundation, an Indiana-based election integrity group, said that the Constitution’s Fourteenth Amendment affirmatively allows states to remove voting rights of people who are convicted of crimes.

"Amending the National Voter Registration Act would not, and cannot, trump what the Constitution expressly permits," the group said.

The legal group noted that a majority of felons identify as Democrats. Seven in 10 felons register as Democrats, according to a recent study by professors at the University of Pennsylvania and Stanford University.

"Democrats would benefit from additional ex-felon participation," the study concluded.

States have a number of different laws related to criminal voting. Felons in Maine and Vermont do not lose their right to vote even while they are in prison.

In the District of Columbia and 38 states, most ex-felons regain their right to vote after their sentence is complete, according to the National Conference of State Legislatures.

Virginia Gov. Terry McAuliffe (D.) recently announced an executive order to restore the rights of 206,000 felons around the state who completed their prison sentences and paroles or probations as of April 22.

"The singular purpose of Terry McAuliffe’s governorship is to elect Hillary Clinton," Virginia Speaker of the House William J. Howell said after the executive order was announced. He added that McAuliffe’s current role as governor "has always been a stepping stone to a job in Hillary Clinton’s cabinet."

A recent Washington Post investigation found that the executive order restored the franchise of ineligible felons, including several who were still in prison or on probation. The state claims it has since corrected the errors. 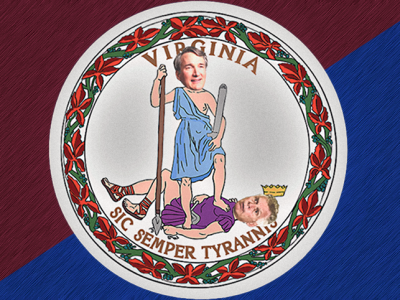