"I personally don't think that a border wall is in and of itself immoral," Coons told "Fox News Sunday" anchor Chris Wallace. "What I think the speaker may have been referring to is some of the immoral immigration policies of the Trump administration, forcibly separating children from parents at the border and detaining children's and cage-like facilities. The humanitarian crisis I think may have been what she was referring to."

President Donald Trump and Congress remain at an impasse over funding for Trump's proposed wall along the southern border. The standoff has resulted in a partial government shutdown that is now in its 23rd day. Trump gave an Oval Office address last Tuesday arguing there is a crisis at the border and that a physical barrier is necessary in order to secure it.

Pelosi and other Democrats have expressed opposition to any funding for a wall, with Pelosi in December calling a border wall "immoral."

Wallace highlighted that in the past Coons voted for legislation that funded some form of physical barriers along the border.

"You have voted for a border barrier in the past and I've been looking at your records, so let's put it up on the screen. In 2013 as part of comprehensive immigration reform, you supported $46 billion for border security including 350 miles of new fencing. In 2018, last year, you and most Senate Democrats approved $25 billion for border security, including physical barriers," Wallace said.

He asked why Democrats can't make a deal that would fund some fencing while receiving concessions on a solution for recipients of the Deferred Action for Childhood Arrivals (DACA) program and other immigrants under temporary protected status (TPS).

"Chris, it would be great. if we could reach a resolution to our country's broken immigration system and find a path forward. We all agree to invest in border security, in new technologies and approaches that would actually make us safer," Coons said. "One of the challenges of negotiating with President Trump, as [Sen.] Lindsey Graham knows better than anyone else, is I feel like I've signed up for the ‘Trump of the Day' club. I don't know what position we will get on a negotiation from day one today to go."

Some Democrats have expressed interest in finding a deal that would fund some type of physical barrier in order to reopen the government. 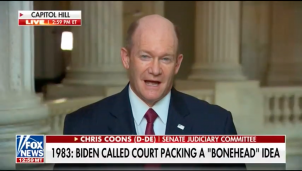 Coons Dismisses Biden’s Criticism of Court Packing: ‘Joe Does Have a Way With Words’