Number of Children Illegally Crossing Border Up 1,200 Percent Between2011 and 2014

The number of children apprehended on the U.S. border attempting to immigrate illegally has surged more than 1,200 percent since 2011 and the number of these children crossing the border during 2016 could be another record, according to a newly released government report.

The number of unaccompanied alien children (UACs) illegally crossing the U.S. border 'has increased sharply" since 2011, with a surge of more than 1,200 percent just between 2011 and 2014, according to the Congressional Research Service. The agency also disclosed that the flow has increasing significantly in the first five months of fiscal 2016.

The illegal immigration of these children hit record-breaking numbers in 2014, with U.S. officials apprehending more than 52,000 alien children. Nearly 20,000 have been apprehended in the first five months of 2016, setting the stage for another potentially record-breaking year.

'This unexpected surge of children strained U.S. government resources and created a complex crisis with humanitarian implications," the report said. 'They increased in the first five months of FY2016, however, and experts warn that significant migration flows will continue until policymakers in the countries of origin and the international community address the poor socioeconomic and security conditions driving Central Americans to leave their homes."

The illegal immigrant surge was composed mostly of children who had fled from Central American nations—including El Salvador, Guatemala, and Honduras—before making their way to the United States across the Mexican border.

The surge has led the Obama administration to request at least $1 billion in fiscal 2016, according to the report. More than $770 million is expected to be allocated through 2017.

'U.S. apprehensions of unaccompanied children remain at elevated levels, placing strains on government resources and raising concerns domestically and internationally about the safety and protection of the children," the report said.

Analysts warn that the flow of illegal children will only increase as a result of poor economic conditions in Central America and a U.S. immigration policy that is viewed as advantageous to illegal immigrants.

'Many analysts warn that elevated levels of migration from the region are likely to continue until policymakers in the countries of origin and the international community address the poor security and socioeconomic conditions in the northern triangle," according to the report, which noted that 'perceptions about U.S. immigration policies" have contributed to the rise.

The problem has been further complicated by the U.S. government’s inability to conduct mass deportations of those apprehended at the border. This is due in part to inefficiency in many Central American countries.

'None of the governments have effective means of tracking deported children after their return," according to the report. 'The countries have very few programs to reintegrate the children into society, ensure their safety from domestic abuse or societal violence, keep them in school, or help them find jobs. Without any of those conditions assured, many children are likely to try to migrate again."

Immigration and Customs Enforcement deported just '178 unaccompanied children to El Salvador, 544 to Guatemala, and 419 to Honduras, for a total of 1,141 children" in fiscal year 2015, the report states.

More than 28,300 unaccompanied children were apprehended at the border in that year.

'Despite the limited number of unaccompanied children deported thus far, all three countries have reported that their resources are strained trying to keep up with the demand for services resulting from overall increases in deportations, especially from Mexico," the report said. 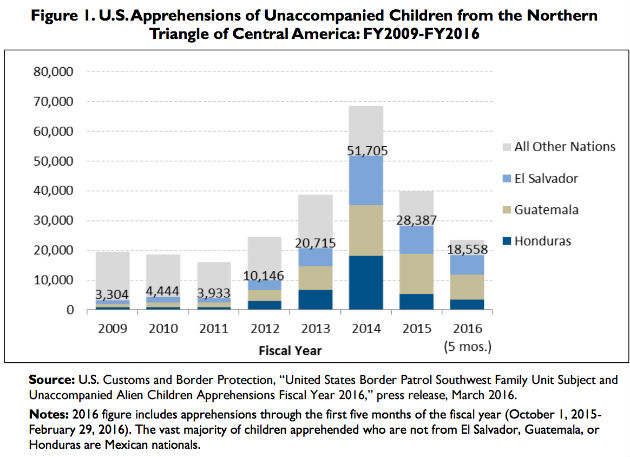 Studies have found that in 2014, during the surge in unaccompanied alien children, the United States deported just three alien children for every 100 it apprehended.

This has stoked concerns among Central American governments that 'minors will be deported in numbers larger than the receiving countries are equipped to handle," the report found.

The United States has footed a large portion of the bill to increase border security and bolster the ability of Central American governments to stem this flow.

As of February, the State Department has awarded $20 million in assistance to strengthen Mexico’s southern border. This includes 'nonintrusive inspection equipment, mobile kiosks, canine teams, and training in immigration enforcement," according to the report.

U.S. assistance to Central America will likely total $748 million in fiscal 2016 and is expected to total more than $771 in fiscal 2017, according to government projections.