Gordon, like other Sanders staffers and surrogates, backs the Boycott, Divestment, and Sanctions movement, which aims to destroy Israel through economic means.

ANGRY AND CONFUSED … "‘I’m Sorry, Excuse Me’: Biden Off by 40 Years, Mistakes 1976 for 2014," by WFB’s Paul Crookston: "There's the Dreamers program, there's also a program that said we're not going to separate families, we're going to allow families to stay together while they go through the process, and the Court said you can't … We did that in 1976," [former vice president Joe Biden] said.

Biden raised his voice and approached the man, calling him a "damn liar." He even challenged him to a push-up contest.

HOUSTON, WE HAVE AN OPTICS PROBLEM … "The Next Debate Stage Won’t Look Like the Democratic Party," via THE ATLANTIC: For a political party—and a country—whose minority population is growing, this is a problem. How did we go from a debate stage early last summer that was the most diverse in history to a race where all the leading candidates are white?

"A media narrative has emerged that says, ‘In order for Democrats to win, they really need to get working-class whites in the Midwest,’" [Julián] Castro [said]. "And what people are taking from that is, ‘Well, only a certain profile of candidates go and get those votes.’ There’s a big mistake that's being made. We may not see the consequence of that until 2020."

THE 2020 DEMOCRATIC PARTY PLATFORM IS SET … "Former Obama Official Floats Impeaching Trump Again If He's Acquitted," by WFB’s Alex Griswold: Neal Katyal, an acting solicitor general under Barack Obama, argued Thursday that if the Senate acquits President Donald Trump after the House of Representatives impeaches the president, the next Congress could simply convict Trump again on the same charges.

"If the Senate doesn't vote to convict Trump, or tries to monkey [with] his trial, he could, of course, be retried in the new Senate should he win reelection," the liberal attorney argued on Twitter. "Double jeopardy protections do not apply."

HILLARY’S ENDURING LEGACY … "Dem candidate Eddie Mauro dodges fake gunfire from Sen. Joni Ernst in new ad," via WASHINGTON TIMES: The ad by Senate candidate Eddie Mauro uses old footage from Ms. Ernst’s 2014 campaign ad that shows her shooting a handgun at a firing range and vowing to "unload" on Obamacare. Mr. Mauro’s ad splices the gunshots from Ms. Ernst’s ad with him being fired at while talking about campaign issues.

"She thinks it’s OK to run ads glorifying guns," Mr. Mauro says as a gunshot hits a fence post next to him. "She doesn’t seem to care that many of those guns will be pointed at our kids, our teachers, churchgoers, moviegoers, concert-goers, our police officers. Well, I care."

THINGS YOU CAN’T ORDER ON AMAZON … "U.S. Confirms Interception of Iranian Weapons, Missiles Destined for Yemen," by WFB’s Adam Kredo: Senior U.S. military commanders confirmed on Thursday that an American warship intercepted in November a shipment of Iranian-made weapons and missile components destined for Yemen, where Tehran has been arming terrorist rebel forces …

The weapons shipment represents a further escalation by Iran as it seeks to arm anti-American terrorist factions across the Middle East. The weapons and missile parts seized by U.S. military personnel are among the most sophisticated officials have seen.

SO MUCH FOR COLLUSION … "U.S. Mulls Withdrawal From Open Skies Treaty," by WFB’s Adam Kredo: In recent years, the treaty has caused consternation among the highest levels of the U.S. national security community due to Moscow’s repeated and increasingly severe violations, including deploying advanced technology that can be used to conduct espionage operations.

Senior administration officials told the Washington Free Beacon that the president is considering pulling out of the treaty due to Moscow's continued noncompliance.

AN ATTACK DOG AMONGST THE LAPDOGS … "Pelosi Snaps At Reporter Who Asked If She "Hates The President," via RCP: In response to a question from reporter James Rosen at a press conference Thursday morning, House Speaker Nancy Pelosi left the podium and approached the crowd, pointing her finger and shouting.

"Do you hate the president?" the Sinclair TV reporter asked.

"I don't hate anybody," she said. "Not anybody in the world." 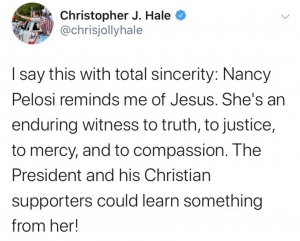 MAYBE SOME PEOPLE DO HAVE TOO MUCH MONEY … "Artist sells banana duct-taped to wall for $120,000 at Art Basel in Miami Beach," via NBC NEWS: A single banana duct-taped to a wall by Italian artist Maurizio Cattelan intrigued some art aficionados while baffling others. The work's first edition apparently came from a local Miami supermarket and sold for $120,000 by Perrotin, an international art gallery, according to Artnet.com.

Other editions of the art reportedly sold for even higher prices, the site said.

FOOL’S GOLD … "Medicare For All: Progressive Campaign Killer," by WFB’s Matthew Continetti: Not only do voters recoil at the notion of having their insurance canceled, but candidates look awkward and inauthentic when they begin to move away from the unpopular idea they mistakenly embraced. That's what happened to [Kamala] Harris earlier this year, and is happening to Elizabeth Warren today …

Once thought to be the fulfillment of the age-old dream of universal health care, Medicare for All is more like one of those ingenious Acme devices Wile E. Coyote uses to catch the Road Runner. It's a catapult that launches you into the stratosphere. And right into a wall.