Top colleges throughout the United States are experiencing an unprecedented rise in anti-Semitic incidents and anti-Jewish behavior, according to a study that determined the behavior is being fueled by a rise in the number of campus organizations promoting inflammatory anti-Israel propaganda.

The survey, which focused on 113 U.S. campuses with large Jewish populations, concluded that at least 70 percent of those schools surveyed experienced "one or more kinds of anti-Semitic activity" in the past year.

There were more than 300 anti-Semitic incidents in total at these schools in 2015 alone, according to the report, which was compiled and released Monday by the AMCHA Initiative, a non-profit organization that monitors anti-Semitism on campus.

The rise in the number and severity of these incidents is directly related to anti-Israel activities coordinated by a pro-Palestinian organizations that support the Boycott, Divestment, and Sanctions movement, or BDS, which seeks to delegitimize the Jewish state.

The study marks the first time that a statistical analysis has empirically tied these anti-Israel organizations to the sharp rise in anti-Semitic behavior on campus.

The highest level of anti-Semitic expression occurred at Northwestern University, U.C. Santa Cruz, U.C. Berkeley, and UCLA, according to the report.

Anti-Semitic activity was reported at Brooklyn College, the University of Michigan, Vassar College, Columbia University, and Stanford University, among many others. 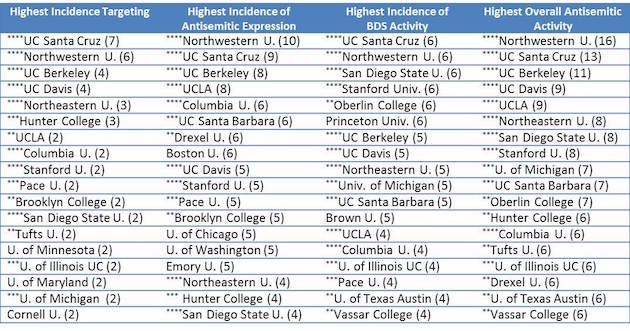 The study also found a "strong correlation between the presence of faculty who have expressed public support for an academic boycott of Israel and anti-Semitism."

The presence of an active BDS movement on campus "strongly correlates" with anti-Semitic activity on campus, the study determined.

This includes the presence of campus organizations such as the Students for Justice in Palestine, which has been suspended at several college campuses for, among other things, disseminating Nazi propaganda.

At least 56 percent of schools permitting an active BDS movement "had one or more incidents that targeted Jewish students for harm, whereas of the schools with no evidence of BDS activity, only 23 percent had incidents targeting Jewish students," according to the study.

Tammi Rossman-Benjamin, director of AMCHA, told the Washington Free Beacon that the study confirms anecdotal observations by many pro-Israel organizations on campus.

"These findings confirm what those of us monitoring campus anti-Semitism closely have long known and what students have been reporting to us for years—it is widespread, it is rising at a frightening rate, and it is fueled by anti-Zionism, particularly BDS, SJP, and faculty boycotters," Rossman-Benjamin said.

"This study must serve as a wake-up call to university leaders that there is a distinction between scholarly debate and criticism of Israel’s policies—all welcomed on a university campus—and anti-Zionism which is anti-Semitism and fuels anti-Semitic activity," she added. "It’s time university leaders acknowledge the elephant in the room."