Former president Donald Trump is the favorite to win the 2024 presidential election, according to the online betting site Sportsbook.com.

Bettors picked Trump to regain the White House in 2024 by eight-to-five odds as of Friday afternoon, less steep than any other candidate. President Joe Biden was the next closest candidate with seven-to-one odds, followed by Florida governor Ron DeSantis (R.) with eight-to-one odds. Vice President Kamala Harris and Transportation Secretary Pete Buttigieg were tied as the fourth most favored candidates. Their odds were 20 to 1. 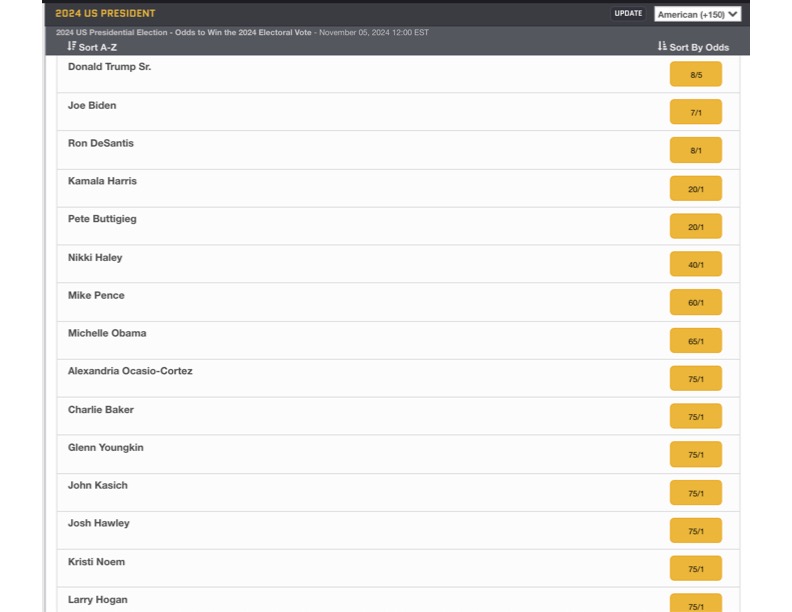 Optimism over Trump's candidacy has risen steadily since October, when he overcame Biden as the odds-on favorite to win the presidency, according to the Las Vegas Review Journal. Electionbettingodds.com, an aggregator of betting sites FTX.com, Betfair.com, Smarkets.com, and PredictIt.org, gives the former president a 28-percent chance of recapturing the Oval Office. It gives Biden a 17-percent chance and Harris a 10-percent chance.

Biden has said he will run for president in 2024 if he is in "good health." A majority of Democratic voters want him to run for reelection, according to a December Politico/Morning Consult poll. He has also said running against Trump would "increase the prospect" of a second term.

"Why would I not run against Donald Trump as the nominee?" Biden told ABC News's David Muir in December. "That would increase the prospect of running."

Biden's approval rating has plummeted during his first year in office, driven by his administration's handling of the southern border crisis, the botched U.S. military withdrawal from Afghanistan, and his failure to declare victory over the COVID-19 pandemic.

Republicans are also heavily favored to recapture the House and Senate in the 2022 elections, according to Electionbettingodds.com. About 70 percent of bettors predict the GOP will win the Senate, and 83 percent predict the Republican Party will win the House.

Trump has not declared his 2024 candidacy. He said in December that if he doesn't run, however, his "base is going to be very angry."

A majority of Republican voters want him to run for a second term, according to a Politico/Morning Consult poll in December.