Democrats promised Georgia wins would put $2,000 checks in the mail

On the eve of the Georgia runoffs, soon-to-be President Joe Biden told voters that sending Democrats Jon Ossoff and Raphael Warnock to the U.S. Senate would put $2,000 stimulus checks in the mail.

"Their election will put an end to the block in Washington on that $2,000 stimulus check," Biden said. "That money that will go out the door immediately to help people who are in real trouble."

Two months later, stimulus checks still have not been sent, and Senate Democrats have kiboshed plans for $2,000 checks. The Biden administration and Democratic leadership agreed on Wednesday to scale the stimulus checks down to $1,400, a shift that has been in the works since just after Ossoff and Warnock were elected.

In January, Biden’s transition team argued that $1,400 checks in addition to the already-issued $600 checks would be the same as the promised $2,000 checks. And in February, Democratic Majority Leader Chuck Schumer (N.Y.), with both Ossoff and Warnock standing behind him, advocated for the slimmed-down $1,400 check, making the same argument about reaching a cumulative $2,000 in stimulus.

The shift to $1,400 checks comes despite repeated campaign trail promises to support the full $2,000 checks by the Georgia Democrats and their national allies.

Warnock’s campaign ran ads asking voters, "Want a $2,000 check?" along with a picture of a U.S. Treasury check going out to an individual in "Anytown, USA." And Ossoff regularly called for "$2,000 checks now" and pledged to support the full $2,000 checks if elected. 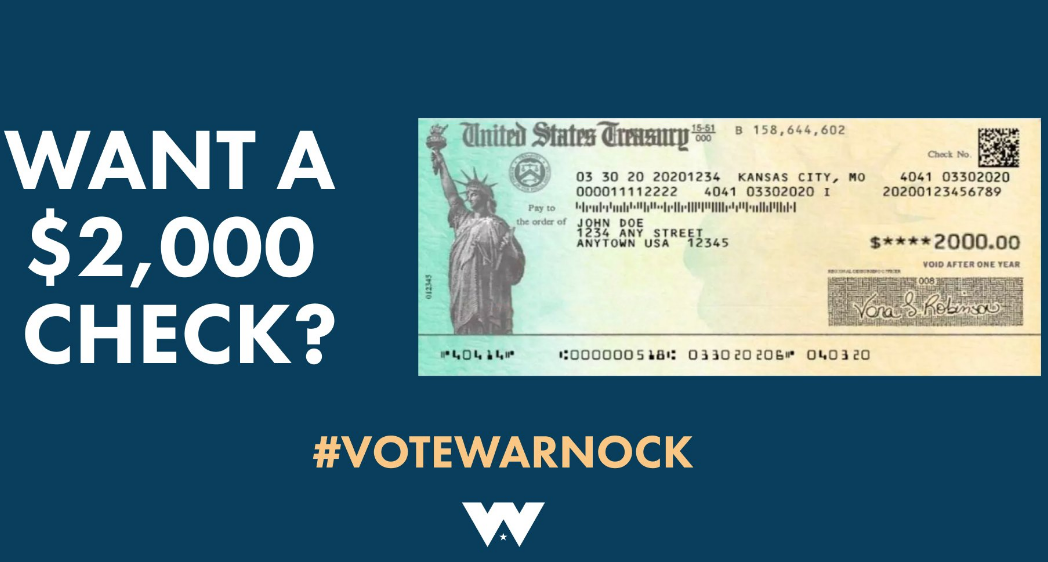 In the runoff election’s home stretch, Warnock repeated his pledge for $2,000 even after President Donald Trump signed the COVID-19 bill that sent $600 checks to eligible recipients. And he continued to back $2,000 checks after winning office. The day after he was elected, Warnock told NPR that "we ought to pass the $2,000 stimulus."

Neither Sens. Ossoff nor Warnock’s offices responded to requests for comment about the shift to $1,400 checks.

Senate Democrats currently plan to move on the updated bill "as early as tonight." While Ossoff and Warnock have not yet commented on it, both are expected to support the compromise bill along with their Democratic colleagues.