Less than a week after President Joe Biden in his State of the Union address called for Americans to return to the office after two years of COVID-19 restrictions, numerous Democratic offices in both the U.S. Senate and House of Representatives have failed to end their work-from-home policies.

A Washington Free Beacon investigation after Biden's speech found that many Democratic offices completely closed and unstaffed, with several displaying signs that they were not returning to work due to COVID-19. Included among the shuttered offices was none other than that of Senate Majority Leader Chuck Schumer (D., N.Y.). In the middle of the workday his front desk was unstaffed, and there was nobody in sight. His office did not respond to a request for comment about when its teleworking policy would end.

The office of Sen. Catherine Cortez Masto (D., Nev.), who faces a tough reelection battle in the fall, was closed as well, with a sign on the door that says, "Cleaning not required." Sen. Bernie Sanders (I., Vt.), who chairs the budget committee, has also kept his office closed and put a sign on his door with text stating the closure was part of "an effort to prevent the spread of germs and bacteria." Neither Cortez Masto's nor Sanders's office replied to a request for comment.

The vacancies came days after Biden spoke to a maskless crowd of lawmakers urging Americans to put pandemic measures, such as teleworking, in the rear-view mirror. "It's time for Americans to get back to work and fill our great downtowns again," Biden said. "People working from home can feel safe to begin to return to the office." The line earned a standing ovation from Democrats in the crowd.

Biden's call for workers to return to the office was seen as an attempt to instill a sense of normalcy in the country following numerous polls that show Americans growing weary of COVID-19 restrictions. Many Democratic governors and mayors, including Washington, D.C., mayor Muriel Bowser, have called on employers to end their work-from-home policies, citing the damage it inflicts on local businesses.

Some Democrats told the Free Beacon that they are working on a hybrid schedule, with staff teleworking several days a week. Other offices that still offer a work-from-home option, such as that of Sen. Sheldon Whitehouse (D., R.I.), will not accept visits from constituents "out of an abundance of caution." The same policy goes for Sen. Patty Murray (D., Wash.), whose office is fully closed on Monday and Friday. 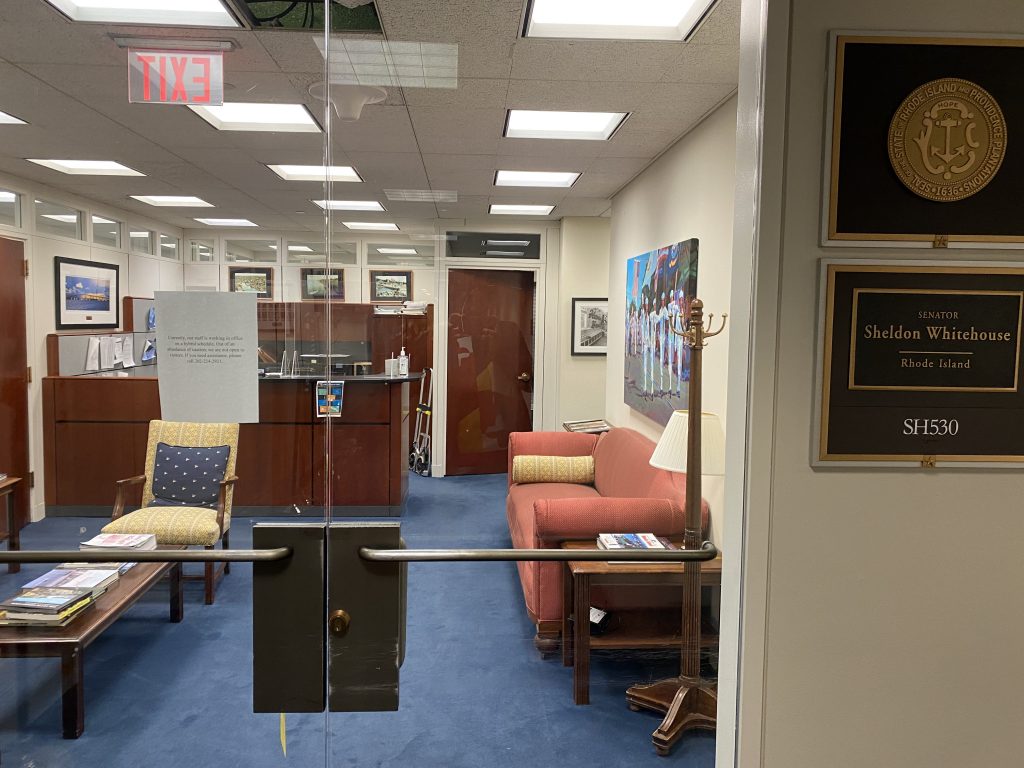 Other Democrats have embraced what critics call "COVID theater." Both Sens. Debbie Stabenow (D., Mich.) and Bob Menendez (D., N.J.) have signs on the front of their offices that warn visitors to avoid handshakes. Neither office responded to a request for comment. Committee rooms, such as that of the Senate Health, Education, Labor, and Pensions Committee, chaired by Murray, were also closed, with a sign that says teleworking is in effect to stop the spread of "germs." 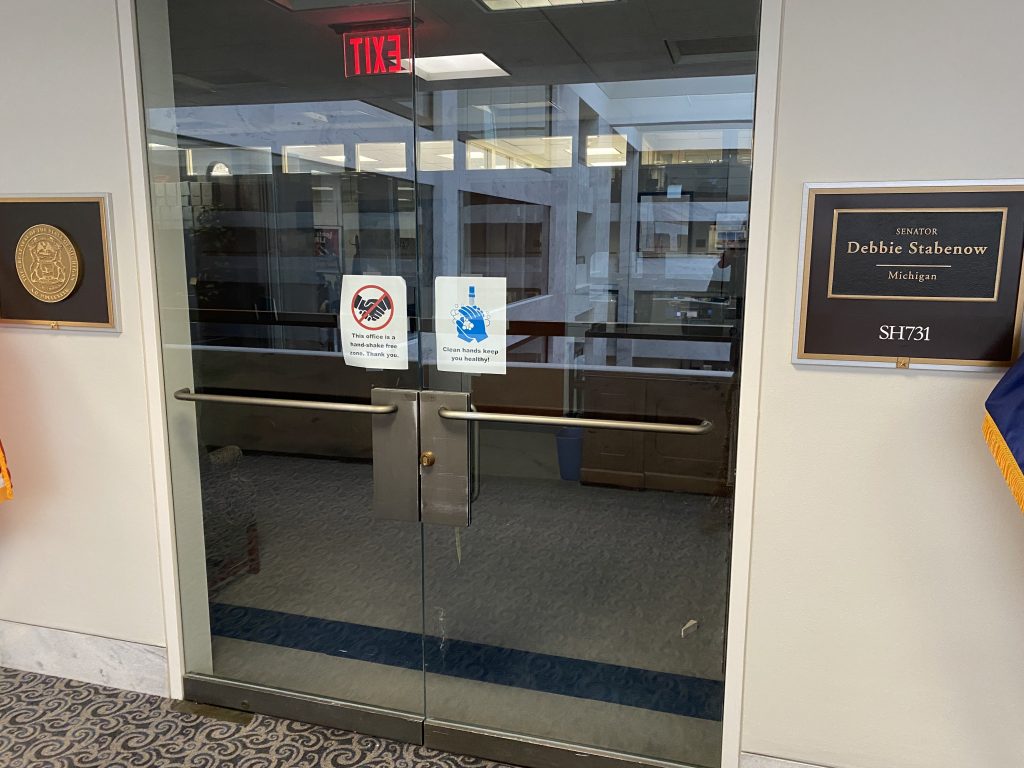 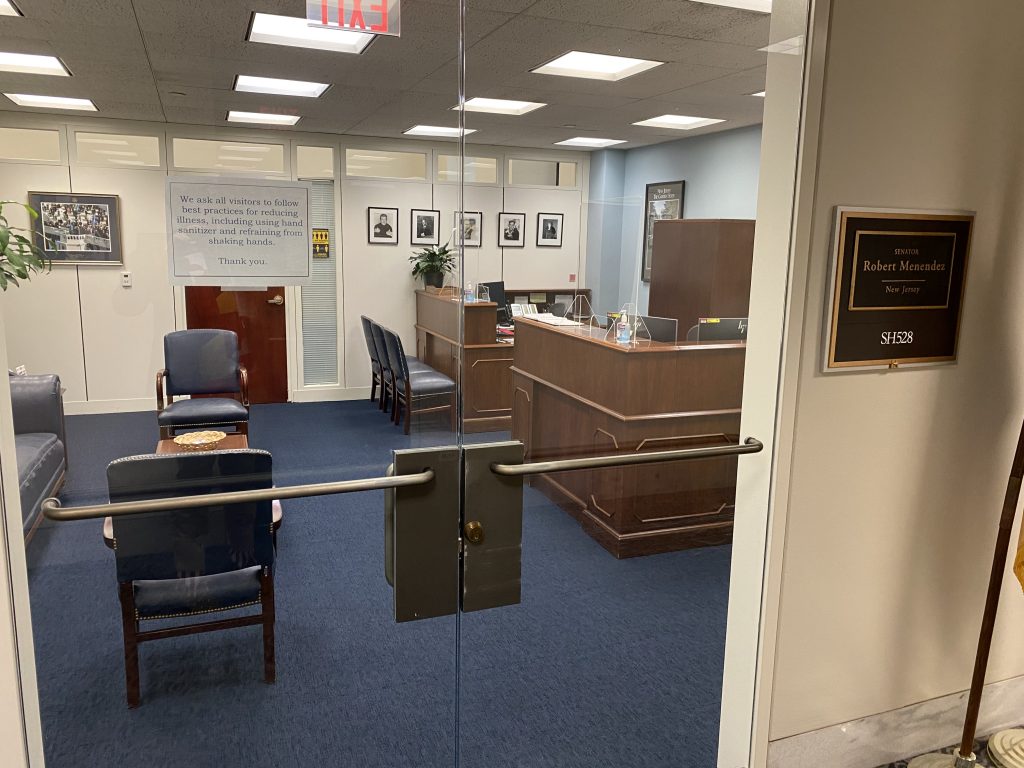 In total, six Senate offices have signs outside their doors indicating that no staffers work in person. Another six offices appeared closed, with no staff at the front desk and in some cases, such as Sen. Alex Padilla's (D., Calif.) office, the lights off. Padilla's office did not respond to a request for comment.

On the House side, dozens of offices appeared to be in work-from-home mode. Rep. André Carson (D., Ind.) has a sign on his door, adjacent to a large "refugees welcome" sign, that indicates that both Carson and his staff are working remotely "to help slow the spread." Rep. Jennifer Wexton (D., Va.) has a sign that alerts visitors her office is "operating remotely" due to "ongoing public health concerns."

The status of Rep. Alexandria Ocasio-Cortez's (D., N.Y.) office was unclear, although its door featured a sign that asks visitors to wear a mask and another that says the office's occupancy limit is two people. There was a stack of mail outside Ocasio-Cortez's door in the afternoon. Her office did not respond to a request for comment. 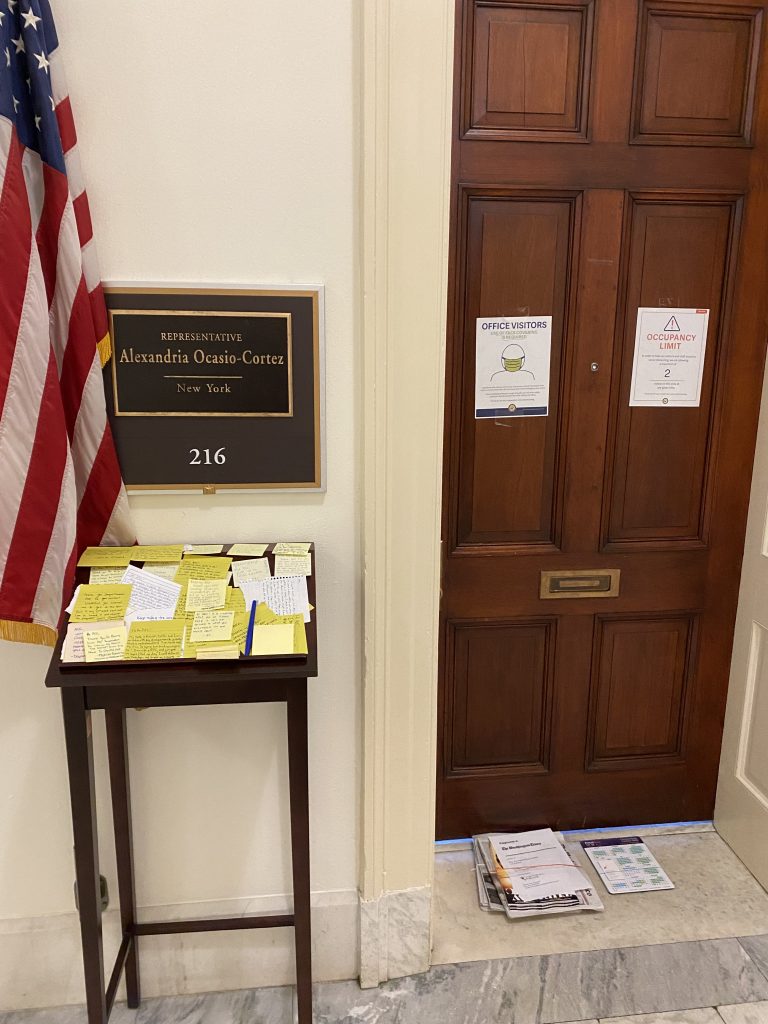 The decision to work remotely is enabled by Democratic leadership, which put into place a proxy voting system that has allowed voters to vote without showing up to work. One Florida Democrat, Rep. Frederica Wilson, failed to register a single in-person vote in 2021. Her office remains closed. 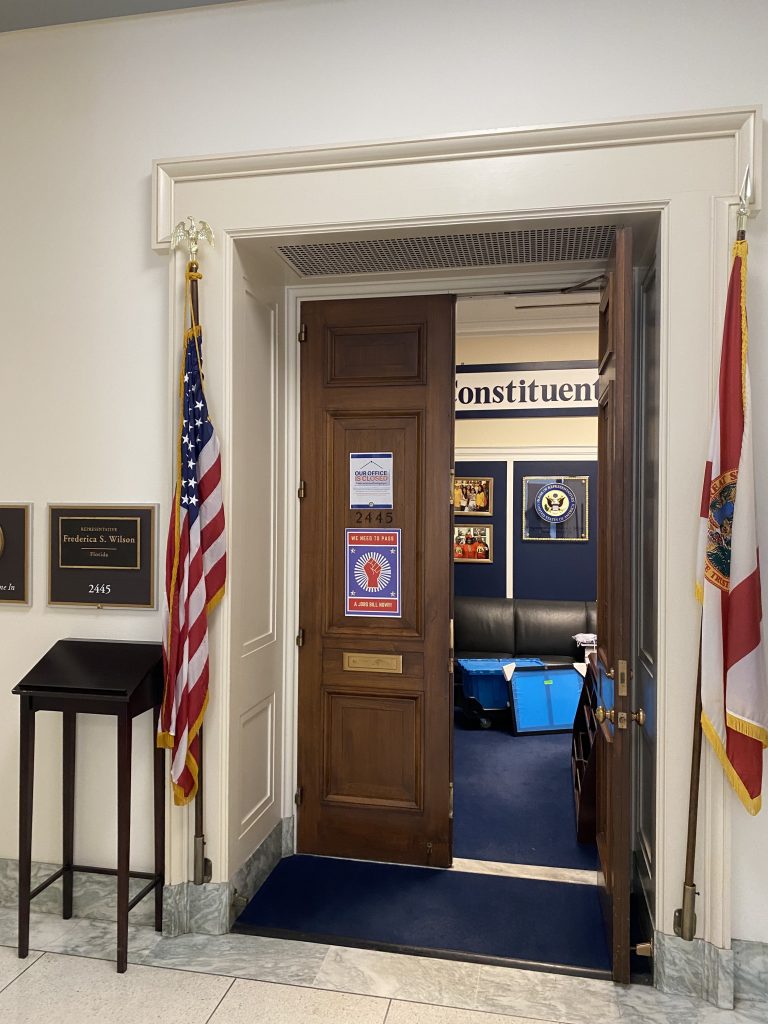 The fight to emerge from pandemic restrictions is gaining traction on the Democratic side of the aisle. Senate legislation to remove mask mandates still in place for airplane travel received eight Democratic votes, but Biden says he will veto the bill if it gets to his desk.