Congressional Black Caucus chair Karen Bass (D., Calif.), who is leading Democratic police reform efforts, accepted thousands from an attorney who worked to block the release of a video showing the fatal police shooting of a black teenager.

Chicago attorney Steve Patton sent the maximum primary contribution of $2,800 to Bass's campaign and another $2,800 to the Democrat's joint fundraising committee this cycle. Patton was the Chicago city hall attorney who tried to suppress the dash-cam recording depicting the events that led to 17-year-old Laquan McDonald's death in 2014. Failed Democratic presidential candidate Pete Buttigieg faced intense scrutiny last year after it was discovered that he had taken campaign cash from the lawyer. Buttigieg returned the money and canceled a fundraiser following a media firestorm.

Bass is now leading the congressional charge for federal police reform following the death of George Floyd. The California congresswoman has said reforms will come quickly and will focus on "accountability." She was among a handful of Democratic politicians to unveil a bill earlier this week aimed at overhauling police practices. At a Monday press conference, Bass said that no one should have to see "the slow murder of an individual by a uniformed police officer."

Patton pushed to make sure no one saw video of the murder of McDonald. In 2014—when he worked for then-mayor Rahm Emanuel—Patton fought the release of the video evidence that ultimately led to the conviction of Jason Van Dyke, a white Chicago cop who shot the black teenager 16 times. The event set off protests across Chicago.

Chicago police had maintained that McDonald was armed with a knife and "lunged" at the officers prior to Van Dyke opening fire. One year after the event, however, a judge ordered the video's release. The footage showed McDonald walking away from the officers and carrying a pocket knife. Van Dyke was convicted of second-degree murder. He was sentenced to nearly seven years in prison.

The case found itself back in the national spotlight last year when the Associated Press reported that Patton had given campaign contributions to Buttigieg and was set to cohost a fundraiser for the South Bend mayor.

Buttigieg, facing an onslaught of negative media coverage, dumped the contributions and canceled the fundraiser. "It's frustrating," he said of the donations. "I'm going to figure out how it happened and make sure it doesn't happen again, but these things do happen and we accept responsibility and keep going."

Bass's campaign and the treasurer of the Democrat's civic action fund did not respond to inquiries. Patton did not return a request for comment on the donations. 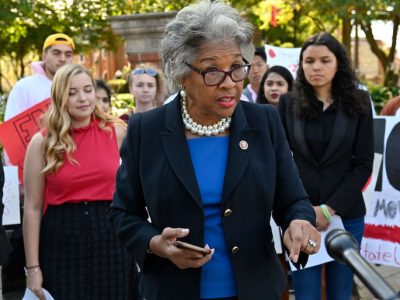