A Democratic Boston city councilor is under fire for informing her constituents that they are "letting the Zionists SHAKE YOU DOWN," rhetoric that a watchdog group says is grossly anti-Semitic.

"Ya'll are letting the Zionists SHAKE YOU DOWN," Boston city councilor Kendra Lara tweeted on Thursday, referencing a court decision this week that upheld a law targeting the anti-Semitic campaign to boycott Israel. She later deleted the tweet. 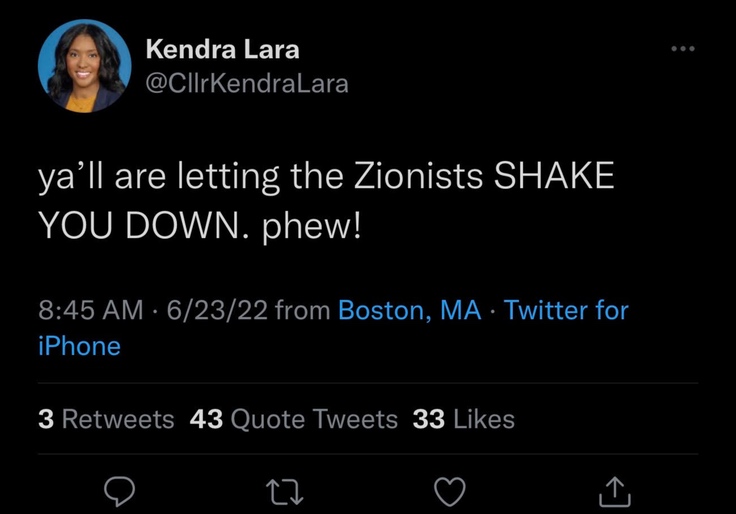 Lara—a member of the Democratic Socialists of America and an ally of "Squad" member Ayanna Pressley (D., Mass.) who took the far-left congresswoman's "policy pledge"—quickly came under fire for the tweet, with one user of the social media site saying her language is identical to that used by "neo-Nazis and Holocaust deniers."

"Oh I get it! The use of the phrasing was lost on me but I have been told now, thank you!" she tweeted in response.

Later that day, she clarified that she was talking about a federal court's ruling this week to uphold an Arkansas law that bars the state government from contracting with an entity that supports the Boycott, Divestment, and Sanctions (BDS) movement, which wages economic warfare on Israel. Then she issued copious apologies, saying that reinforcing "anti-Semitic tropes about the Jewish people" was not her intent and that she "should have known better." She then deleted her original tweet.

Lara is one of many far-left activists to condemn the anti-BDS court decision. The decision is seen as a bellwether for other anti-BDS laws that are being challenged by anti-Israel forces across America.

Lara's comments are a thinly veiled shot at American Jews, according to Rabbi Abraham Cooper, associate dean of the Simon Wiesenthal Center, a watchdog group that combats anti-Semitism.

"Will the city councilor be held accountable for her slur by her peers, by the media, by the voters, for this screed?" Cooper said in comments to the Washington Free Beacon. "Why would a local politician in Boston get worked up over an Arkansas court upholding anti-BDS laws—an important tool to fight back against anti-Semitic BDS? Maybe because she hates 'Zionists'—read Jews."

Lara has repeatedly used this type of rhetoric in the past.

When Ben & Jerry's pulled out of Israel as part of its support for the BDS movement, Lara mocked pro-Israel advocates who launched their own boycott of the company.

"Zionists: *Googles how to ethnically cleanse ice cream company*," she tweeted in July 2021. The tweet is a reference to unfounded accusations by anti-Israel activists that Israel is engaged in the genocide of Palestinians. These types of remarks are widely considered anti-Semitic. 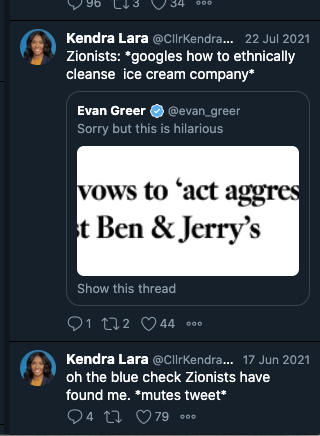 Cooper said that Lara's rhetoric embodies "two of the most distressing aspects of anti-Semitism today in America"—"violent Jew-hatred" and the "increasing of open, blatant Jew-hatred in the mainstream of our society."

There is "little or no accountability or consequences" for targeting Jewish people in this way, Cooper said, adding that "anti-Semitic hate crimes"—which are rising at steep rates—"don't happen in a vacuum."

Neither Lara nor Pressley responded by press time to a Free Beacon request for comment.