This Father’s Day, Thank Dad for His Hard Work

Dads are sometimes labeled lazy, but they don't deserve to be, a new research brief from the Institute for Family Studies argues.

In the past several years, both entertainment media and the think-piece-industrial complex have tended to paint a not-so-friendly pictures of dads. Moms are said to be suffering under "second-shift motherhood," while the "working dad" commands less and less respect, thanks to the perception that he does not pull his weight.

But is every dad really a shiftless Homer Simpson? Not quite, according to new work by IFS research fellow Robert VerBruggen. In honor of Father's Day, he looked at data from the American Time Use Survey (ATUS), a time diary study that tracks how Americans spend our days.

"Among married couples living together with kids, if anything, it's dads who do more work in total—adding up paid work, housework, child care, and even shopping," VerBruggen wrote. "Moms do work more in some specific circumstances, but the data acquit fathers as a group of the slacking charges so frequently leveled against them."

To reach this conclusion, VerBruggen looked at the behaviors of respondents to the ATUS who were married, with kids, and living with their spouse. Combining data on how much time parents report spending at work, doing household chores, and caring for kids shows that in the aggregate men outpace women. Specifically, dads do about 59 hours of work per week, while moms do about 55.

Part of this finding is a function of difference between the two groups—if moms are more likely to stay home and work less, and dads go to the office, that could explain the gap. But VerBruggen compared working moms and dads apples-to-apples and found that in all but one configuration, dad put in more time. 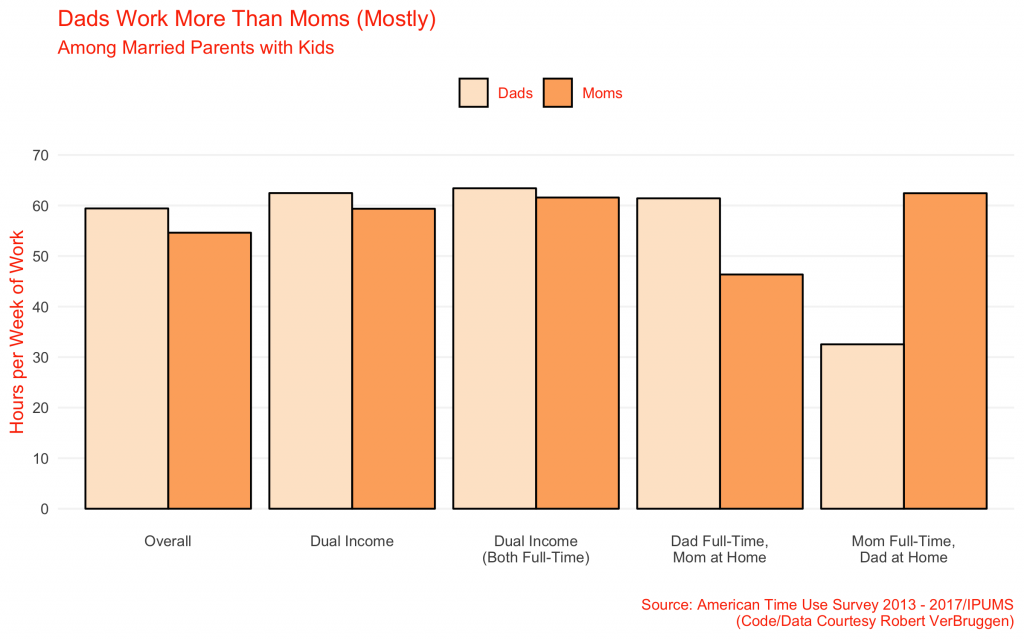 The above chart shows that when mom and dad both work—even when they both work full-time—dad works slightly more. Only in one situation (to be discussed below) do dads do less work: when they are staying at home, while their wives work full-time.

It is worth emphasizing that VerBruggen looked only at married different-sex couples with kids. These data do not, for example, cover the one-third of children living with a single mother; they also do not cover same-sex couples, who represent a small fraction of all married couples but tend to divide responsibilities up differently.

That said, we can understand why married heterosexual men work more in toto by breaking down work activities. Using VerBruggen's data (which he provided to the Free Beacon), we can look at three broad categories: employment, household chores, and childcare. 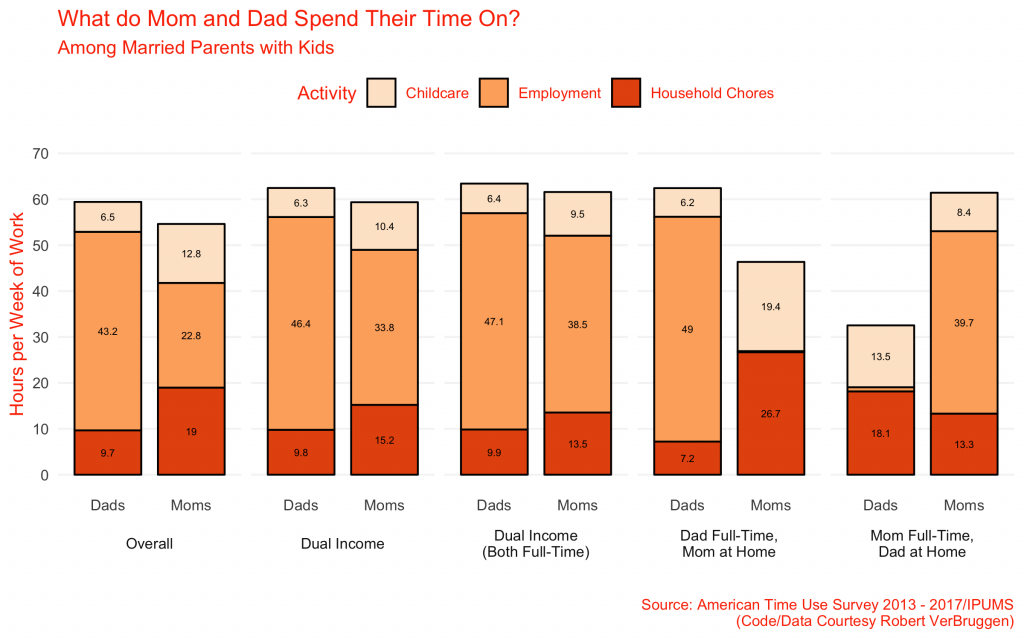 The underlying trend should be unsurprising: Men do less work at home, but more on the job, and so do more work overall. Some point to this as evidence of gender inequity, with women kept at home and men out in the workplace. But VerBruggen thinks that much of this gap is explained by preference, pointing to surveys finding that women generally prefer either no or only part-time work, and evidence that such disparities exist even in highly gender-equitable countries like Sweden. What is more, even if preferences do not adequately explain the gap (and systemic factors are at play), it would only be fair to call dads lazy if labor force work is less strenuous or valuable than household work, a claim few would agree with.

The gender labor gap has persisted even as the American labor/household division has become more gender-equitable. According to the Pew Research Center, the number of dual-income families has risen from 49 percent in 1970 to 66 percent in 2016 (VerBruggen's previous research has explored the class composition of these new working moms).

But the gap has shrunk some: Pew found that dads today spend 2.5 times longer on housework and 3.2 times longer on childcare than they did in 1965. In other words, dads have taken on more household responsibilities while still doing the lion's share of the job-market work, a reality which helps explain why they do the most work in total.

What about those men who stay at home? VerBruggen specifically isolated respondents to the ATUS who both did not work and were not disabled. His finding replicates the conclusions of political demographer Nicholas Eberstadt's monograph Men Without Work, which finds that men out of the labor force spend substantially less time on childcare and household chores than their female counterparts. What is more, the number of these men has been steadily growing over the past several decades. 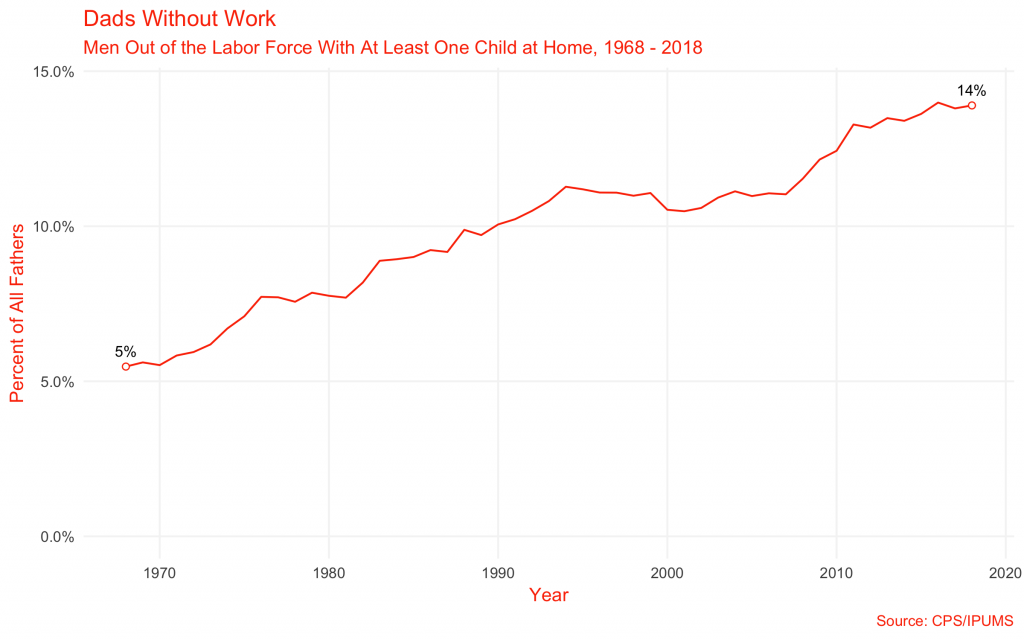 It is not clear why this is. As Eberstadt recently argued, we do not even really have the numbers needed to tell us. And there is an open debate about why those men have dropped out of the labor force, whether they can be induced back in, and why they seem so reticent to take up household labor.

But while this share of the population is growing, it still remains a distinct minority. Most dads—at least in married families—work, and in fact do the most work on average. So, VerBruggen concludes, "we should stop whining about dads as a group not doing their share of the work their families depend upon—because that's not true."

US Jobless Claims Spike to 286,000, Highest Since October

ALERT: Even Horses Are Suffering in Biden Economy