King Edward VII loved smoking, a habit his mother detested. As Prince of Wales, he abandoned White’s, the famous gentlemen’s club, where tobacco use was restricted, and in 1868 became a founding member of the Marlborough, where it was permitted, even encouraged everywhere save the dining room. He pressed the habit upon his friends and his children and even tolerated it in his wife, Queen Alexandra, who enjoyed cigarettes while playing solitaire in the evenings.

Richard Davenport-Hines, the author of many justly celebrated biographies and the editor of Hugh Trevor-Roper’s absorbing Wartime Journals, brings sympathy and good humor to his brief life of this raffish and not entirely pleasant sovereign, which appears in Penguin’s delightful new English Monarchs series, already home to some of the most amusing and incisive short biographies since Lord Morley’s immortal English Men of Letters.

Albert Edward—called "Bertie" by his family and friends, a convention adopted somewhat naughtily here by Davenport-Hines—was Victoria and Albert’s second child, born in 1841 only 10 months after his sister Vicky. His education was a brutal and tedious affair. By the age of nine, he was studying 11 hours a day. Bilingual in English and German since birth, he had added French by the time he was six. Outside the royal household he had almost no friends his own age, and he was kept far away from sport, racing, and virtually everything else he would come to enjoy in adulthood.

When he was old enough to attend university, Albert did stints at Edinburgh, Oxford, and Cambridge, throughout which he was cloistered in rooms apart from the colleges. In September 1861, while visiting the army barracks at Carragh in Ireland, he climbed out of his window on a number of occasions to have sex with a camp follower, distressing his abstemious father to no end. The prince consort rebuked him for having "thrust[ed] yourself into the hands of one of the most abject of the human species, to be initiated by her into the sacred mysteries of creation which ought to remain shrouded in holy awe." Albert died two months later. His wife blamed their son. "Oh, that boy! I cannot never look at him without a shudder." 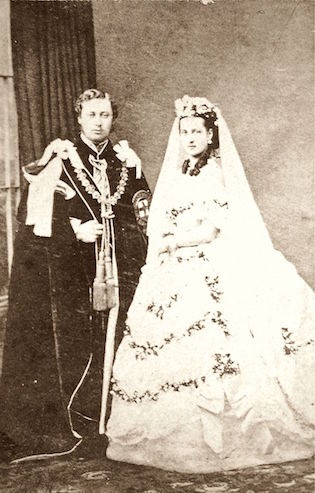 Bertie’s career as a fornicator was short lived. He married Alexandra, a Danish princess and friend of his older sister, in 1863. Adultery, however, would be a nearly lifelong, all-encompassing, continent-spanning pursuit. Though he found the idea of reading fiction utterly baffling, he was a keen theatergoer, if only because he relished the opportunity it provided for assignations with a never-ending series of actresses in London and Paris. The austere and rather saintly Marquess of Salisbury refused to extend weekend invitations to the prince unless he was accompanied by Alexandra who, by the age of 26, had given birth to six children and was rheumatic and nearly deaf. "She is my brood mare," Edward said. "The others are my hacks." His lasciviousness, abetted by contraception, only began to fall off decades later after the death of his son Clarence, at whose funeral he wept openly, in 1892.

Edward was nearly 60 years old before he ascended the throne. His mother had reigned so long that almost no one serving the crown in an official capacity remembered how to carry out a coronation. By that time Albert’s character was well established, and Davenport-Hines gives us a very full and on the whole balanced portrait of his subject, who enjoyed croquet and golf (though he was a sore loser at both), adored Wagner and Puccini, and was fond of dirty jokes and crude pranks of the trip-wire variety. He delighted in browbeating his friends into staking more than they could afford at gaming tables. He liked a good dinner—"caviar, plover’s eggs, soles poached in Chablis and garnished with oysters and prawns … boned snipe, filled with forcemeat and foie gras, grilled in a pig’s caul (the web of fat that constitutes the intestinal membrane) and served with truffles and Madeira sauce"—and would gorge himself without chewing.

But he was also a public-spirited man, a pioneer of royal philanthropy in the modern sense, a patron of some 75 hospitals, including St. Bartholomew's of which he was president, and well over 100 charities. He visited the sick personally, wrote letters of thanks to individual donors, and, later in life, was not above making sure that knighthoods and even baronets were doled out to the most generous supporters of worthy causes. He had an extraordinary talent for raising money. The sums he received—from the owners of the Guinness brewery, the Rothschilds and other financiers—are astounding. One enterprise alone—the King Edward's Hospital Fund—had £2 million pounds to its name in 1910, around £1.75 billion in today's terms. On scientific questions he sought the advice of Darwin. He was fascinated by cancer research and was an early proponent of the nascent germ theory of disease and compulsory vaccination. For obvious reasons he took a special interest in what we would now call "women’s health." Army reform and the problem of good and affordable housing obsessed him. In the company of a member of Gladstone's government he visited the London poor incognito, wearing shabby clothes. 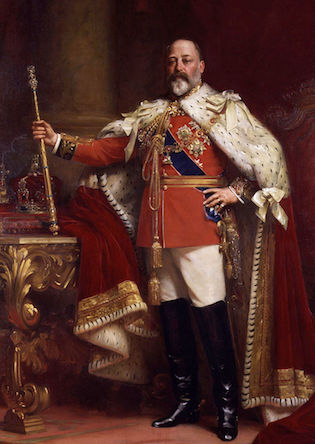 Religion is not a frequently recurring subject in these pages, but when it comes up it is always interesting. Edward’s philo-Semitism led many to sneer that he was "King of the Jews." He muttered the required disavowal of transubstantiation inaudibly upon assuming the throne and went out of his way to meet Pope Leo XIII and attend the Requiem Mass of Portugal’s King Carlos I. He also wore a Medal of the Immaculate Conception on his watch-chain. Though he was superstitious—he allowed only an even number of asparaguses to be put on his plate—he disliked spiritualism. At a shooting party in 1910, he was nonplussed when a medium relayed a message from his deceased sister Alice: "Time is short. You must prepare." He died a few months later.

Davenport-Hines is a deft and witty writer who in fewer than 120 pages has made excellent use of a wide range of sources—not only previous biographies by Jane Ridley and Giles St. Aubyn but also the immortal diaries of A.C. Benson and the writings of Henry Adams, Henry James, Rose Macaulay, and Vita Sackville-West. He is wonderful on social and political history in general—changes in fashion, the rise of postcards and weekly magazines, and the increase in the number of peerages given to businessmen. Edward VII is full of magnificent tidbits—who would have guessed, for example, that "Actors and chefs were the two occupations that grew most between the national censuses of 1901 and 1911"?

This is a marvelous little book that can and should be read in a sitting.

The Young Men and the Sea