The American dream is that any citizen, regardless of sex, race, creed, or color, can rise on his determination and merit. History is littered with examples of the reformers who worked to realize that dream, pushing the most influential institutions in the country to prize talent and hard work over wealth and connections.

The introduction of standardized testing, accessible to all American teens, was part of that push. Harvard University began administering a standardized test to all applicants in 1905. Its effect was profound and immediate: historically a landing spot for the Protestant upper crust, the school began admitting far more public school kids, Catholics, and Jews.

The increasing number of Jewish students was a major concern for Harvard president and committed progressive A. Lawrence Lowell. He tried to implement a quota on Jews, then pivoted to an admissions process that used intangible factors such as "character" and "manliness." It worked: Jewish applicants consistently fell short.

These sorts of hazy, intangible assessments are now championed by the left. In the name of racial equality, the woke now seek to dismantle meritocratic norms and return to the quota systems that practices like standardized testing were designed to relegate to the trash heap of history.

In a lawsuit likely headed for the Supreme Court, hundreds of would-be Asian admittees allege that Harvard caps their numbers with quotas based on "personality"—an eerie echo of Lowell’s method for keeping out Jews.

The New York Times’s classical music critic, Anthony Tommasini, is calling for the end of the blind symphony audition, which drove a tripling of women's representation in the field, so that conductors can make race-based selections. The University of Connecticut School of Medicine, where merit is literally a matter of life or death, recently suspended admissions to its honor society because the GPA-based admissions criterion did not produce an honor society that, as Bill Clinton said, "looked like America."

The SAT—which measures intellect better and more fairly than do intangible heuristics—is under fire. University of California president and former Obama official Janet Napolitano has joined the chorus of administrators at elite universities who complain that race-blind admissions aren’t producing the desired results.

Those calling for "progress" usually want to forfeit someone else's job. Tommasini is a white man, as are all his listed colleagues at the Times‘s "music" section. So is the L.A. Times's Mark Swed, and Washington Post music critic Michael Brodeur, who recently penned a news report about classical music's "long overdue reckoning with racism."

All are curiously quiet on the "racism" of their clique. None seem ready to give up their own position for indigenous or trans critics, who surely exist! Surely they are waiting somewhere for the call from the New York Times that their turn has come, merit be damned!

As the Times‘s own Ross Douthat noted, those who stand to benefit most from this new attitude are the rich and powerful, who will be free to clear the way for their underachieving kids—the Varsity Blues scandal, legitimated by wokeness.

The new war on merit is the same as the old, and it marks regression rather than progress. It's straight out of Lowell's playbook: In the name of "equality," tear down the only system we have that gives the talented a shot over the powerful. 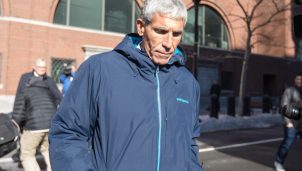