HENRICO COUNTY, Va.—The speed limit sign posted inside the barbed wire fence says 15 miles per hour. If you are driving over unmarked graves it is best to proceed with caution, all the better to avoid the yellow excavator bucket lying idle on the gravel roadway. Tree saplings have been planted the length of the perimeter to eventually obscure from public view hundreds of solar panels that rest on what was once a landscape of misery for boys from Georgia and Pennsylvania. The field, known as Savage's Station, owes its name to the at least 900 Union and Confederate soldiers who killed each other here in Henrico County in 1862. The site is now filled with the ambitions of environmentalists, politicians, and solar energy executives.

Richmond area battlefield tour guide Marc Ramsey was surprised to see the green energy plant as he gave a tour of the field, which was part of the Seven Days Battles area. He said the land now dominated by imposing solar panels used to be full of cabbages.

"Of all places to put a solar farm, right in the middle of hallowed ground of a Civil War battle is such a shame, and now it's lost forever," Ramsey told the Washington Free Beacon. "There are solar panels as far as the eye can see. It's totally industrialized."

Though not against solar energy, Ramsey said it was inappropriate to build a solar plant on land where Americans fought and died. He is a board member of the Richmond Battlefield Association, an organization devoted to buying private land that is unprotected by Virginia's historic registry. The group attempted to purchase Savage's Station, but other projects took precedent. "Lots of regrets now—we should have moved heaven and earth to preserve that land," Ramsey said.

Long-forgotten battlefields have always been vulnerable to the jealous gaze of developers who always see opportunity in seemingly unproductive land. These sites now face a unique threat that comes straight from Richmond—just a few miles down the road from Savage's Station—where Democrats have initiated green energy mandates that make the land particularly attractive. The average solar plant needs about 6,400 acres of land to equal the operating capacity of a natural gas plant. The plant at Savage's Station takes up about 115 acres with a 20 megawatt capacity, which means it is far from the only rural battlefield that solar companies are targeting with the backing of Gov. Ralph Northam (D.). The only people standing in the way are local preservationists who are fighting back to save their county's historic land.

In 2020, Northam signed the Virginia Clean Economy Act, which mandates that the state be carbon-free by 2045. The legislation requires that at least 16,100 megawatts of energy be produced by solar and wind energy. The steep increase—Virginia had only 3,000 megawatts of solar energy "in service or under development" as of 2019—could force the state to cut corners, even with Northam's assurances that the state would preserve historic land in his green initiatives.

The aggressive pursuit of development has rattled local historians. Mary Koik of American Battlefield Trust said that lawmakers must take into consideration that they are treading on unmarked graves.

"In general, you almost always need to assume that there are unmarked graves on Civil War battlefields. There were vast cemeteries because of how field burials were done at the time," Koik told the Free Beacon. "There probably are still remains of American soldiers there."

Solar companies have a number of regulatory hoops to pass through when looking to build plants on historic land. They are required to make a plan to reduce the impact on the affected land and need approval from the Department of Environmental Quality and the Department of Historic Resources (DHR). Urban Grid Solar built the solar farm at Savage's Station before selling it to NextEnergy Capital in 2019. Urban Grid, which declined to comment, attempted to assure regulators that it would preserve the landscape by using a solar racking system. "Significant historic features discovered through a comprehensive archeological study of the site will remain in place and will not be impacted," the company's application said. After being approved by the DHR, the plan went to the Department of Environmental Quality, which issued the final permit.

"DHR is consulted at each step of the process and is afforded an opportunity to comment on the completed application," said Julie Langan, Richmond's DHR director. She acknowledged that the solar plant at Savage's Station was sited on battlefield land and that "two significant archaeological sites are located within the project area" but said the company's "mitigation plan" satisfied the agency.

Edwin "Bull Head" Sumner, who commanded federal troops at Savage's Station, was renowned for his toughness; he had a bullet bounce off his head during the Mexican-American War. The field where his men fought and died has not proved as resilient. Looking across the field of solar panels, it is difficult to see how the topography of a battle that had more than 3,500 casualties has not been significantly altered. Effectively, the plant finishes off the job started by the I-64 and I-295 highway interchange, whose construction decades ago led to the irrevocable loss of other large portions of the battlefield.

Northam, who did not respond to requests for comment, praised the Henrico County project, saying it was essential for the state's move toward green energy.  "The solar industry is one of the fastest growing sectors of our economy and this announcement is a strong testament to the thriving solar energy marketplace in Virginia," Northam said in a 2018 statement. He neglected to mention the Savage's Station battlefield.

The Savage's Station solar farm, which was completed in 2020, served as a wake-up call to local preservation activists. Culpeper County, located outside of Fredericksburg, was one of the most highly contested areas of the Civil War and has become the center of the battle over green energy. Cricket Solar, Maroon Solar, and Greenwood Solar—all of which are headquartered outside of Virginia—have all tried to build solar farms on historic land in Culpeper in the last several years. Each has failed thanks to the efforts of local residents and activists from Citizens for Responsible Solar, which formed in 2018.

The group saved sites such as Morton's Ford and Brandy Station, respectively the largest cavalry clash of the Civil War and the start of the Gettysburg campaign, from development projects. The solar farms, however, were among the most ambitious. Solar companies requested access to 4,500 acres of historic and agricultural land in Culpeper, about two thirds the size of the Gettysburg battlefield. For Clark "Bud" Hall, a historical consultant for the group, the effort to save the battlefields is personal.

"We couldn't save the battlefields of Vietnam where my buddies fought and died," Hall, a Vietnam War veteran, told the Free Beacon. "When I came home it was a natural move for me to get involved in the efforts to save ground where men fought and died because I couldn't do that in Vietnam."

None of the solar companies returned requests for comment.

Critics are worried about the impact of solar plants on agricultural and historic land. "When you're walking on a battlefield in Culpeper, you're also walking on a cemetery. As a people, the American people, we respect our history, and we do not want to see it obliterated by dad-gum solar panels made in China," Hall said.

Green energy companies are still pushing for a foothold in Culpeper and hope to build in the Stevensburg district in part because Dominion Energy's transmission line, which runs through the district, would make the distribution of solar energy easier. Dominion, Virginia's largest power provider, partnered with the Northam administration in 2019 to transition government buildings to green energy. "With this landmark contract, Virginia is leading by example and demonstrating how states can step up to combat climate change and advance a clean energy economy," Northam said.

Susan Ralston owns a 30-acre horse farm in Culpeper and is the head of Citizens for Responsible Solar. She says the community faces pressure not only from powerful utilities and Richmond politicians but also from local governments that stand to profit from mass development. A recent proposal from Maroon Solar would have given the county up to $2 million thanks to recently legalized "siting agreements," which give developers the ability to offer hefty sums of cash to take the control of the land. The county board of supervisors rejected Maroon Solar's proposal in May.

"We have an uphill battle for sure because there are members of the community who want to approve these applications. It's a lot of money for the county. That's the biggest thing, that these solar developers are essentially bribing our county to get these applications approved," Ralston said. "Because of our governor's policies in the renewable energy mandate for Virginia, they are pushing very aggressively, and there's a lot of money at stake."

Culpeper County supervisor Bill Chase (I.) acknowledged the pressure that renewable energy expansion is having on the region.

Instead of pushing solar plants into agricultural and historic land, Ralston says that solar companies should place plants in industrial-zone land, marginally contaminated land, and residential or commercial zones.

"People who love and appreciate the history of the area don't want tons of acres destroyed for power plants," Ralston said. "The fact that it's such a historic area just adds to the reason we should preserve it. People come to Culpeper for its history."

Culpeper earned about $45 million in tourism revenue in 2019, much of it related to the county's rich history. Civil War tourism has always been strong in Virginia, with an estimated 42 million heritage site visitors in 2017.

Other Virginia counties face similar challenges from green energy companies looking to capitalize on Northam's energy priorities. In Pulaski County, residents are working to oppose a solar project on Cloyd's Mountain, the site of an important Union victory. Madison County effectively saved its historic land by banning solar plants from non-industrial zones in a recent ordinance. Gary Gallagher, a retired Civil War history professor at the University of Virginia, has been involved in battlefield preservation for 30 years and has given hundreds of tours on marquee battlefields, including Petersburg, the Wilderness, and Fredericksburg. He said that developers and private companies, as well as lawmakers, may rob future generations of their ability to understand history.

"The pressure [for development] from greater Washington affects all of Northern Virginia, and really affects all the way down into Culpeper. The pressure from greater Richmond impacts the Seven Days Battles as well the 1864 sites," Gallagher said. "You cannot possibly understand what really happened unless you walk the grounds."

There is a knee-high marker in Henrico County, a simple collection of granite just wide enough to hold the cast iron plate bearing the inscription "Savage Station." It is 1 of the 59 battlefield markers that historian Douglas Southall Freeman erected throughout Virginia in the 1920s and '30s. Virginia recognizes the stone pillar, and its two-sentence description of the 1862 battle, as worthy of historic preservation. Fifty yards away stand the barbed wire and the solar panels that now mark the graves of the men who died that day. 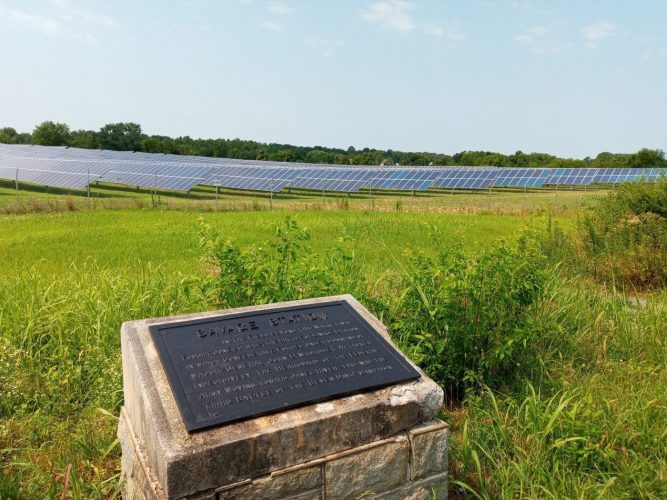