Sisterhood of the Gun

Feature: What I saw at A Girl & A Gun's 2019 national conference

That's the word I kept hearing repeated as women gathered in Texas hill country last week for A Girl & A Gun‘s sold out national conference.

And, after spending a few days among the ladies, it wasn't hard to see why.

About an hour away from the BBQ pits of Austin, among the Bluebonnet-covered rolling hills, where there's a Whataburger in every small town, lies the massive Reveille Peak Ranch. It's there where 450 women congregated to take courses from 60 different professional firearms trainers over the course of 3 days. They came from all across the country and all different backgrounds to improve their shooting.

And they did it together. 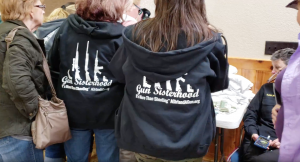 "Oh my gosh. You will never go anywhere in the world other than this event where you will find 400 women and no drama," Gabriella Marra, a club facilitator from Newington, Conn., told me during the event. "They are a drama-free bunch. All they want to do is shoot, be safe, have fun. They are probably the nicest people you'll ever encounter."

The camaraderie and kinship really radiated. Whether it was borrowing ammo to finish a class or some cash for dinner, the women were there for each other. If somebody couldn't get a shooting drill quite right there was guidance from not just the instructors but the other attendees and it was given with a considerate touch.

The atmosphere was inviting—something akin to a church outing. It was refreshing to see firearms training that's as professional as any I've experienced but with a different approach than the adrenaline-soaked, high-pressure atmosphere that certainly can be effective but shouldn't be the only option.

"I think everybody really does a great job of being here for each other," Lynn Dao, a member from Philadelphia, said. "For instance, I left my holster and my girls got me. They already hooked me up with another holster and another firearm to borrow."

That connection, Dao told me, is something she thinks can encourage women like her to embrace their gun rights.

"If you're thinking about getting into firearms, if you're not sure about getting into firearms, just look up A Girl & A Gun. See what they have to offer," she said. "It's a really great resource and it really does promote the best of being a woman and taking control of your safety and your independence. It's been a really monumental part of my life."

The gun rights movement and firearms industry have been saying for years that women are the fastest growing demographic among gun owners and has been making efforts to bring in even more. The National Rifle Association has a program for women's outreach. The National Shooting Sports Foundation, the industry's trade group, has been recommending new approaches to attracting more female customers. However, A Girl & A Gun sets itself apart by being founded by women, run by women, and its events are designed with women in mind.

The 2019 national conference is no exception. For $400, the attendees were treated to three days of non-stop training from competitive shooters, law enforcement officers, military trainers, and medical professionals. And many of the trainers were the top female shooters in the country. From Tracy Barnes, to Tatiana Whitlock, to Gabby Franco, to Dianna Muller, to Vicki Farnam.

Classes were offered for all skill levels but it was apparent to me after a few days of watching and interacting with them that most of the women in attendance were somewhere between intermediate or expert shooters.

That variety of quality courses and the uniquely pleasant atmosphere—one I haven't experienced to the same level at other shooting events—is what seemed to draw women from all over the country.

"For that price, you really cannot find that amount of classes with these caliber of instructors anywhere else," Dao said. "I think that's what sets it apart on top of the sisterhood spirit."

"They're very competent gun handlers and they have an ethic of safety I don't find anywhere else," Austin Davis, who owns the Virtual Tactical Academy, said. "There really isn't a competition here. The only time they look down is to reach down and give somebody a hand up. It is the most supportive environment I've ever been in and I've been a professional speaker for 30 years."

"We threw a lot of different things at these ladies to try and test their skills," Tracy Barnes, Olympic shooter and firearms trainer, said. "The women are great. They're having such a great time. They're very eager to learn. They're just sponges. They're absorbing it all in."

"That's a real refreshing thing, to come to a class where everyone is very eager to either be with you specifically or to learn a specific subject that you're offering," Craig Smith, one of the owners of Immersive Training Solutions, told me. "That's really cool. It's a great environment. It's very electric."

Of course, the professional training wasn't the only thing going on at the conference. There was plenty of pure fun to be had too.

There was a demo day where some of the firearms industry's biggest players like Sig Sauer, Mossberg, Glock, STI, and more let the ladies sample their latest guns and accessories. A full day was dedicated to letting the women interact with the gun companies hoping to win at least a slice of 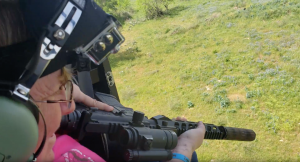 There was also a helicopter with a machinegun. That part was just for fun. And, I can tell you, flying along at tree top level in a Robinson R44 with the doors off and a fully-automatic M4 hanging out the side is *chefs kiss*.

But, as fun as trying out new guns at demo day and zipping around in that helicopter was, when I think about my week in Texas with the women of A Girl & A Gun it's that atmosphere of sisterhood, that camaraderie and kinship which really sticks out most. In a shooting world still dominated by tacticool testosterone junkies—if less so than ever before—we could use more of that.