With an artist as familiar as Rembrandt, it is difficult to make his work appear fresh. It is even more difficult for a curator to avoid overwhelming an exhibition’s guests with example after example of virtuosity. Yet that is precisely what the Morgan Library and Museum in New York has achieved with "Rembrandt’s First Masterpiece," which is on display through September 18.

The "first masterpiece" the title refers to is Judas Returning the Thirty Pieces of Silver. Rembrandt painted it in 1629 at the age of twenty-three, while trying to establish himself in the Dutch city of Leiden. The painting is now in the hands of a private (and anonymous) collector and has never been on public display in the United States. In addition, the Morgan was loaned the three surviving preparatory drawings for the painting from another private collector, reuniting them with the final painting for the first time in nearly four hundred years.

Simply as a matter of technique, the Morgan’s description of the painting as Rembrandt’s "first masterpiece" is apt. While his natural drawing talent is discernible in the illustrations and etchings that survive from his formative years, his early paintings lack both the technical proficiency and pathos that make his later works so moving and characteristic. In short, Judas Returning the Thirty Pieces of Silver is the first of Rembrandt’s paintings that is immediately recognizable as a Rembrandt.

Rembrandt sets the scene indoors and leaves most of the interior dark. This gives his characters a fleeting quality and lends the scene a vitality commensurate with the suddenness of what it portrays. It is a technique that Rembrandt would have seen deployed by Peter Paul Rubens, and that Rembrandt was already able duplicate in his etchings and drawings. But achieving the same effect in painting had eluded him. His earlier efforts failed to render depth and perspective persuasively, a flatness that is exacerbated by the fact that the scenes are too well lit. The shadows are dull and as a consequence, so are the emotions of his characters. 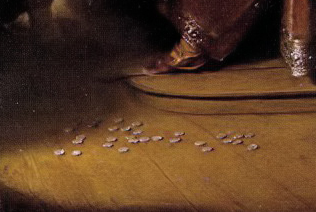 In Judas Returning the Thirty Pieces of Silver, Rembrandt was selective about the sources of light he let enter the room. This simplified the relationships between the foreground and background, lending the whole scene a visual coherence that is often missing from his earlier works. It also allowed him to depict metallic reflections with breathtaking vividness. The relative darkness allows Rembrandt to use an undercoat of white that makes the gold of Torah Shield at the paintings center, the foil woven into the robes of high priests, and most importantly, the thirty pieces of silver Judas has just strewn across the floor shimmer for our attention. Indeed, this aspect of the painting can only be appreciated in person. The brilliance of the metals’ glitter creates a trompe l’oeil that is wholly lost in photographic reproductions.

Perhaps most crucially, Rembrandt was also more selective in what he chose to depict. Preparatory drawings as well as X-rays of the painting reveal Rembrandt’s original inclusion of a curtain, an archway, and two additional characters, all of whom have been painted out of the final work. This simplification of the scene, particularly its reduction of characters, broke with the overcrowding that was characteristic of history paintings from this period. But by "wasting" so much of the expensive wood panel on which he painted with dark washes and shadows, the fleeting glimpses we are given of the characters appear to us with the intimacy of portraiture.

What makes Judas Returning the Thirty Pieces of Silver truly worthy of the Rembrandt "brand," however, is how well this greater technical proficiency serves his distinct narrative genius. Rembrandt’s ostensible focus is the New Testament character of Judas. In the standard telling drawn from the Book of Matthew, Judas is the most zealous of Jesus’ Twelve Apostles. But as zealots often do, Judas becomes disillusioned. He accepts thirty pieces of silver from the high priests of the Second Temple and joins their conspiracy to frame Jesus as a traitor to Rome. Following Jesus’ arrest, Judas regrets the betrayal and returns to the Temple. But the high priests are unmoved by his remorse. Desperate to relieve his guilt, Judas throws the silver back and flees. Left alone and shamed, Judas commits suicide. The high priests, for their part, use the returned silver to purchase a potter’s field in which to bury the abandoned and unloved.

Throughout most of Western history, the portrayal of Judas was not complicated. He is the true villain of the New Testament. In medieval portrayals of the Apostles, Judas is always discernible by his lack of a halo. His robes are often yellow, the color of avarice. He is commonly portrayed with red hair, what Shakespeare called the "dissembling colour," and with the most pronounced Semitic features. Depictions of Judas’ few standalone moments in the New Testament, such as his suicide, are often adorned with satanic figures to leave no doubt in the viewer’s mind about the nature and ultimate fate of the unsaved Jew. 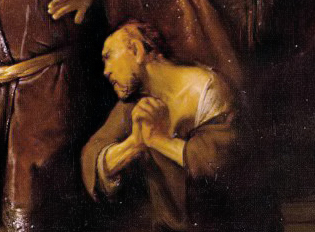 Rembrandt’s portrayal of Judas, by contrast, is so humane as to be subversive. Rembrandt does nothing to feed our hunger for contempt. Instead, Judas is on his knees, hands tightly clasped. His hair, which is brown instead of red, is pulled and tussled. His robe, which is brown instead of yellow, hangs pathetically off his shoulders. Spatterings of red droplets across his face and neck suggest that Judas is in such anguish that he has been sweating blood, as Jesus is said to have done when facing his own death by crucifixion. Judas’ gaze is not on any of the eight high priests, who surround him. It is not toward the heavens. It is trained desperately and hopelessly on the thirty pieces of silver he has strewn across the floor. Judas is not seeking redemption. He is too overcome by the price for which he has sold himself.

This compassionate depiction of Judas is made all the more startling by the portrayal of what surrounds him. As striking as Rembrandt’s rendering of Judas is, he is one of the least distinct figures in the painting. At first glance, the viewer’s eye cannot help but be drawn to the luster of the Torah Shield, which then leads the eye to the only slightly less shimmering robes of the high priests. It takes a moment to notice Judas and his predicament. 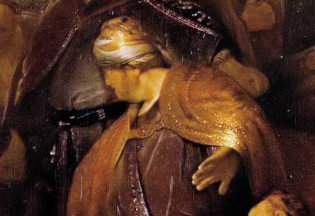 In the preparatory drawings, Judas is sketched into place with a few haphazard lines that make him little more than an unadorned heap. We see Rembrandt perfecting instead the postures of the high priests. In fact, no one in the painting looks at Judas. The fattest and apparently highest of the priests, who wears the most shimmering robes, turns away in disgust, thrusting his hand up in a defensive gesture to shield his eyes from Judas’ face. Another has his hand similarly extended toward the thirty pieces of silver, though it is ambiguous whether he is averting his eyes from them or reaching out for them. Three other figures look at us. Each has a different posture. But their expressions are the same. These three men see us seeing something we should not be seeing. We have stumbled into their conspiracy.

Superficially, the expressions the three priests give us are comforting. They seem to fear our judgment. The contempt we ordinarily heap upon Judas, we can comfortably transfer from the wretch on the floor to these ornately decorated hypocrites.

Yet, their expressions also force us to answer a troubling question. Why precisely is it that we are privy to this scene? We are not viewing this surreptitiously after all. The priests are not surprised that we are there. Our presence is not interrupting what has happened. It is Judas who has burst in and interrupted us. We belong in this gilded room. We may not be one of the high priests, but we are in their company. And our eyes, like theirs, can’t help but prefer the precious metals Rembrandt has so luxuriously rendered than all that is reflected in the dimly lit Judas.

The unflinching humanity of Biblical figures is a motif to which Rembrandt returned throughout his career and which the Morgan deftly displays with a sample of his later drawings and etchings. Rembrandt’s scenes from the Passion, such as the crucifixion, eschew uplifting suggestions of eternal salvation for the agony of a mother watching the execution of her child or the blunt, physical mechanics of detaching a dead body from a cross. Some of his students’ work is also on display, including a sketch of Judas returning the silver, in which Judas is even less central the scene, depicted only from behind as we assess the goings on in the Temple. It is a clear demonstration of Rembrandt’s influence both in its technical approach and its bringing the periphery of a genre’s tropes to the foreground. It is the quintessentially Rembrandt style of painting that uses shadows to reveal something deeper, which the Morgan has delightfully made fresh.