Review: ‘The Art of Return’

Contemporary visual art has a history problem. It often strikes viewers as disconnected from great works of the past or any kind of context, aiming at originality for originality's sake. What does a barrel of glue poured down a muddy hillside or a light bulb frozen in a cube of ink have to do with art? Fortunately for the perplexed viewer, National Gallery curator James Meyer has noticed the problem. His new book The Art of Return: The Sixties & Contemporary Culture offers a thoughtful account of how art and history inform each other, even in postmodern art.

Meyer examines a generation of artists—his own—who use their work to remember the 1960s. They were only children during Camelot and Civil Rights and the Summer of Love, and later felt they'd missed out on a revolutionary time. Like 19th century Romantics born too late for Napoleon becoming obsessed with his memory, these "Sixties children" live with a "gnawing sense of belatedness" driving them "to take charge of the history we did not experience; it goads us to understand what happened—to reconstruct, reimagine, and retell."

Evoking Aristotle, Nietzsche, Walter Benjamin, and sometimes his inner stoned teenager, Meyer catalogues different ways we experience the past. We define our present in terms set by the past; whether through nostalgia for a heroic age, or fear that a dark age could repeat, history finds ways to impose itself. But we also impose ourselves on history. Art in particular lets us retell the past in a way that insists on human agency and declares victory over its tragedies.

The ways we approach the past (or vice versa) are many, and Meyer finds contemporary photographs, paintings, novels, and performances to illustrate them all. The best approach, he argues, is to balance critique and memorial, nostalgia and objectivity. Meyer finds this balance in an extended case study that takes up nearly half his book: Robert Smithson's Partially Buried Woodshed (1970). 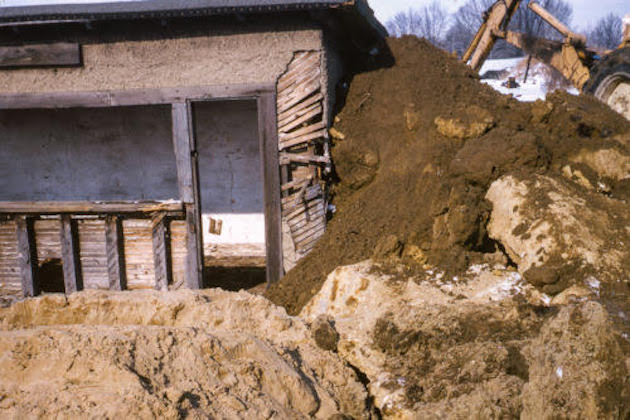 Smithson, a "land artist," wanted to make a piece that would "rid architecture of its monumental pretensions." He found an unused woodshed on the outskirts of a university campus and began piling dirt on it with a backhoe. Twenty loads in, the shed's central beam snapped, damaging the structure irreparably. Smithson's work was complete. He left his old-but-new un-monument to its inevitable collapse.

That university was Kent State, and three months after Woodshed‘s "completion," the campus erupted in antiwar protests that turned into rioting and arson, then ended with four students (only two of them protesters) dead, shot by police. It was one of several breaking points in memory of the Sixties, a real-life version of the woodshed's central beam snapping. The monumental hopes young people attached to protest at the time had broken irreparably.

History turned Woodshed back into a monument. The tragedy Smithson built into his deconstruction emerged fresh for every viewer. Before long, graffiti marked Woodshed with the date of the massacre, renewing its meaning by investing it with the campus's collective memory.

In addition to telling the story of Smithson and Kent State, Meyer exhibits artists who use Woodshed to comment on the '60s as a whole. In a series of works by Sam Durant, Meyer sees a message that the traumatic moments of the 1960s were "not an aberration or betrayal of Sixties values … so much as the entropic fulfillment of the era's exalted expectations." Woodshed teaches that the freedom and enthusiasm of the time are inseparable from later tragedy and disappointment.

Which brings us to why Meyer thinks the '60s remain significant today. The whole decade, he argues, is subject to that paradox of monument and decay. Looking back, the '60s represent "the memory of the fantasy that we can ‘be new,'" a utopianism belonging to an anti-traditionalist tradition stretching back to 1789.

The irony of remembering the '60s today is that the period represented the end of a future, "the last time the modernist dream of radical newness did not seem farfetched." In politics and in art, Sixties radicals aspired to a utopian future free of old ways of thinking and "being." But that future has grown stale—it may never have been fresh. Every revolution for 200 years aspired to escape the past for good, so the "newness" of the '60s wasn't new at the time, and today it's become an inescapable cliché.

The best passages of Art of Return explore this irony, and the worst are those that forget it. When politics comes up, Meyer defaults to uncritical acceptance of '60s causes. He subscribes to a popular narrative that those causes only failed because of right-wing opposition. This is disappointing, given how many of his subjects suggest the shocks of Dealey Plaza and Kent State and Altamont Speedway, not to mention the counterculture's collapse into narcissistic malaise in the '70s, were only the "fulfillment" of entropic forces unleashed by the decade's own avant-garde ethos.

Meyer's view of the '60s is similarly limited in its generational scope. With rare exception, he only discusses artworks from the 1990s and early-to-mid-2000s, all suggesting (at least, in Meyer's reading) the '60s definitively ended and only lives on in memory and art. That understanding of the time may characterize "Sixties children." But there's a younger generation that thinks, for good or for ill, the '60s haven't ended. Resurgent campus protests borrow civil rights rhetoric, while social trends inaugurated in the '60s continue to shape the personal and the political, and tear down everything in between.

Even those trying to emulate '60s politics today would bristle at '60s avant-garde sensibilities. A millennial viewing Smithson enact the aforementioned Glue Pour (1970) would probably be appalled. She might tell Smithson his short-sighted spectacle has lasting environmental effects, invisible to its "groundbreaking" instigators but harming living beings that have to live with the consequences. Millennials less inclined to imitate '60s politics might say the same of the decade as a whole.

Meyer and his contemporaries missed a utopian revolution they can only watch decay. Their recent work may aspire for "newness," but only because they hope to imitate a cherished moment from the past. Every piece insisting the '60s are gone further ensures the decade's continuing cultural presence. You might compare it to, say, a light bulb frozen in a block of ink. The block thaws from heat it could never contain, spilling irreversibly and in slow motion on a gallery floor; its impermanence leaves a permanent mark.

Boobs on the Tube