Review: 'Suicide of the West' by Jonah Goldberg

At the heart of Jonah Goldberg's excellent new book is one simple, startling fact. It looks something like this: 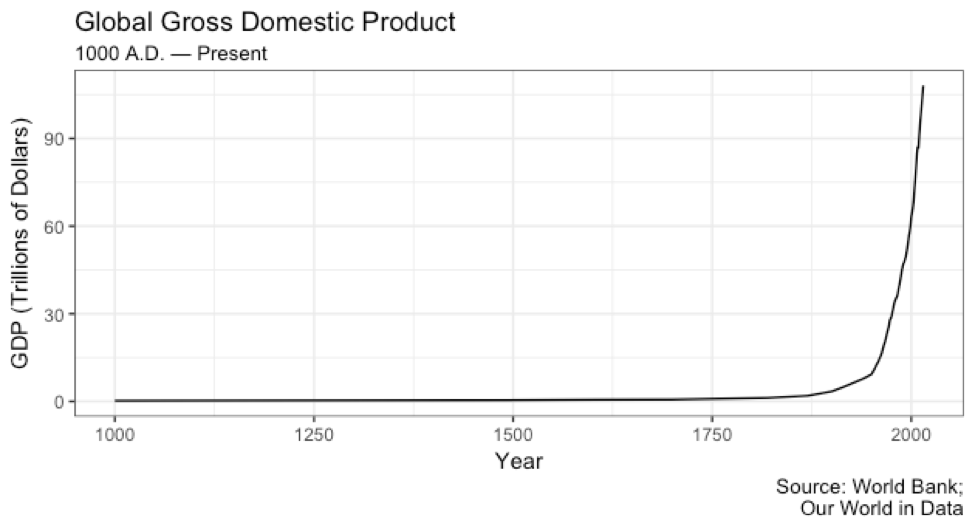 For most of our history, humanity has been impossibly poor. But in the last several hundred years, total human wealth exploded, raising the living standards of the modern average American to levels unthinkable by eleventh-century royalty. The collective rise out of poverty by so many quickly is so astonishing that Goldberg calls it "the Miracle." This is apt inasmuch as to Goldberg the Miracle represents not merely a change in degree, but a change in kind. It is "humanity's quantum leap out of its natural environment of poverty."

Importantly, Goldberg says, the Miracle is "unnatural." It relies upon forms and concepts alien to basic human tendencies. The dichotomy between natural and unnatural does a lot of work in Suicide of the West, and Goldberg spends a whole chapter reviewing both popular and more scholarly works in his account of what human nature exactly is.

Two key terms define Goldberg's anthropology: "tribalism" and "romanticism." Tribalism refers roughly to humans' strong tendency to construct and preference in-groups, as well as our conduct of politics on a face-to-face, "personal" level, and our deep-seated desire for a "big man" or "chieftain" to lead us. Where tribalism is a political stance, romanticism is an epistemic one: a preference for the truth communicated by our feelings and emotions as opposed to reason.

Both tribalism and romanticism are "natural" features of humanity, in Goldberg's account. Consequently, they are implicated in our natural state of poverty, and to exceed poverty is also to exceed them. The exceeding of our nature—and the imposition of an "unnatural" order—begins with what Goldberg calls the "Lockean Revolution," in which philosophers like John Locke universalized the system of English liberties and respect for the individual into the beginnings of a new Enlightenment creed. The rights of Englishmen became the rights of men, with tenets like God-given rights, individual sovereignty, and an absolute right to private property—all of which fly in the face of tribalism and romanticism.

This intellectual revolution took root in America, where the old-world rule of "power, loyalty, reciprocity, alliances, honor and friendship" was replaced by an "extended order of abstract rules and contracts" enshrined in the Constitution. This unnatural order of impersonal rule facilitated by exchange is what today we call liberal democratic capitalism, and it has garnered accolades as the pinnacle of human political design.

Goldberg agrees. "I believe that, conceptually, we have reached the end of history," he writes. "We are at the summit, and at this altitude left and right lose most of their meaning. Because when you are at the top of the mountain, any direction you turn… the result is the same: You must go down, back whence you came."

Indeed, we are in danger of turning back down the mountain. Spawned by a declining appreciation of the Miracle, nature has begun to creep back in everywhere—on the left, in the form of tribal identity politics and romanticist "lived experience" priority, and on the right in the guise of the emotionally volatile form of the "big man," Donald Trump. In satisfying our base nature, humans are endangering the qualitative transformation in our environment that we have wrought over the past three hundred years.

Goldberg's analysis is important and timely, an apologetic for a liberal order under siege. Suicide of the West is an important response to an uncertain moment, and to some degree it, too, at times seems uncertain.

Consider Goldberg's analysis of mediating institutions. He acknowledges: "The old form of civil society… is everywhere retreating, like a once great reef bleached by acidic waters." These institutions are vital to the propagation of the Lockean ideas that undergird the American order—without family, church, school, community, each new generation of children goes untutored in the practice of liberty.

What remains unclear is how these institutions are not basically "tribal" and "romantic." A pluralist society pulls civil society out from under the yoke of the tribe—but isn't familial piety essentially tribalistic? And isn't a preference for one's own country and constitution—essential to producing the kind of patriotism Goldberg wants—basically romantic?

Perhaps the reason so many are ungrateful for the Miracle is because of the hidden costs it has imposed. Discussion of the individual as the fundamental unit of society is inexorably tied up with social atomism. An extreme rationalism erodes the affection that ties together communities. The elevation of wealth as good in itself, unmediated by virtue, cannot help undermine institutions that require self-sacrifice and going without.

This is not to say that the Miracle is bad or must be turned against—only that those who are discontented may have at least the beginnings of a point. After all, miracles are when we get something for nothing, and as all conservatives know, such trades should be faced with suspicion. Is it possible that the cost of all our growth has been the strength of the very institutions needed to sustain it?

To his credit, Goldberg is a far more charitable analyst of current trends than most. Suicide of the West is primarily an apologetic for liberal democratic capitalism, but it is also an astute explanation of how we got to where we are as a nation. It is in this form most valuable, and recommendable on its insight alone.