Review: 'Drawing the Curtain: Maurice Sendak's Designs for Opera and Ballet' at the Morgan Library and Museum

Review: 'Andy Warhol: From A to B and Back Again' at the Whitney Museum of American Art

I recommend buying your tickets to the exhibit in advance: A huge line ran outside the doors and down the street. Whitney employees walked down the line, informing the patrons that there would be "about over an hour wait." Faces fell, but no one left the line. "If you wanted, you could skip the line by purchasing a membership to the museum!" Several people looked at each other, nodded, and scurried to do so. (A year's membership costs $90.)

Andy Warhol (1928-1987), née Andrew Warhola, cryptically said, "I want to be a machine." He certainly churned his work out like one. Born and raised in Pittsburgh by Byzantine Catholic Czechoslovakian immigrants, he left for New York City in 1949 and led a lucrative career in commercial illustration. In the 1960s, he rose to fame for silkscreens and paintings that reflected rampant branding and advertising in America. He was first known for his silkscreen Marilyn Diptych (1962), the Campbell Soup Can series of paintings (1962), and the sculptures Brillo Boxes (1964). When he painted his Green Coke Bottles in 1962, he made a point about class in America: Everyone watches TV and sees Coca Cola—Elizabeth Taylor and the president drank the same Coke as anyone else. "No amount of money can get you a better Coke than the one the bum on the corner is drinking," he said. "All Cokes are the same and all the Cokes are good." Warhol himself soon became as famous as the art he made, and he gathered a widespread circle of friends—or more accurately, followers—who would gather at his silver-walled studio, the Factory.

Warhol's works were commentary on current events in familiar formats (they looked like advertisements or album covers) and bright colors, and the Whitney shows this somewhat haphazardly in its strangely placed rooms. There are the paintings from private collections—widely known but rarely seen—such as Superman (1961) and Dick Tracy (1961). There is the room displaying his Flowers series (1964-5) on walls covered in his Cow Wallpaper (1966), ideal for the Instagram hordes who throng to art museums for the perfect picture.

His famous 1972 portrait of Mao, one in a seemingly endless series, also hangs in the Whitney, and nearby are countless sketches of the Chinese dictator's paunchy face. His Mao portraits, as well as his Hammer and Sickle series (1976) and Skull series (1976), caused many to believe Warhol was a Communist. But Warhol was just reacting to any and all media frenzy. He addressed the AIDS epidemic with his Camouflage Last Supper (1986), sprawling across its humongous canvas. Across this at the Whitney is the Sixty-Three White Mona Lisas (1979), covering an equally giant canvas. Its stark lack of color delivers a welcome sense of calm.

Warhol drew intense criticism. Artists like Robert Rauschenberg and Jasper Johns despised him for still identifying himself as a commercial artist even when some art critics were elevating pop art to the realm as fine art. The critic Robert Hughes lampooned Warhol as essentially a talentless cult leader who only cared about fame. Hughes called his followers "cultural space-debris, drifting fragments from a variety of sixties subcultures." But Warhol is almost worshipped today because he embraced and publicized these same subcultures, including transvestites (especially African-American members of the community, who appear in a series of portraits at the Whitney), gays, rock and roll musicians, and castaways from the most wealthy families. 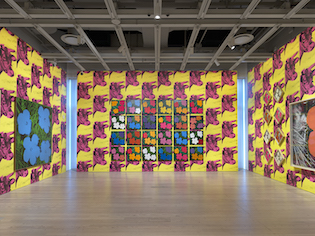 Still, Hughes detected something real: There was a cult-like exclusivity and power that Warhol held over those who clung to him. Perhaps that's why, Hughes suggests, one of them, Valerie Solanas, ended up shooting Warhol in 1968. (Hughes fails to note Solanas was also a paranoid schizophrenic—she did create an organization called the Society for Cutting Up Men.)

Because Warhol became so internationally celebrated at such a young age, it is difficult to believe he cared whether the people who flocked to him were famous or not. Many were not known until he granted them his magical attention. It worked like fairy dust, ensuring a good "15 minutes of fame," a phrase he coined that's as famous as any of his art.

While many thought his work was shallow, he was the first to say so. He admitted to being a "deeply superficial person." You can go a long way being self aware. One begins to suspect Warhol's art was an inside joke with himself. He was reticent and shy, with a wide-eyed look that appeared to convey he was constantly in conversation with himself. He said one of his favorite things to say was, "So what." Therefore, it is not surprising that in his many interviews his composure was often construed as snobbish indifference. In a 1965 interview on the Merv Griffin Show, Warhol and his most famous Superstar, the doomed actress and socialite Edie Sedgwick, shimmered in front of the cameras.

Warhol flicked a half smile. "No," he murmured.

"None at all?" a stunned Griffin said.

"What kind of emotion can you put into a Campbell Soup can?" Sedgwick said, with a raspy laugh.

Warhol's avant-garde films, on the other hand, appeared to be a serious endeavor for him. A small theater in the Whitney is playing his screen tests of the starlets who came to the Factory. They have a haunting effect. People in the '60s, of course, would not see Sedgwick's face as we do today, given what we now know about her tortured life. The passage of time may furnish the most compelling aspect of Warhol's work.

In the end, the wide-eyed, blonde, gay man left his mark on American history while telling us little about his own life, beyond a tireless appetite and the company of celebrities. He spawned the Velvet Underground; socialized with transvestites, junkies, and the upper echelons of wealthy society; and painted or printed or photographed or filmed seven days a week. His ambitions and energy were endless. You may come to the Whitney to mock or to revel. Either way it doesn't matter. Warhol is Warhol. As he would say himself, "So what."

Review: 'Drawing the Curtain: Maurice Sendak's Designs for Opera and Ballet' at the Morgan Library and Museum