The Most Realistic Gun Training Possible

Imagine coming home from the grocery store. You open the door to your house and find a strange man standing in your living room.

He's got a shotgun.

You can hear the sound of the blast, feel its concussion.

You continue to shoot. He falls to the ground. He isn't out of the fight yet, though. The slide on your gun is locked back, the magazine is empty. You drop to your knee, get off the spot you last fired from, drop your empty magazine, grab a fresh one from your pocket, and reload.

As the intruder writhes on the ground he tries to raise his gun back up at you. You fire another three rounds at him. He stops moving. The fight is over.

You realize you're okay. You're not shot.

But, then, of course you're okay. You were never actually in any real danger. Despite what your eyes and ears may have told you, you weren't actually being shot at, and you didn’t actually shoot anybody. Not really.

Sure, the guns were real. The ammunition was live. You really pulled the trigger and so did the other guy. It looked like you were shooting at each other. It sounded like it too.

But you were actually shooting at a high-tech mirror film designed to absorb bullets and angled toward an area next to you. Your shots landed harmlessly in a rubber backstop behind that mirror. It’s all part of a new training program run by a company called Troysgate.

The set up is something akin to a magic show. You know, smoke and mirrors. Only, instead of smoke, it's gunpowder.

And it works. It works really well.

The whole experience, even when you know how it works going in, is remarkably realistic. It feels like you're really shooting at somebody, and they're really shooting back at you. It's extremely stressful, and it’s great training.

Randy Martin developed the mirror film and shoot house to bring more realism to firearms training after spending decades in law enforcement and surviving a deadly force encounter. Traditional training with paper targets can give you experience with shooting real guns and live ammo, video-based training can present you with different scenarios where you "shoot" at pre-recorded and semi-reactive video of real people, and training with simunition can give you experience with shooting fake guns at real people while they shoot back at you. Troysgate can give you the best features of all those training techniques at once. 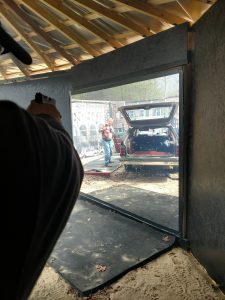 It's incredibly versatile as well. Since the mirror film is thin and flexible, it can be easily set up in any number of configurations for any number of training purposes. While I was at Troysgate's Lenoir, North Carolina, facility I shot through a living room set, a simple hallway, a parking lot set with a real car, and a guard posting along a road.

I shot through scenarios with home intruders, kidnappers, and long-distance threats. My heart was racing even before I began my first shoot. It didn't get any less stressful throughout the day. One of the hardest parts was pulling the trigger on a rifle after centering my sights on the face of an actual person. While I knew, intellectually, it was a mirror I was actually aimed at, my eyes couldn't tell the difference.

For some, it's too hard. Too realistic. Martin and his staff showed me some videos of people breaking down during the training. If somebody has experienced an actual deadly encounter and had to shoot someone, the realism of the situation can get to them. Yet this can be helpful: Martin says that the training can help them work through the mental and emotional issues that arise from shooting someone. 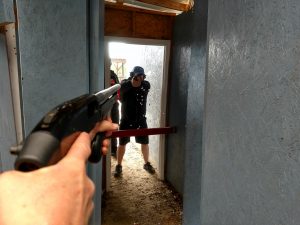 The main purpose is to train people for situations they may encounter either in civilian life, in law enforcement, or in military engagements. That's where the versatility of Troysgate really comes to play. They've put all sorts of people at every level of each group through the system. They've built specialty shoot houses at two locations in North Carolina that are open to the public (a full day of training can be had for $250, which is a steal if you ask me). They've also designed mobile shoot houses constructed from shipping containers that the military has taken a strong interest in. But the concept and technology work with more than just small arms—it also works with tank rounds.

The stress induced by firing real guns at real people while they shoot right back at you is, well, real. That stress reveals problems that you may not detect in other training contexts—for my part, I had consistent problems with retrieving my spare magazine during reloads. I couldn't recommend Troysgate more for exposing those flaws that other less stressful, less realistic training may not.