Dolezal has been doing a series of media interviews to promote her new book, In Full Color. While shows like NBC's "Today" and publications like "The Guardian" have interviewed her, the Times is easily the most prestigious outlet to grant her a platform.

The Times tweeted out a link to the Facebook livestream, which began a wave of snarking commentary.

@nytimes why are you even giving her a platform! Seriously.

you can also………not….do a Facebook live interview with Rachel Dolezal pic.twitter.com/FhNLXA9Ktr

Me: You know, maybe the New York Times learned its lesson from the electi–

The video was flooded with "angry faces," the Facebook option for expressing dislike. Times readers did not hold back in the comments, either.

"There are literally thousands of people who are doing good work and could use this platform and NY Times decides to interview Dolezal? Come on," reads the most-liked comment on the Facebook post.

"If black men start identifying as white then they will stop getting shot by police right? No, so transracial is something only white people can do… that is the privilege," argued the second most-liked.

Other responses were less serious. "I identify as an AH64 Apache attack helicopter, you must all recognize my rights to launch Hellfire missiles and reign terror [sic] from the skies or you are a heliophobe," joked one.

Dolezal received controversial fame in 2015 when she was forced to resign from her NAACP position and was fired from her adjunct teaching gig in the African-American Studies department at East Washington University when it was discovered that she was a white woman posing as an African-American.

In February, the Washington Free Beacon reported that Dolezal was holding to her assertion that she is not white, but could not find a job, was on food stamps and preparing to be homeless.

Now, Dolezal is attempting to raise awareness for those who are "trans-racial."

"I do think a more complex label would be helpful, but we don’t really have that vocabulary. I feel like the idea of being trans-black would be much more accurate than ‘I’m white’. Because you know, I’m not white," she told The Guardian in February. 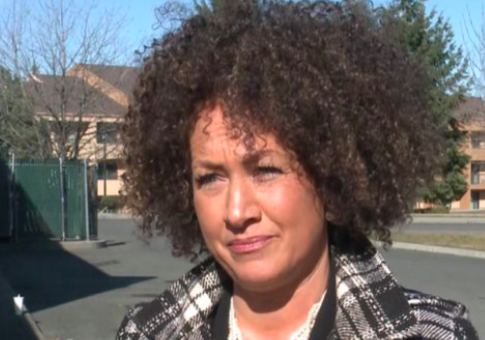