I was sitting in the basement of a Hampton Inn in Winchester, Virginia, when I first realized I was in over my head. As I sat wondering about the basic rules for each of the twelve different stages of the National Rifle Association's World Shooting Championship (WSC) that I and the 225 or so people around me would be competing in over the next three days, the people who do this for a living peppered the organizers with detailed questions about the minutiae of how each stage is scored.

As an amateur competing for the first time I was mostly just looking forward to the experience. It never crossed my mind that others might be thinking, ‘Hey, I really want to win that $25,000.' I suppose that's because the possibility of winning any of the cash prizes never crossed my mind at all.

Apparently my lack of confidence was justified since I finished 72nd… of 87… in the amateur division.

The WSC takes place at the Peacemaker National Training Center in Gerrardstown, West Virginia, about an hour and a half west of the DC beltway. It is unique among shooting competitions: Instead of having everybody bring their own guns and ammo, these things are provided by the organizers. That creates the closest you can get to a level playing field.

The NRA and Peacemaker label the WSC as the pinnacle of competitive shooting. A number of the organizers I talked to compared it to the World Series or the Super Bowl. Certainly all of the shooters I've heard of, such as Jerry Miculek and Daniel Horner, were there. The biggest names all placed near the top with Bruce Piatt winning the top prize, Horner coming in second, and Miculek in fourth. (Though I did hear that some pros didn't make the trip to Peacemaker due to sponsorship conflicts.)

So inasmuch as there is such a thing as the "World Series of shooting," this is probably it. After all it takes the top shooters from every different shooting discipline, and there are a lot of disciplines, strips them of their specialty gear, and makes them compete in all of the shooting disciplines at once. The most consistent shooter across all the stages wins: indeed, Paitt won the overall competition despite only winning one stage outright.

But here’s the thing: Unlike the World Series or Super Bowl or Stanley Cup or whatever, for a few hundred bucks you can actually compete right alongside the best in the world at their biggest event.

The scoring is broken up so if you enter as an amateur, technically you aren't directly competing against the pros. However, the scores are all online and you can compare how you did to how everybody else fared in each stage. My results were very revealing and, well, odd. 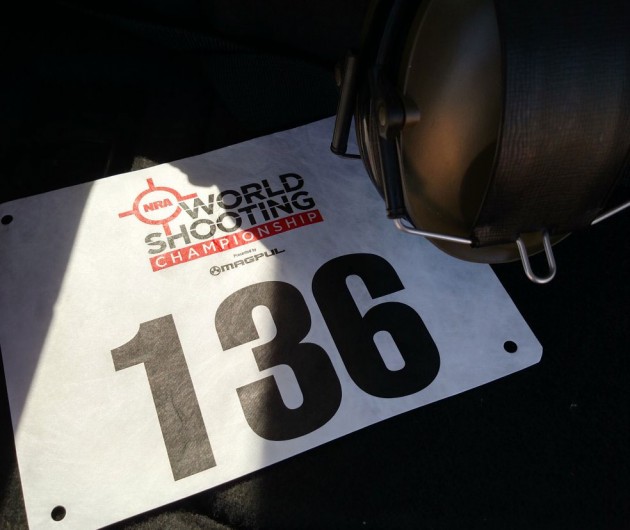 Turns out I'm a great sniper.

Or, well, at least the PRS Long Range Challenge was by far my best event. That features shooters firing at five targets placed 800 yards down range with a Surgeon Scalpel McMillan A5 Adjustable .308 Rifle equipped with a NightForce ATAC F1 5-25 firing Berger's ABM Ammo. It's a set up that's amazing to shoot, and also tens of thousands of dollars outside of my real-life budget.

I ended up placing 118th out of all 218 competitors, including the pros, in that stage. (Okay, so maybe "great sniper" is an exaggeration.) My relatively strong finish is odd since I've only ever fired serious long range bolt action rifles once before in my life and that was in the middle of the desert while I was surrounded by machine guns. That was, of course, a lot of fun but it wasn't exactly a competition setting.

Additionally, I have lots of experience with skeet shooting and range shooting with a 1911. I own two shotguns and two 1911s. There were several stages that used those firearms, albeit much, much higher-end versions than the ones I own, and I didn't do nearly as well with them.

I definitely don't own a Surgeon Scalpel, or anything comparable, but I was able to do well with it. And that's even though I only actually hit two of the five targets. You see, each miss counts as a penalty and adds seconds to your time. But, if you shoot the course fast enough, you can make up for your misses and still beat somebody who actually hit more targets than you but went slower.

That was the biggest difference I noticed between how I tried to shoot each match and how the pros did it. Since each miss can be counted differently the people who really understand the rules best end up beating those who don't grasp the intricacies involved.

My focus in most matches was on clearing the whole stage without missing a target. I never was able to accomplish this, though I was only one miss away in the Cowboy Action stage (yee ha!), but it's clearly not the main focus of the pros. Instead, they're focused on making the best time in addition to shooting as well as possible.

That's why they were incredibly concerned about the minutiae of scoring each stage. They use that information to plan each shot and each step they're going to take. Knowing how to approach a match properly is nearly as important as shooting accurately. The best were able to do both and that's why they came away with tens of thousands in prize money and free guns.

Allowing for gamesmanship like this can have unintended consequences, as became apparent during the "2 Gun stage," much to the organizers dismay. It turns out that there was no time penalty for not shooting at the far steel targets, so some of the pros figured out they could actually score better by dumping their final shots into the ground rather than take the time to engage those targets. The competition actually ended up scratching the stage from the overall scoring.

The pro's prize table, which featured all of the guns used at the match and allowed competitors to take one in the order they finished, was naturally way better than the amateur table: but the options there weren't too bad. Even though I finished near the bottom I still came away with $75-$100 worth of Magpul accessories. Plus there were exhibitors set up from a number of gun companies throughout the event that gave away free stuff such as the upgraded Ruger AR-15 and 10/22 triggers I received.

That stuff alone probably gets me near or over the $350 registration fee, but the real value was in shooting all of those incredible guns. There's simply no other way to work out that kind of hardware.

And that doesn't even count the experience you gain from shooting with the best of the best. Nathan Watters, who placed 11th overall in the pro division, was actually in my shooting team. He was a very unassuming and humble guy and I had just assumed he was an incredibly good amateur shooter who should be competing as a pro. He was very open to sharing tips and strategies for each stage and it's difficult to put a price on the kind of knowledge you can gain from somebody like him.