Filling the hole in your soul

This review discusses plot points from First Reformed, including a brief mention of the film's final scenes.

The plot of First Reformed is relatively straightforward. Reverend Toller (Ethan Hawke), an ill preacher who finds himself unable to communicate with God following the death of his son and the dissolution of his marriage, attempts to help radical environmentalist Michael (Phillip Ettinger) find a reason to celebrate bringing a child into the world following the revelation that his girlfriend, Mary (Amanda Seyfried), is pregnant. Michael's extremism rubs off on Toller, who begins to wonder if God can forgive us for the harm we've done to the planet—or our inaction in the face of said despoliation.

Paul Schrader's direction is simple, yet exacting. Framed in a boxier 1.37:1 aspect ratio and focused on facial reactions in a way that calls to mind the work of early filmmakers such as Dreyer and Bresson, every moment of First Reformed feels perfectly framed and precisely lit, every shot designed to convey the film's ideas and concerns.

Following—intermixed with, almost—the opening credits, the initial thing we see in First Reformed is a crucifix atop a church, dimly lit. So dimly, in fact, that it seems at first to be a ghost image, an after-effect burned onto the screen from a previous showing, perhaps. An optical illusion, maybe. As the light increases, the church comes into focus and the cross grows brighter. But this is a faith that has dimmed.

Following Rev. Toller's conversion to Michael's cause—during his conspiratorial lecture, Michael is surrounded by hockey stick charts and computer graphs showing the warming of the planet; his ravings are replete with wide-eyed warnings of starvation and floods and plagues and locusts—we see the church again, at night. But this time it is lit in a way that obscures the steeple and the cross atop it. Rev. Toller may continue to speak of God, but he has been converted from Christianity to environmental evangelism.

Variety‘s Owen Gleiberman suggested that Schrader's use of environmentalism in First Reformed is a bit of radical chic, a progressive sentiment designed to earn sympathy and plaudits from like-minded critics. The term may have been on his mind because of Tom Wolfe's passing, but it doesn't really fit. As Joseph Epstein noted after Wolfe's death, the phrase "was a perfect description of the behavior of an upper class with nothing at risk cultivating fashionable progressive opinions to reinforce its own self-esteem. … The point about the phenomenon was that it was risk-free."

If anything, First Reformed strikes me as a stinging condemnation of radical environmentalism, a warning against the dangers of replacing the light of the church with the darkness of an apocalyptic cult. It shows such beliefs as anything but risk-free: By the film's end, Rev. Toller is strapping on a suicide vest and planning to blow up not only his church but also its congregants (including a wealthy industrialist who has funded the restoration of the church).

That Toller turns from this path at the last moment, choosing love over hateful hopelessness, and that Schrader drives home the wisdom of that turn by adopting a shocking stylistic adjustment—shifting from staid compositions to wild, joyous movement right before the credits roll—for the film's final shot, only reinforces the suggestion that First Reformed is in fact deeply critical of radical despair. 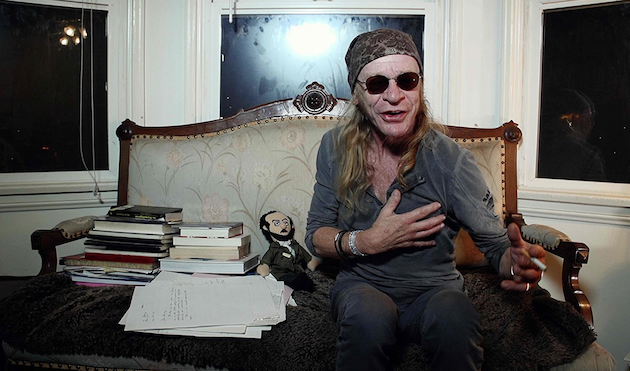 Filmworker is about another man who gives himself over to a cause. This one, however, is quite non-fictional: Leon Vitali, one of the stars of Barry Lyndon, served as Stanley Kubrick's amanuensis from the time he worked on The Shining until the great director's death in 1999 and beyond, attempting to guarantee that Eyes Wide Shut‘s release was as close to Kubrick's vision as possible and obsessively working on DVD re-releases to ensure that the discs resembled how Kubrick wanted the films to look.

Vitali is interviewed along with executives and filmmakers and actors who knew or worked with or simply admired Kubrick. These conversations are spliced between footage from Kubrick's films and from Vitali's non-Kubrick performances. An up-and-coming British actor who Filmworker leads us to believe was popular with both the serious set (he is a classically trained Shakespearean actor) and the Tiger Beat crew (he sports a mop top and a come-hither grin for photo spreads in teen mags), Vitali gave up acting to become Kubrick's full-time assistant.

But "assistant" doesn't really give the full sense of his job. Vitali's duties went far beyond simply making calls and taking notes. He is the one who found Kubrick's Danny Torrance (Danny Lloyd, making a relatively rare media appearance here). He helped drill R. Lee Ermey on dialogue and acting technique, help that Ermey (RIP) says created his whole career. He played multiple roles in Eyes Wide Shut when he wasn't running around the set trying to find whatever little thing Kubrick needed at that moment. He would do battle with studios and pore over prints, ensuring that the famously fastidious director's wishes were respected.

Filmworker seems to have a more jaundiced view of Kubrick than Vitali does. The wispy haired, bespectacled genius is often seen flitting around in the background, silently watching the proceedings unfold, looking on as talking head after talking head suggests that Kubrick took advantage of Vitali, that Vitali gave too much of himself, that being on call 24/7/365 for a stickler like Kubrick may have ended up shortening Vitali's life by a few years (or decades).

"I love Leon, but he makes me sad," we hear Matthew Modine say in a voiceover that, I believe, was taken from the audiobook of Modine's Full Metal Jacket Diary. And there's certainly sadness to Vitali, a sense that he was subsumed by Stanley's obsessiveness. This comes through Filmworker in odd ways. I was a bit shocked to discover that Vitali has multiple kids about two-thirds of the way through the film. We'd seen nothing of his personal life up to that point. And then, all of a sudden, here are his fully-grown offspring talking about the ways in which he wasn't always entirely present. I had just kind of envisioned Vitali as a monk living on the Kubrick estate; the idea of an independent identity simply never entered into the equation. It's a weirdly effective bit of filmmaking: we don't even know there's a blind spot in his life until it is revealed to us.

It's obvious that the film worker himself doesn't mind. His love for Kubrick is clear, his admiration for the genius undented. But, like Modine, I too feel a little sad for Leon.

Could We Have Done More?