Review: 'Treasures from the Nationalmuseum of Sweden: The Collections of Count Tessin' at the Morgan Library and Museum in New York City through May 14

As someone who once went out after dinner as a graduate student and spent my last remaining dollars on a used book, figuring that I could squeeze an advance on my next stipend disbursement out of the college dean the next morning, I get what Count Carl Gustaf Tessin was about. Tessin was a Swedish politician, man of letters, memoirist, and art lover who, following the success of his party in 1738, accepted an appointment as an ambassador to the court of Louis XV. Once in Paris, he embarked on a glorious binge of collection, commissioning, and buying vast numbers of paintings and prints.

Upon returning home a few years later, he was bankrupt, but the college deans of his story—King Frederick I and Crown Prince Adolf Frederick—swooped in for the save, buying up most of Tessin's collection and keeping his family off the streets. Today, the works form the core of the Stockholm Nationalmuseum's holdings. This is the sort of commitment that marks a true collector. Anything less is amateur hour. (If some small new country like South Sudan needs books to form the basis of its own national library, I am available to talk.) 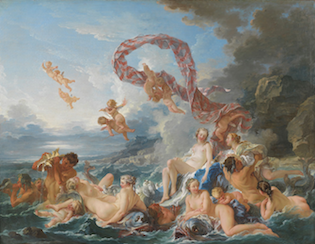 ‘The Triumph of Venus' by François Boucher

The Nationalmuseum is closed for renovations this year, and the heart of Tessin's contribution is currently on tour at the Morgan in New York. Now, I yield to no one in my admiration for Tessin's recklessness in the assembly of this collection. His taste, however, is another matter.

The one thing that can be said in his defense is that we are all creatures of our epoch, and his did him no favors. The high French Rococo style of most of the paintings in the exhibition is, for lack of a better word, gross. It is also cloying, twee, nostalgic, gauzy, self-conscious, kiss-ass, artificial, decorative, frothy, and sentimental. If Nicholas Sparks were a period of art history, he would be the Rococo. If the Rococo's furniture and knick-knacks were on offer at a Baghdad yard sale in the 80's, browsing members of the Ba'ath party elite would turn up their mustachioed noses at the schmaltz displayed before them. The careers of Boucher and Fragonard were on their own sufficient justification for the French Revolution. Inequality and political repression just rounded out the case. 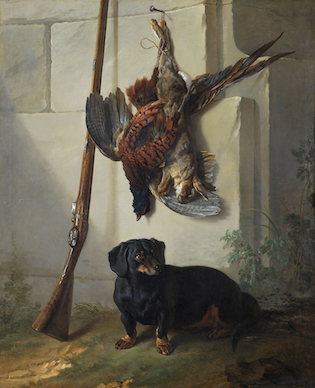 Take this, then, as my collective commentary on the portion of this exhibition devoted to paintings, including (and especially) the jewel in Tessin's crown, Boucher's ‘Triumph of Venus.' Even the works on hand of Chardin, whose occasional restraint might otherwise earn him a pass, have such limited emotional depth that they make the illustrations on a Hallmark card look like Michelangelo's ‘Last Judgment.' Practically the only painting that succeeds does so because its aim is so modest: the portrait of Tessin's dog that was commissioned from Jean-Baptiste Oudry. That is one good-looking, albeit chesty, dachshund.

Far, far superior are the old master drawings Tessin collected in Paris. He obtained the bulk of those on exhibition at a fire sale of works owned by a banker named Pierre Crozat. (Buying at a discount is not an admirable trait in dedicated collectors, who ought to avoid any hint of prudence. Tessin, being Tessin, managed to escape doubts about his seriousness by taking one look at the auction's bargain prices and walking away with 2,057 drawings.) Represented here are Dürer, Raphael, Ghirlandaio, Poussin, Rembrandt, van Dyck, and more. The gallery is a marvelous, miniature history of art from the high classicism of the Renaissance to the Baroque. 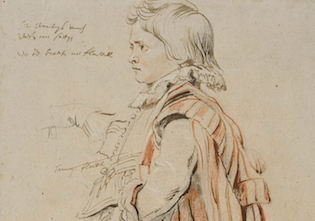 For those used to seeing the work of the greats only on large canvases or through photographs of frescos, it will be remarkable to see the range of expression and emotional force they could achieve with the use of only ink and paper. The drawings range from what appear to be quick sketches to more fully developed works. But even when the subject matter is unremarkable and the investment of the artist's time relatively brief—a few modest homes in Rembrandt's ‘Three Thatched Cottages by a Road,' or a quick study by the same artist of a seated woman, ‘Study for the Figure of Esther in The Great Jewish Bride'—the impression of reality, conveyed with line and little else, is striking.