The builders of the Tower of Babel were determined to make a name for themselves, and so they built a structure that rivaled the heavens. Their tower was not made from stone or wood or any other natural material but from bricks, which man created from dirt. Mastering nature fed the builders’ ego and they became self-obsessed, thinking themselves gods. But when God came down to see this city of man he was appalled by the builders’ arrogance. He scattered them across the earth and disrupted their unity.

So it was—or, for graphic designer Peter Chadwick, the author of a glossy coffee table book titled This Brutal World, so it is—with the Brutalists, a group of architects who created "vast concrete constructions … on a large scale."

The book is rather like a 200-page cement slab. It contains photographs of Brutalist structures by lesser-known and famous architects from 60 countries, ranging from the 1950s to today. The photos are all in black and white because Brutalism rejects color and focuses instead on material, shadow, and shape. But even without the leveling effect of monochrome, the buildings look uniform due to Brutalism’s "international reach." Chadwick does not take issue with the loss of national style and character that accompanies such a universalizing movement. His photographs are punctuated with quotes written in a block-style, beveled font from figures like Ayn Rand and George Orwell, along with British writer Owen Hatherley, who has written at length about the virtues of communist architecture. 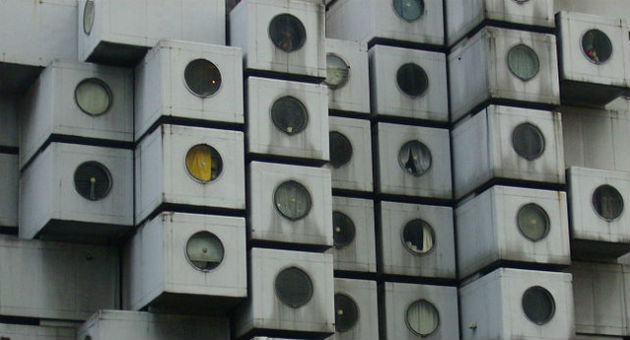 Chadwick prefaces his photos, without apparent irony, with Orwell’s description of the Ministry of Truth from his dystopian novel 1984: "an enormous pyramidal structure of glittering white concrete, soaring up terrace after terrace, three hundred meters into the air. A thousand rocket bombs would not batter it down." Orwell’s propaganda factory, much like the tower of Babel, is resilient, "muscular," and built to last—features that Chadwick relishes.

It is hard to believe that one could enjoy Orwell’s description of the Ministry of Truth without enjoying what it represents. But Chadwick shrugs off Brutalism’s "political origins and social ambitions" in his introduction, telling the reader, "the aesthetic power of Brutalist architecture is undeniable. 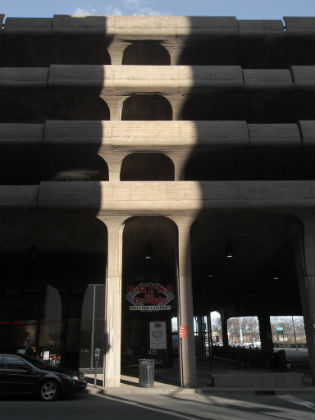 Alongside such eerie and disturbing quotes, Chadwick includes photos of parking garages (the only place where Brutalism might actually make sense), libraries (which do not look cozy), cemeteries, homes, and monuments. Oddly, he also includes quite a few churches. The Holy Redeemer Church in Tenerife, Spain, for example, consists of tilted, spaced out, rough concrete slabs that combine to form an enclosure. One of the slabs has an abstract cross carved into it—the only feature that identifies the structure as a church. The stark space is meant to inspire a "sense of tranquility."

But he also includes the Brother Claus Chapel in Mechernich, Germany, built in 2007. It looks taller than the Spanish church and stretches minimally toward the heavens. The building is carved from what looks like a single piece of concrete, adorned with a bunch of holes, and sports a triangular doorway with an itty bitty carved cross above it. Though it looks uncomfortable and ugly from the outside, it isn’t half bad with some context (not provided by the author).

The chapel is devoted to the patron saint of Switzerland, Brother Claus, who lived, let’s say, an ascetic life—eating only the Eucharist for 19 years. It has a wigwam-style ceiling that is a mosaic of local pinewood (such a regrettable aesthetic compromise is, naturally, not pictured) and was constructed by a local community group. The pine strips open to an oculus (an architectural feature at least as old as Rome), meant to simulate a vision that Claus had of floating in his mother’s womb. What is not shown in Chadwick’s photo is what makes the Brother Claus chapel intriguing and meaningful. Without this context, those who do not share an affinity for plain concrete buildings might not enjoy looking through 200 pages of them. 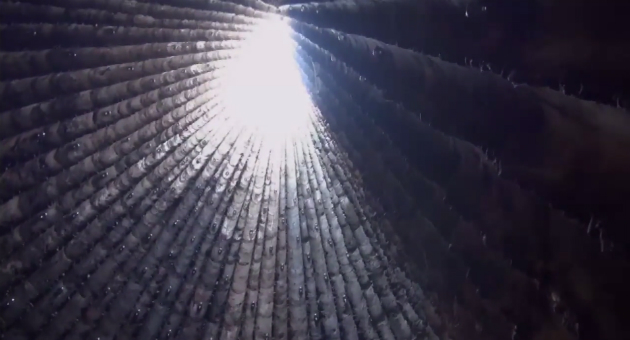 Oculus of the Brother Klaus Chapel in Mechernich, Germany / Screenshot from Vimeo

I have always been confused as to how it happened that people came to accept—let alone like—the buildings that Chadwick gushes over. For context, which he does not generally provide, I looked to Tom Wolfe’s 1981 book, From Bauhaus to Our House.

In the early twentieth century, Wolfe explains, a group of architects associated with several movements in Europe set out to make a name for themselves, rejecting the norms of classical building design as bourgeois. No ornate facades. No pillars. To effect their overthrow, they founded compounds with sacred manifestos and made architecture more about theory than the physical act of building. Architects like "Marcel Breuer, Le Corbusier, Louis Kahn, and Paul Rudolph" (Chadwick’s avowed favorites) became idols ("white gods," wrote Wolfe), even though they rarely built anything. Of Le Corbusier, Wolfe wrote, "he built a Radiant City inside his skull."

Bauhaus (and later, Brutalist) buildings were supposed to be "functional." They were made from mass-produced materials like concrete and sported flat roofs, even though neither of these features could withstand natural forces—concrete wears over time and flat roofs collapse under the weight of rain and snow. But to hell with traditional knowledge, these architects said. Pointed roofs hadn’t stuck around so long for any particular reason, anyway. They were an expression of oppression. Bauhaus buildings were supposed to "re-creat[e] the world" and shape the souls of those who lived in them. That could never be done with traditional modes.

When workers who had to live in these buildings protested, Corbusier said that they had to be "‘reeducated,’ to comprehend [their] beauty." ‘Corbu’ and his kinsmen would watch over the homes they built, returning again and again to take down any homey touches their ‘clients’ might add. The clients had little choice but to obey.

During World War II, many of these architects were forced to America. Gluttonous, bourgeois, consumerist America, where the client had traditionally dictated what he wanted his building to look like. No more. With the arrival of Le Corbusier and others, the idea of an American architectural style that represented the American character grew much less likely, strangled as it was by the tyrannical, "godly" architect.

Corbusier’s worker-centric housing ethos didn’t make much sense in America without the totalitarian context, but it didn’t much matter. What were modernist buildings, anyway, if not "self-worship" like the Tower of Babel? Corbu and his ilk found new homes for their pillboxes like Yale, Chicago, and Harvard, where students displayed a sort of religious fervor for such esoteric constructions.
And so, rather than producing worker housing, Bauhaus and the related modernist movement Brutalism ended up producing furniture for the wealthy as well as ugly, unlivable buildings. People and organizations all across America, all over the world, fell for it and followed the white gods, despite their aesthetic reservations. As Wolfe writes, they took it like men. So does Chadwick.