A University of California-Berkeley professor and leading force in the Palestinian activism movement apologized Tuesday for sharing pictures on social media that depicted Orthodox Jews as murderous and suggested a moral equivalency between North Korea and Israel, but stood by his work focused on "opposition to Zionism."

Hatem Bazian, a lecturer in the Berkeley department of ethnic studies, has said he recognized the "offensive" nature of a post he retweeted, which included a doctored image of North Korean leader Kim Jong-un wearing a kippah, or Jewish skullcap, standing below the caption, "I just converted all of North Korea to Judaism."

"Now my nukes are legal & I can annex South Korea & you need to start paying me $34 billion a year in welfare," the caption continues, directed at President Donald Trump, suggesting that if North Korea were only Jewish, it might expect to share a similar relationship with the United States as Israel.

The image also bears the phrases "God chose me" and "101 Judaism we teach it" written over images of nuclear weapons.

In the second image Bazian retweeted, the hashtag "#Ashke-Nazi" was applied to the image of a man in mock-Hasidic garb, including a traditional black hat and side curls. The caption reads, "Mom, Look! I is chosen! I can now kill, rape, smuggle organs & steal the land of Palestinians YAY."

Bazian said that he retweeted the post while traveling to teach a course in Spain and France, "and did not read the message or image carefully on my phone."

"I did not realize or read the full text until it start appearing on my Twitter feed again from a number of pro-Israel groups that target Palestinians," he said. "As a matter of policy, I don't respond to any of it as I focus on my work and have few people that manage my social media and Facebook."

Bazian said he "was focused on the North Korean debate rather than anything else [in the post]."

"The image in the tweet and the framing relative to Judaism and conversion was wrong and offensive and not something that reflects my position, be it in the past or the present," he said.

Bazian added that he has worked against "anti-Semitism in partnership with progressive Jewish groups that express solidarity with Palestine's rights to self-determination."

The tweet originally came from a user named "Ron Hughes," who used the images to explain blocking the account of a Parisian kosher restaurant, Le Kazbar. 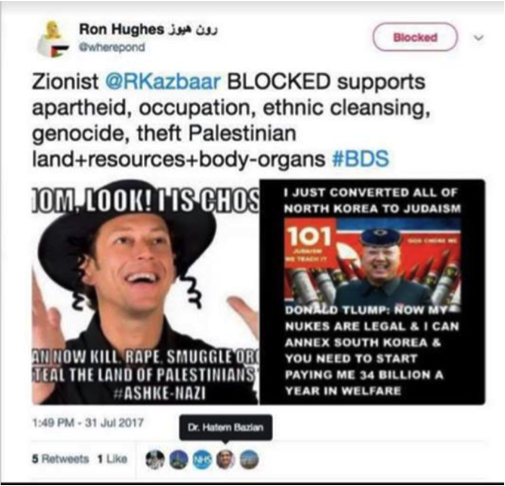 On Monday, a student club named Tikvah: The Zionist Voice at UC Berkeley publicized the retweet, and called for Berkeley to "hold him accountable for his Anti-Semitic behavior."

"It is unacceptable for a lecturer at a highly acclaimed and diverse university to be allowed to spew propaganda and discriminatory content, whether it is in the classroom or online," the group wrote on Facebook.

Berkeley spokesperson Dan Mogulof said the university "unequivocally supports the University of California Regents' ‘Principles Against Intolerance,’ which are clear in their general condemnation of bias, hatred, prejudice and discrimination. We also adhere to and strongly support their specific statement that, ‘Anti-Semitism and other forms of discrimination have no place in the University.'"

"While we do not believe that all criticism of Israel's governmental policies is inherently anti-Semitic, the social media posts in question clearly crossed the line, and we are pleased they have been deleted," said Mogulof. "We deeply regret the impact these posts have had on members of our campus community and the public at large. UC Berkeley is and will remain committed to fostering and sustaining a campus community, and a world, where everyone feels safe, welcome and respected."

Bazian is founder and chairman of American Muslims for Palestine (AMP), an organization at the center of congressional testimony last year from Jonathan Schanzer of the Foundation for Defense of Democracies.

Its network and leadership has "significant overlap" with those with alleged ties to Hamas, said Schanzer, including individuals previously involved in organizations dissolved their leaders were convicted of funneling money to the terror group.

Schanzer said the AMP is "arguably the most important sponsor and organizer for Students for Justice in Palestine," another organization founded by Bazian.

The national campus organization is the key mover of anti-Israel activities at universities, including the introduction and passage of divestment resolutions through student governments.

The presence of a chapter of SJP on a campus has been linked by multiple studies to increased levels of anti-Semitism at that university.