The newly unionized staff at a Virginia Starbucks shut down the coffee giant's annual Christmas promotional event in protest of the company's refusal to meet their demands in the nine days since they formed a bargaining unit.

Baristas at the Starbucks in Arlington's Courthouse Plaza timed their Thursday strike to coincide with "Red Cup Day," where each customer gets a free, reusable red cup with the purchase of any holiday beverage, according to ARLnow. The baristas, who only voted to unionize on Nov. 8, are unhappy at the speed with which the company is responding to their demands.

Union member Samuel Dukore told ARLnow that "Starbucks has been dragging its feet coming to the negotiation table." But Dukore, who has been a union member for about 2 percent of the year, also claims the company "is not negotiating in good faith," a seeming contradiction with his initial complaint.

Over 100 Starbucks branches nationwide are participating in the "Red Cup Rebellion," an effort by Starbucks Workers United to exact concessions from the corporation on one of its busiest days. Striking members are carrying signs with a modified Starbucks logo showing the Grinch's hand holding a Christmas ornament and the phrase "NO CONTRACT, NO COFFEE." The striking baristas are proudly embracing the Grinch label as they attempt to rob festive Americans of caffeinated delights and Christmas cheer.

That's not all the strikers seem to have stolen. A Washington Free Beacon textual analysis confirmed that the protesters' signs use the same typeface as Starbucks competitor Dunkin' Donuts, where employees are not attempting to steal Christmas. 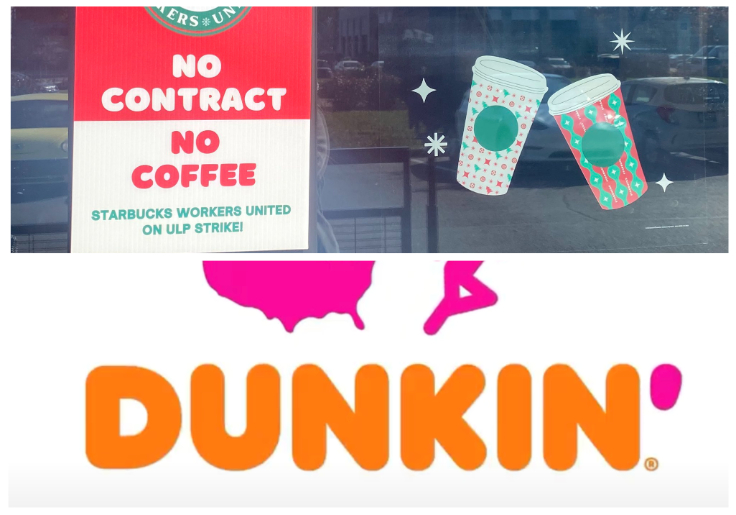 Predictably, the chai-latte-sipping Scrooges have found support among progressive lawmakers. Senator-elect John Fetterman (D., Pa.) voiced his support for the #RedCupRebellion on Twitter, as did avowed democratic socialist Sen. Bernie Sanders (I., Vt.).

Sanders isn't the only socialist boosting the protests. The protesters in Arlington were joined by members of the Northern Virginia branch of the Democratic Socialists of America, but even with assistance from the Internationale, the striking baristas' effort to block customers from obtaining coffee and commemorative red cups was a bust. According to ARLnow, the Courthouse Starbucks is "well-staffed with un-unionized employees and managers, and a greeter at the door welcoming customers."

One employee of the Free Beacon, which is located just blocks from the protest, was able to obtain a Chestnut Praline Latte, one of the chain's signature holiday beverages. The employee, who requested anonymity due to the stigma that comes along with enjoying certain caffeinated creations, said the experience was "delightful."