Something a bit more offbeat in an otherwise stultifying summer

Of the 20 highest-grossing films released through the first half of 2017, just one—February's Get Out—is a wholly original project. The rest are sequels (Guardians of the Galaxy Vol. 2, Cars 3) or exercises in franchise-extending universe building (Wonder Woman, Kong: Skull Island) or remakes (Beauty and the Beast) or reboots (Power Rangers) or adaptations of popular books (The Boss Baby, Captain Underpants) or some unholy amalgamation of several of the preceding categories (The Mummy). It's passé at this point to complain about the overwhelming importance of intellectual property and pre-awareness and other buzzy words that mean little more than "stuff people already know about and therefore studios will have to advertise slightly less," but you can hardly blame audiences for being tired of getting force-fed variations of the same slop weekend after weekend, month after month.

Still, there are a couple of options out there for folks interested in something with a spark of originality. First up we have Baby Driver.

Hyper-rhythmic and focused entirely on the beats banging in the titular chauffeur's ears, Baby Driver is a heist film that takes place within the universe of a musical. It's a rarity in this stultifying summer season: an entirely original movie, and one well worth seeing on the biggest screen with the best sound system possible.

Baby Driver is different and familiar all at the same time, pairing the youthful Ansel Elgort as the eponymous hero with more established actors like Kevin Spacey, Jon Hamm, Jamie Foxx, and Jon Bernthal. Baby (Elgort) has a "hum in the drum," as Doc (Spacey) puts it, a tinnitus whine caused by a car accident when he was a child that Baby drowns out via a constant infusion of iPod-delivered tunes. Baby works for Doc because Baby stole from Doc and Doc will hurt Baby (and Baby's loved ones) if Baby does not repay Baby's debt to Doc.

The rest of the assorted thugs have their stories and their reasons but they don't really matter: They're just along for the ride. Until, that is, Baby decides he's done with this scene, ready to blow town with diner waitress Debora (Lily James). Getting out won't be easy, especially with the crazy Bats (Foxx) and vengeful Buddy (Hamm) in the mix.

The biggest set pieces involve cars, of course, a sort of demolition derby dance scored by a director with an ear for pop tunes with some punch. Baby Driver has the best driving scenes since Drive; tight, compact action numbers that put the bloated Fast and Furious ditties to shame. But the rhythm extends beyond the bang-ups, to the daily movements of Elgort's Baby: He practically dances through the streets and around his apartment, tap dancing to the beat pulsing through his buds. Director Edgar Wright uses the score to show off at times, such as a long shot near the beginning that tracks Baby as he picks up coffee following a bank job—the camera tracks Baby's tip-tapping toes while the diegetic lyrics emanating from his headphones mirror words on the street and in store windows.

Occasionally, Wright's devotion to the beat leads him astray. For instance, during a shootout near the end of the film—one of several—the notes of a song match up with the gun blasts from a rifle. I was a bit put off by it at the time in the theater and it wasn't until a few days later, when I was watching a movie in theaters with a paying audience, that I realized why: The sequence felt like something out of a trailer, one in which camera cuts and bomb blasts synched up to an overly dramatic score. Wright's sympathy for his characters, even the villainous ones, inspires some odd moments; I'm not entirely sure I buy Doc's evolution. And the ending drags, with an extended epilogue holding our hand throughout, patting it, telling us it's all going to be okay.

These are modest complaints, however, when compared with the joy of seeing something wholly original in a summer otherwise marked by bloat and bombast. Elgort and James are perfect as Baby and Debora, a pair of young lovers with little to lose other than each other, and Spacey's always fun to watch.

Baby Driver fits nicely within this body of work and stands strongly on its own. It is not only among the best movies released so far this year, it is also one of the boldest and bravest. 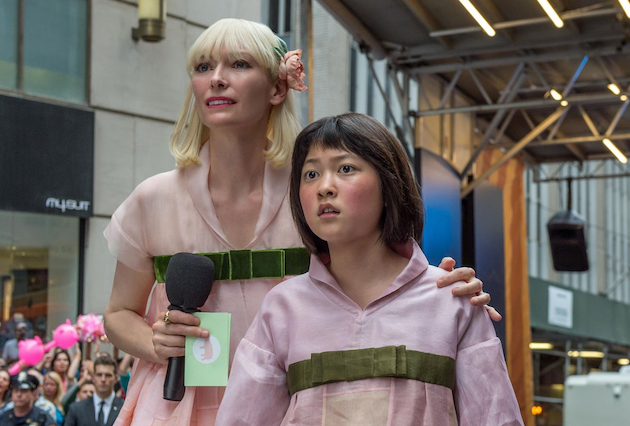 If Baby Driver is fresh-but-familiar—like a Five Guys burger hot off the grill with a few of the more exotic toppings piled on top of its never-frozen patties—then Okja is something fresh-but-freaky—I dunno, imagine a dragon fruit burrito with jelly beans replacing black beans and a tortilla shell made of cotton candy, maybe. It's a mélange of images and performances and ideas that, frankly, shouldn't really work together but all do.

Okja, now streaming on Netflix, opens on Lucy Mirando (Tilda Swinton), a peppy, image-conscious CEO introducing a new super pig at a press conference. While watching an animated infographic the likes of which you've seen distributed by eco-friendly corporations trying to convince you that they're "cool" and "with it" and "hip to what the kids are into," we learn that a bunch of these super pigs—which have a small environmental footprint despite growing to the size of hippos—are being distributed around the world to local famers. In 10 years, a best pig will be crowned.

Skipping ahead 10 years we join Mija (An Seo Hyun), who lives in a small hut in Korea with her grandfather and her super-pig, Okja. In a brief look at their daily life, we come to understand the girl's intense attachment to the big pig and see its attachment to the girl—Okja's soulful, giant eyes and gentle actions show an intelligence and affection that make her later mistreatment all the more horrifying. The Mirando corporation comes to visit Okja in the guise of Johnny Wilcox (Jake Gyllenhaal), a flamboyant Steve Irwin-type who has become the face of the company.

He plans on bringing Okja back to America in order to crown her best pig, an effort a cell of the Animal Liberation Front headed by Jay (Paul Dano) aims to disrupt, given that they object to animal cruelty and genetically modified organisms. Hijinks and high-speed chases give way to horror and Holocaust imagery as we see the conditions in which Okja's factory-farmed brethren live.

The performances are almost perfectly pitched. Swinton pulls double duty as twin sister execs, Lucy and Nancy Mirando, switching seamlessly between the image-conscious Lucy and the bloodless profiteer, Nancy. Hyun brings a charming sass to Mija, while Dano's turn as the ALF leader synthesizes sympathy and menace in a way that makes that band of terrorists feel a bit too compassionate. The one off note is Gyllenhaal's Wilcox, a flailing, mincing caricature who feels out of place even in a world as awkward and awful as the one portrayed in Okja.

Director Bong Joon Ho is one of the few major filmmakers working today producing actively leftwing films who does not allow his ideological hectoring to overwhelm his pictures' entertainment value: The Host (2006) was a lesson about environmentalism posing as a monster movie, while Snowpiercer (2013) dressed up its class warfare with martial arts action. Okja's obsessions range from the silly (GMOs are good and all arguments to the contrary are ignorant gibberish) to the troubling (factory farming, on the other hand, has some drawbacks), but they never get in the way of the story he's trying to tell about a girl and her pig.