As the novel coronavirus spreads through the country, states from New York to California have been forced to implement draconian public health measures, ordering citizens to remain in their homes and shutting down all nonessential businesses.

These policies are a response to the rapid spread of the disease, with the United States now reporting over 150,000 cases, more than any other country on earth (although China and Iran are almost certainly lying about their statistics). But the rules are also a response to a lack of knowledge about who has and has not been infected by the coronavirus, forcing widespread lockdowns in light of reports that the virus may be spread even by people who are asymptomatic.

Widespread testing would address the specter of silent illness, but a dearth of tests has left the supplies largely reserved for the most ill. This has left policymakers and the public laboring under what Atlantic staff writer Derek Thompson labeled "the fog of pandemic." Experts tell the Washington Free Beacon that figures key to modeling the pandemic—how many people contract the disease and are asymptomatic, or how many have already recovered—remain elusive.

This, in turn, makes it hard to know how long an outbreak will last or where it will strike next, leaving public health authorities operating half-blind. Until this situation is rectified, experts argue, America will remain in the dark. Widespread testing, however, could help bring millions out of quarantine.

How many people are infected with SARS-CoV-2, the virus that causes the disease COVID-19? Recent figures indicate that there are about 175,000 confirmed cases in the United States, a precipitous increase from 98 on March 1. Those numbers, however, cannot tell the whole story. 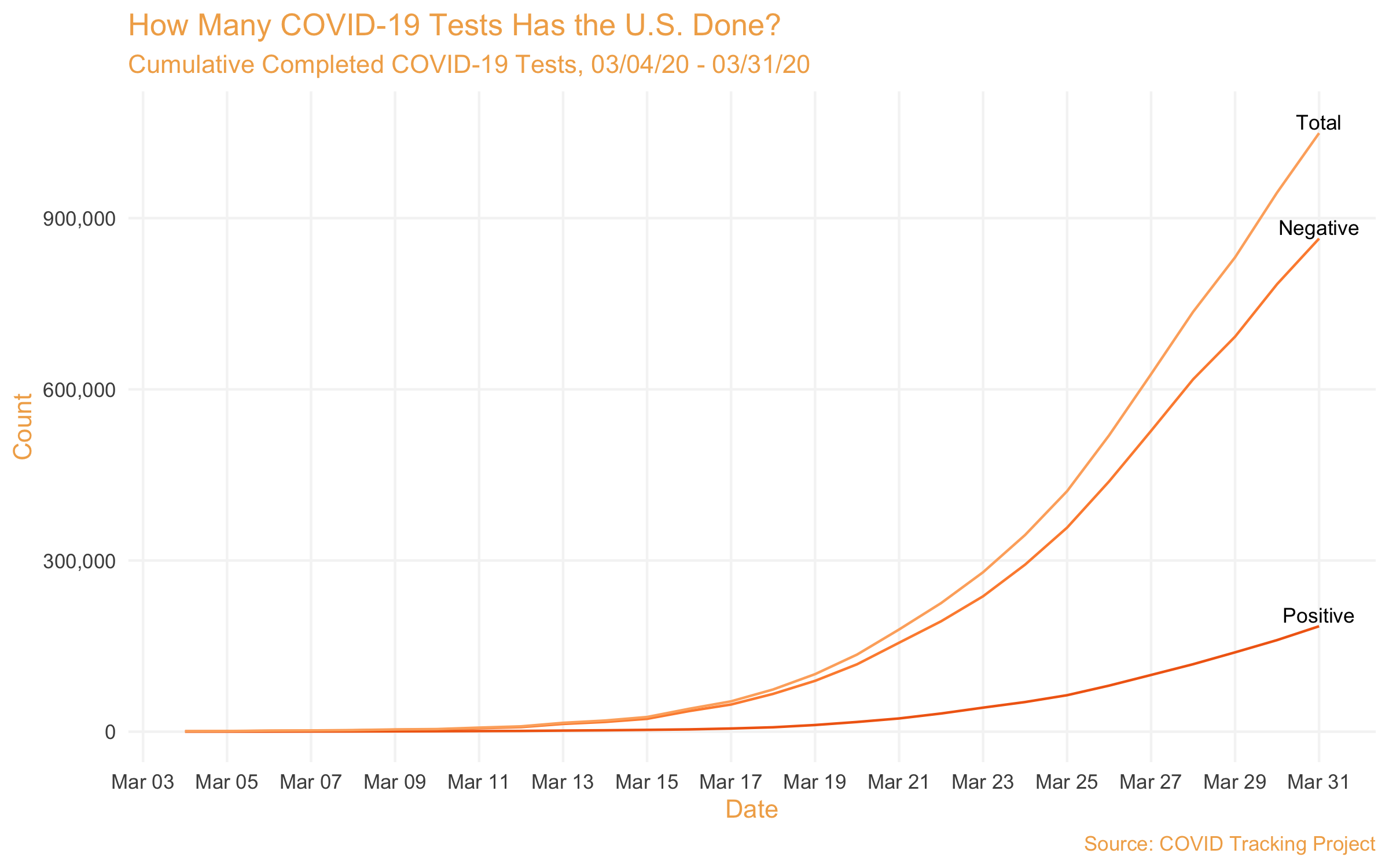 In total, just under a million Americans have received a test, about 3 in 1,000. Who gets a test is overwhelmingly determined by those showing symptoms. Current CDC guidance recommends prioritizing those who are showing symptoms or, if testing resources are available, medical professionals and EMS workers. New Yorkers need a doctor's note to get tested, and public health authorities in both New York City and Los Angeles previously instructed doctors only to give tests when doing so would change the course of treatment.

The "symptoms first" approach saves lives. Because it is not collected randomly, however, it also makes it harder to know how many cases there are nationwide and how quickly the disease is spreading.

"In population disease surveillance, a key question that has to be answered is—how many cases does each identified case represent in the population?" Dr. Jay Bhattacharya, a professor of medicine at Stanford, told the Free Beacon by email. "With non-systematically collected test data, it is almost impossible to answer that question with any degree of precision. In the case of COVID-19, it seems likely that the number of cases represented by each case is very different from state to state and even county to county."

Knowing the true prevalence of something in a population—eye color, height, or COVID-19 infection—would require either surveying the entire population or taking a random sample to estimate the share of the population with the trait. Current testing, constrained by resources, does neither.

That means that only severe cases are getting counted. Many COVID-19 patients, particularly children, have only mild symptoms and are told to convalesce at home, untested and uncounted. So little is known about the scope of asymptomatic infections that estimates range anywhere from 18 to 86 percent.

The United States' slow ramp-up in testing creates related challenges. Because the number of tests has risen exponentially, it is hard to tease out how many cases added each day reflect new infections versus added testing capacity.

"This is all a moving picture. We didn't know how many cases we had with such limited testing," Dr. Laura Kahn, an internist and research scholar at Princeton's Program on Science and Global Security, told the Free Beacon. "And now that that's being ramped up, we're getting more of an idea of how prevalent it is in the population, evidence of its incidence rate and new cases."

Such concerns have major ramifications for policymakers, who are used to relying on data to make projections and identify where resources are most needed.

"We never have anything approaching perfect measurement for anything, and we always have to make decisions with imperfect information," Bhattacharya said. "The problem with the COVID-19 policy response is that we are making difficult-to-reverse policy decisions with momentous consequences in the face of uncertainty, without having made the attempt to resolve that uncertainty."

This uncertainty is part of what has paralyzed America. State and federal policymakers have relied heavily on epidemiological models to predict the course of the disease, a piece of information they need in order to tell businesses when they can expect to reopen. Daniel Crouch, a postdoctoral researcher in genetics and statistics at Oxford, told the Free Beacon that such models involve plugging in estimates of the disease's prevalence and "reproduction rate," the rate at which it reproduces by spreading itself, then accounting for how herd immunity and public policy affect spread.

Such models, however, hinge on variables like the share of patients who are asymptomatic and the share who have already recovered—all of which are unmeasurable with current data. As Harvard economist James Stock noted in a paper released Monday, the nonrandomized approach to testing means that "surprisingly little data exists" to fill in these variables, leaving modelers to take shots in the dark.

Properly calibrated models would be invaluable to state-level policymakers looking to figure out if their states' cases will explode, like New York, or peter out, as those in Washington state appear to have done. Absent a clear picture of how many people are or have been sick, however, everyone has to be treated as possibly infected—resulting in the blunt instrument of statewide lockdowns many Americans are currently experiencing.

Bhattacharya, along with two colleagues, has floated a solution: Take a random sample of the population and test them for the presence of COVID-19 antibodies in their bloodstream, a so-called serosurvey. This would give experts a baseline of how many people have had the disease and let them more precisely identify which places have already faced it and where it is still incubating.

"It is definitely possible to organize a nationwide seroprevalence study which could give us an answer within two weeks given the will to fund it," Bhattacharya said. "Once we have that answer, we won't have to guess whether our view of reality is too optimistic or too pessimistic."

Former FDA commissioner Dr. Scott Gottlieb has called for more expansive "sentinel surveillance," adapting the CDC's influenza-like illness (ILI) surveillance system to track COVID-19 hotspots. The ILI system relies on hundreds of labs across the country to follow the incidence of influenza on a weekly basis. A scaled-up system, Gottlieb has written, would be "the foundation of widespread surveillance that will eventually turn COVID-19 into a more manageable threat, in advance of having a safe and effective vaccine."

"Diagnostic test innovation to enable broad, timely access to appropriate testing," Gottlieb wrote, "will enable a significant sustained reduction in the intensive physical isolation measures being implemented now, with their associated impact on the well-being of Americans and on economic activity."

In other words: The more we test, and the better data we have, the sooner a return to something like normalcy is possible.