The novel coronavirus and concurrent nationwide lockdown could see the closure of as many as two in three of America's small businesses, a new survey finds.

Four in 10 small businesses have already temporarily closed due to coronavirus, the survey finds, with many expecting permanent closures in the coming months if the states' lockdowns drag on. Restaurants and entertainment venues expect to be particularly hard hit, with most deeply pessimistic about their ability to come back from a shutdown of more than a few months.

These results are just the latest grim news for an economy battered by SARS-CoV-2, including unemployment at levels unseen since the Great Depression. The particularly dark outlook for small businesses, however, heralds a bigger shift, as their collapse may allow larger firms to further consolidate economic influence.

The survey, conducted by a group of academic economists, covered over 5,800 small businesses—those with 500 or fewer employees—across the United States. Many of those firms have already closed or are shedding workers, with respondents reporting a 40 percent average reduction in payroll as compared with Jan. 31.

That shedding is likely to continue at least through the duration of the crisis, as small business owners report major concerns with both lessened demand and fears for the health of their employees. Many also do not have adequate cash reserves to weather a crisis: One in four do not have enough cash on hand to cover one month's expenses, while one in two could only cover one to two months.

"These limited levels of cash on hand readily explain why layoffs and shutdowns have been so prevalent," the paper notes. "Absent these actions, it is hard to understand how these firms could have met payroll. Moreover, it is hard to imagine how the firms that are still open are going to survive without laying off their existing workers, at least without an infusion of more credit."

Business owners' optimism about the future depends a great deal on how long they expect to be shut down. Seventy percent said they could remain open if the crisis lasted only a month, but that figure drops to 38 percent if the crisis stretches on for six months. Dr. Anthony Fauci, who has advised President Donald Trump on the nation's coronavirus response, said Sunday he expected some partial reopenings in May. 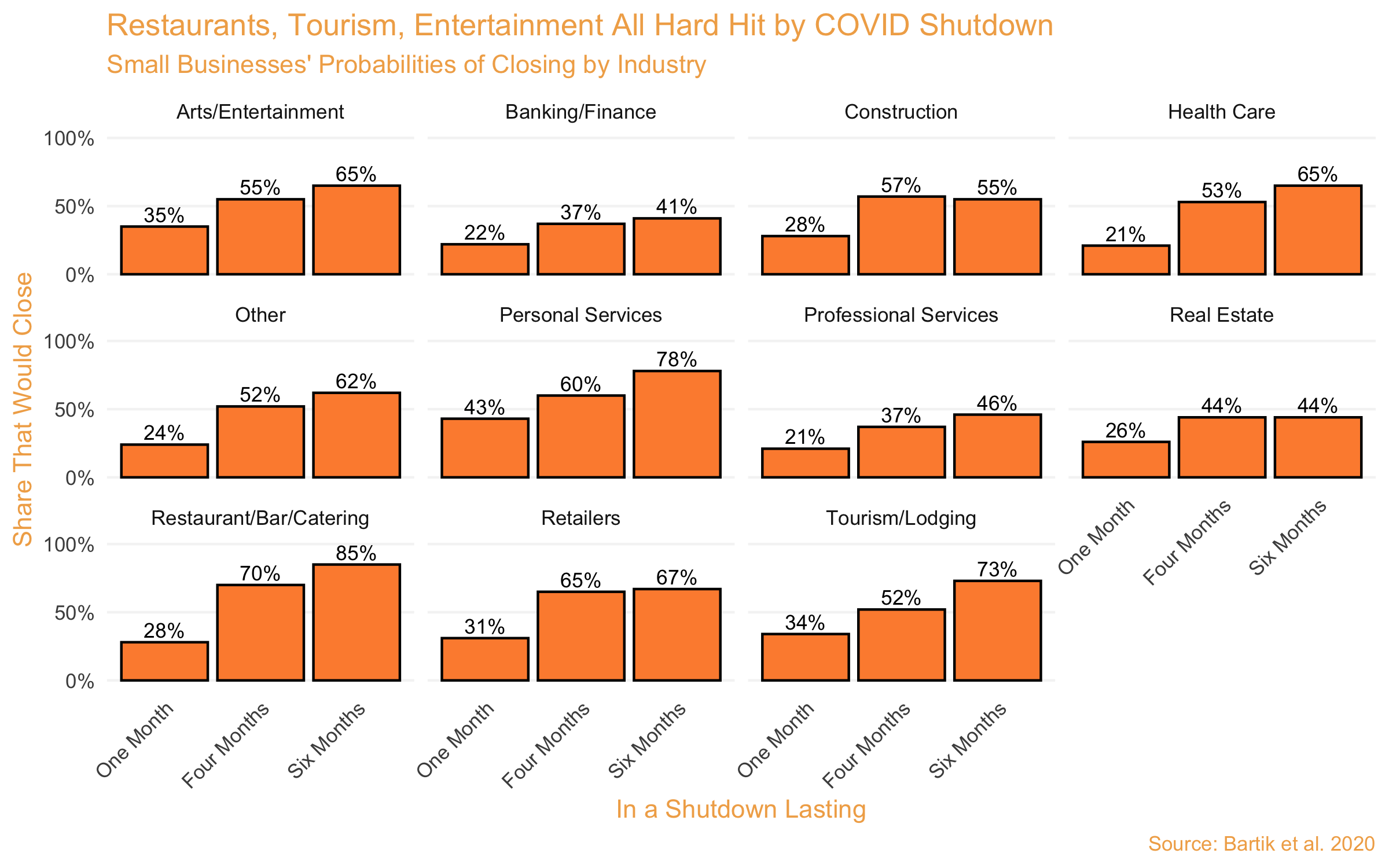 That may be too long for some industries, however. Nearly half of "personal services" businesses—businesses that provide assistance to people like lawn care, accounting, or consulting—would close in a shutdown lasting one month. A longer shutdown, up to four months, would snatch up 65 percent of retailers, 70 percent of restaurants, and 55 percent of entertainment businesses.

Responding to the dire position of small businesses, the most recent coronavirus stimulus bill included $350 billion to fund the Paycheck Protection Program, which gives businesses with fewer than 500 employees forgivable loans to cover payroll, rent, and other urgent expenses. Asked about an analogous program, the survey's respondents projected that it would drop their payroll reductions from 40 percent to 6 percent.

Absent a much-needed and ongoing cash infusion, the survey makes clear many of America's small businesses will vanish. That is likely to have a reverberating impact throughout the economy, as roughly half of Americans work for a small business.

That proportion may already be changing—while small businesses shed workers, large ones have been picking them up. As unemployment reaches record highs, many large businesses—including Amazon, CVS, and Instacart—are hiring tens or hundreds of thousands of new workers to cope with added demand in an economy that has gone online and remote.

That makes the PPP and programs like it all the more urgent for keeping small employers afloat. The program's coffers have been rapidly depleted, however, and run a risk of emptying out entirely. Republicans last week attempted to infuse an additional $250 billion into the program but were blocked by Senate Democrats, who wanted to attach a further $250 billion in coronavirus-related funding.