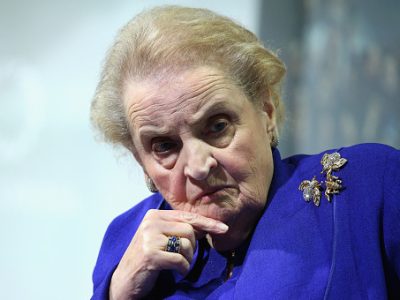 Can we pause from our hypomanic poll checkups? Can we stop tweeting about the early vote? Is it possible in the final days of this close election to step back and reflect, if only for a few moments, on the challenges that will face whoever is elected president on Tuesday? I’m as guilty as the next pundit of obsessing over the fight between Mitt Romney and Barack Obama. My nerves are fried. I’ve been freebasing poll crosstabs like an addict. But the fiscal, economic, and foreign policy crises that will likely unfold in the coming months cannot be ignored.

Do not assume that Republicans or Democrats will watch the election returns and say, "Well, that’s it. The people have spoken. Time to pack it up and roll over." Quite the opposite: Trench warfare will endure no matter the outcome of the presidential contest. Republicans will control the House and Democrats will have a slight numerical edge in the Senate, whether or not Obama wins reelection. Whoever is president will have to walk a fine line if he wants the United States economy to boom, the deficit and debt brought under control, and American interests protected. Criticism will be intense. Opposition will be united. The media will bite.

The most pressing issues are debt and taxes. The government is expected to hit the debt ceiling by year’s end. America will walk off the fiscal cliff on Dec. 31 if Congress and the president do not act. Federal spending will be slashed by $1 trillion, including $500 billion in automatic defense cuts. Income taxes on every income group will increase, as will taxes on estates, capital gains, dividends, and payrolls.

The defense cuts will lead to layoffs and the combined effect of the tax increases will make new jobs for displaced workers unlikely. Harvard economist Alberto Alesina has studied large-scale fiscal adjustments. He found that tax increases reduce consumption, investment, and productivity. The European nations under fiscal duress have imposed "austerity" on their economies by hiking taxes. Low growth, high unemployment, and persistent deficits are the consequence.

Obama’s approval rating fell to its historic low the last time the elected branches of government negotiated to raise the debt ceiling. Approval of Congress fared worse. Why should we expect anything different if Obama is reelected and the status quo persists? An Obama with "more flexibility" as a lame-duck-on-arrival may even decide to call the Republicans’ bluff and allow the tax increases and sequester to occur as scheduled. After all, limiting tax hikes to households making more than $250,000 a year does not raise enough revenue to close the deficit or to pay for the future liabilities Obama has incurred. He needs all the money he can get. Romney on the other hand would be better positioned to negotiate a compromise with Boehner and Reid on the debt ceiling, fiscal cliff, and spending and taxes.

The fiscal and economic problems are related. The way a president handles spending and debt has a real effect on economic productivity and growth, as Alesina’s research shows. The lackluster growth we’ve experienced during Obama’s so-called recovery is not enough to cope with population growth, put the budget on a sustainable course, or increase living standards. A prosperous American economy would see growth rates closer to 3 percent and rising levels of participation in the workforce. There would be less of a need for welfare programs such as food stamps. Tax revenues would increase, thereby lowering the deficit.

Obama’s program is stupefying in its shallowness. He wants to increase taxes on high incomes and spend that money, along with trillions borrowed from China and elsewhere, on Democratic client groups such as public sector and construction unions and politically connected green energy mavens. His theory of economic growth seems to be that innovation and productivity are the inevitable result of government spending on "roads and bridges," schools, and research and development. Marginal tax rates do not matter or, if they do, America can afford to raise them without affecting incentives. Trade doesn’t seem to matter either.

America’s economy suffers from a lack of business investment and of business formation.  What is keeping executives from investing and entrepreneurs from launching startups? Have they read Reinhardt and Rogoff’s book and decided they have to wait a few more years to prosper because it takes longer for economies to heal from recessions that follow financial crises? Or is it more likely that the current environment is uncertain and unfriendly and filled with the worrisome prospects of tax hikes and the costs associated with Obamacare and Dodd-Frank? Maybe businesses are leery because they look at out-of-control government spending and mounting future obligations and expect taxes to go higher still.

Whoever is president in January will have to deal with this quandary. The voters do not seem to trust Obama’s approach: He trails on the economic issues even in polls that put him ahead. A second Obama term would be more of the same, with the likely exception of more taxes on the rich and possibly the middle class as well. There would be more certainty in economic policy, but also more unintended consequences from increased social transfers, health care regulations, high deficits, and mounting debt.

Romney would be better positioned to work with the Republican House and enough Democratic Senators from red states. Together they would craft policies that cap tax expenditures in a revenue-neutral way while keeping rates more or less the same; repeal the onerous mandates, regulations, and subsidies in Obamacare that have the potential to distort the workforce, pervert incentives, and break the bank; pass a budget that reduces the invisible tax of government spending while sensibly and slightly modifying entitlements; and lift regulations on coal plants, approve the Keystone Pipeline, and issue permits for drilling offshore and on federal lands.

Finally, there is foreign policy. The crises here are no surprise. America is trying to extricate itself from Afghanistan as much as possible while denying the Taliban victory. Iran’s nuclear program continues despite the latest sanctions. Syria is engulfed in a civil war that has spread to Lebanon and could spread to Turkey and Iraq as well. Libya is an anarchic mess, and there are no clear answers regarding the death of the U.S. ambassador and three other Americans there on the eleventh anniversary of Sept. 11. Egypt is balancing precariously between its army and the Muslim Brotherhood. The Middle East peace process is over. Al Qaeda is resurgent. Russia is Russia, and China is saber rattling while transitioning from one collective dictatorship to another. Europe has turned inward. The U.S. president states unequivocally that he is interested most in "nation building here at home."

The last four years have been a time of drift. There has been a lot of discussion about how America cannot solve every problem, even as America has failed to solve any problems. The United States left Iraq, but not in the way the Bush or the Obama administration wanted. We have led from behind as we pivot listlessly to Asia. The drones rain fire from above as the jihadist movement holds ground below. This sense of aimlessness and gradual retreat would continue in a second Obama term.

A resurgent American economy would dispel the notion that our country is on the wrong track. A boom would weaken the argument that our country is in decline. An optimistic and proud America would be more engaged and assertive on the global stage. That doesn’t mean war; it means a stronger position in relation to other powers.

Liberals love to point out that Reagan negotiated with the Soviet Union. Indeed he did, but not before he condemned the Soviet system in the most unequivocal terms, spent massively on American defense, weathered the ’81-’82 recession, armed Third World anticommunists, and waited for a different sort of leader to emerge from Moscow. Later he would launch the Strategic Defense Initiative.

Reagan acted from a position of strength. Romney would too.