Princeton University's student government manipulated its voting rules to ensure the success of a Boycott, Divestment, and Sanctions referendum that passed on Wednesday. The referendum, which demanded that Princeton boycott a construction company with ties to Israel, received a minority of votes but passed nonetheless after the school’s chief election administrator misled pro-Israel students about how the vote would be tallied.

The tight vote took place at a university home to the "dirty bicker" of 1958 and which has been notoriously inhospitable to Jewish students. It followed a contentious campus debate that received attention from both the Israeli press and Jewish outlets in the United States, where anti-Semitic hate crimes are on the rise.

The controversy over the vote counting began on March 28, when Tigers for Israel president Jared Stone asked the student government's elections manager, Brian Li, whether abstentions would count in the final vote total. The referendum, held between April 11 and April 13, required a 50-percent-plus-1 majority to pass, according to the student government constitution; if the denominator included abstentions, those votes would effectively count against the referendum, giving pro-Israel students a procedural edge.

Li told Stone abstentions did count, so Tigers for Israel developed a campaign that encouraged students to abstain. Rather than persuade students to vote against the referendum, Stone explained, Tigers for Israel assured them it was OK to remain neutral about a complicated geopolitical issue. 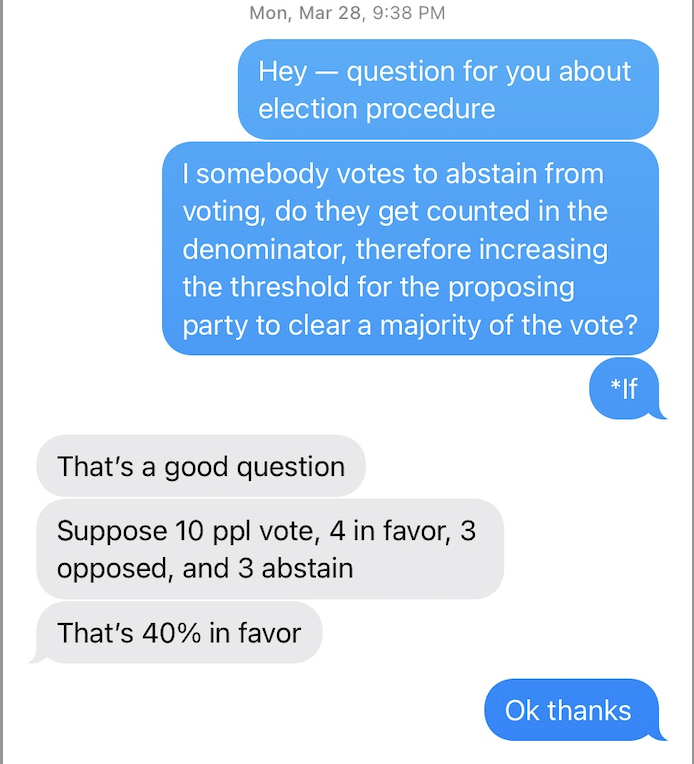 "Opposition campaigners told student after student that it was better to abstain rather than not vote at all," Myles McKnight, a member of Tigers for Israel, said in an email to Princeton's student government.

But hours after voting closed on April 13, Li abruptly changed course, telling pro-Israel student leaders that abstentions wouldn't be counted after all. The reversal changed the outcome of the vote: Including abstentions would have given the referendum only 44 percent support, according to preliminary results published by the Daily Princetonian. Excluding them gave it 52 percent support—just 1 point above the cutoff.

"Forgive me if I said differently," Li told Stone, but "the [elections] handbook indicates that abstentions do *not* count against votes in the affirmative."

As chief elections manager, Li had the final say on voting rules, several students told the Free Beacon. He also would have had access to the results as they came in, raising questions about whether he deliberately swung the election.

"I was assured explicitly in writing, and repeatedly throughout the campaign in verbal form, that abstention votes would count toward the total number of votes cast," Stone said. "To witness this pledge being amended ex post facto, following the conclusion of student voting, is deeply troubling."

Li, who did not respond to a request for comment, assured the Daily Princetonian the election was "procedurally fair and sound."

The final results "will not be released any earlier than Friday afternoon," Li said. "It may take longer if we have complaints [about the] results."

The chicanery marks a setback for Princeton's pro-Israel students, who in 2015 waged a successful campaign against another BDS referendum. That referendum sparked an uptick in anti-Semitic incidents on the Ivy League campus, some students said, as did the Israel-Gaza War last year. In May 2021, Princeton president Christopher Eisgruber condemned the harassment of Jewish students at Princeton, drawing a link between anti-Semitism and the Israeli-Palestinian conflict.

"Sharp, intense, and provocative disagreement about Israel and Palestine is fully consistent with the debate that must occur on college campuses," Eisgruber said. "Harassment, heckling, stereotyping, and intimidation are not."

The April 13 referendum calls on Princeton to stop contracting with the construction company Caterpillar, which the referendum claims is complicit in "the mass demolition of Palestinian homes, the murder of Palestinians and other innocent people, and the promotion of the prison-industrial complex." The company has long been a target of the BDS movement—though opponents of the referendum noted that the Palestinian Authority itself uses Caterpillar equipment.

Princeton has said that it will not divest from Israel regardless of the referendum's outcome. But the symbolic stakes are high. Student governments at Brown and Columbia University have both approved BDS referenda. Should Princeton join the list, it will give BDS one more layer of Ivy League legitimacy—and the Jewish state one less.