Back in 2013, BuzzFeed's Ben Smith made a bold prediction: "The next president will, in all likelihood, be African-American, most likely one of the two African Americans [Cory Booker and Deval Patrick] who would make anybody's list of the top 10 contenders for the Democratic nomination."

The article contained a passing reference to Hillary Clinton, one of the "handful of strong white candidates, none without flaws." Assuming her health problems didn't preclude her from running, Smith wrote of Clinton, she "would face the same questions she did in 2008: How can she be the face of the future, not the past?"

Hillary never had to grapple with that question in the 2016 Democratic primary, given that her only real competition was a 75-year-old (white male) socialist curmudgeon. Neither Booker nor Patrick entered the race, presumably because they didn't want to end up on the Clinton's extensive "enemies list." It was Hillary's turn. In fact, no minority candidates sought the Democratic nomination that year. Her only challengers were some ragtag white dudes.

Smith's prediction was, of course, incredibly off the mark. Alpha white male Donald Trump humiliated Hillary Clinton in one of the most grimly hilarious political outcomes in American history.

The 2020 Democratic primary couldn't be more different. At least 20 candidates will be in the running when all is said and done. Two of the serious contenders—Booker and Sen. Kamala Harris (D., Calif.)—are black. The rest of the field includes a number of candidates who aren't white men, such as Julian Castro, Tulsi Gabbard, Elizabeth Warren, Amy Klobuchar, Kirsten Gillibrand, and Andrew Yang.

It would certainly be on brand for the Democratic Party, with its modern obsession with identity, privilege, and "wokeness," to nominate a minority and/or female candidate to take on Trump in 2020. After all, it is the Republican Party that is constantly derided as the "party of white men."

CNN elections analyst Harry Enten argued as much back in December 2018. "I'm very suspect of [a white male candidate] this year going into a Democratic primary with women doing well and the African- American base of the Democratic Party," Enten said. "I'm not sure it's the time to nominate a white man."

Here's what Enten's candidate rankings looked like at the time, before any candidate had formally announced: 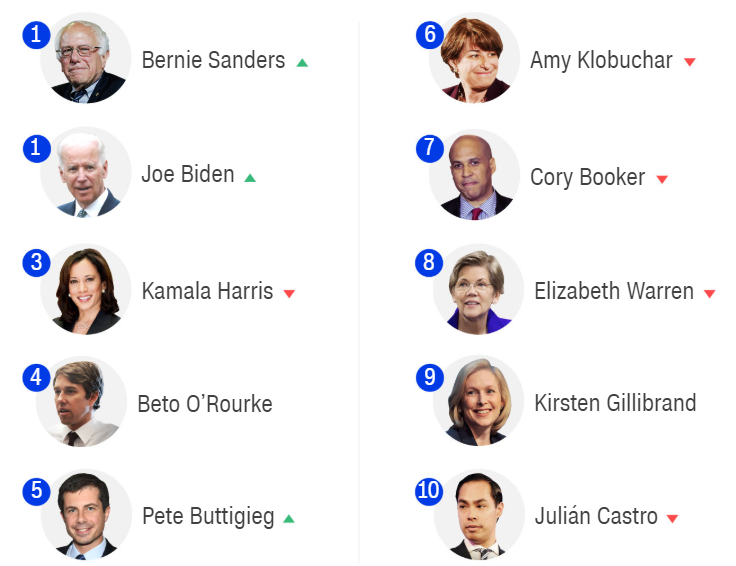 Whereas the December rankings featured just two white male candidates in the top 5, there are now four of them leading the pack, including the co-frontrunners. The momentum is clearly behind these white male candidates, South Bend mayor Pete Buttigieg in particular, while everyone else appears to be struggling to stay relevant.

Obviously, it's still ridiculously early in the cycle. Castro won't be around much longer, but Warren, Harris, and potentially Booker figure to be strong candidates as the primary gets underway. Nevertheless, these early developments in the race are somewhat surprising, to say the least.

The Democratic electorate's unexpected enthusiasm for white male candidates has not gone unnoticed by white male Democrats. For example, some randomcongressman named Eric Swalwell just announced he's running for president, because why the hell not? At least he won his most recent election, unlike Beto.

I am running for President of the United States of America.

I see you. I hear you. I'm for you. I AM you. pic.twitter.com/qRcrBvtdAD

Even Terry McAuliffe, the former governor of Virginia and Democratic Party fixer who once left his pregnant wife in a hospital delivery room to attend a Washington Post reporter's birthday party, is teasing a presidential run in the whitiest, male-iest way possible: tweeting out epic memes.

All of this just to find out who will lose to Donald Trump in 2020. Sad!