Why Kay Hagan’s Defeat Is Good for America

As the midterm elections approached, most Democrats had resigned themselves to losing the Senate, but few, if any, were expecting to lose in North Carolina.

To be fair, there weren’t too many Republicans predicting a Thom Tillis victory, either. But that’s exactly what happened Tuesday night, when voters denied Kay Hagan’s bid for reelection. Hagan's loss is a huge win for America, and here's why:

Hagan was a terrible Senator

Ever since riding into office on Obama’s coattails in 2008, Kay Hagan has accomplished next to nothing. She spent the last several years preparing for her reelection by skipping important committee hearings to raise money in Manhattan. Her policy positions were incoherent, and she often avoided weighing in on controversial issues, in some cases by literally running away from reporters. Speaking of the press:

Local media was in the tank

Hagan’s loss was especially sweet because the mainstream press in North Carolina seemed determined to ignore stories that could damage her hopes of reelection. For weeks, local outlets showed very little interest in the question of whether Hagan had skipped a classified intelligence briefing on the rise of ISIS in Iraq in order to attend a fundraiser in New York. The News & Observer in Raleigh knew the answer, but didn’t deem it newsworthy at the time.

Meanwhile, the Charlotte Observer was attempting to debunk troubling stories about how Hagan’s family had personally profited from the 2009 stimulus package by quoting the "nonpartisan" watchdog Citizens for Responsibility and Ethics in Washington (CREW), a group run by liberal hack David Brock. Days before the election, the Observer mysteriously pulled a report about state officials launching a legal inquiry into the Hagan family stimulus grants.

Whither the "war on women"

Hagan closed out her campaign by turning the "war on women" rhetoric up to eleven, which makes sense give that EMILY’s LIST by far her largest donor. For example, this ad from the Democratic Senatorial Campaign Committee (DSCC) played on a loop in the final days, following a campaign rally with Hillary Clinton:

The "war on women" was the overriding theme of Hagan’s rally with Clinton on October 25. "Women’s rights are the canary in the mine," Hillary said to a chorus of cheers. "If you don’t protect women’s rights here at home and around the world, everybody’s rights are lost."

By their own standards, liberal interest groups managed to achieve the impossible in North Carolina by outspending the dreaded Kochtopus. The North Carolina Senate race—one of the most expensive in the country—saw more than $35 million in attacks ads against Republican Thom Tillis, compared to $20 million in ads attacking Hagan. The single biggest spender in the race ($13.1 million) was Senate Majority PAC, a group run by former aides to soon-to-be former Senate Majority Leader Harry Reid.

Hagan’s campaign spent more than twice as much on ads than the Tillis campaign ($11 million vs. $5.2 million), a disparity that many strategists argued gave Hagan an early advantage in the race. The DSCC outspent the NRSC $10.3 million to $8.9 million. Ironically enough, the party that constantly complains about the influence of money in politics provided a case study in how the candidate with the most money doesn’t always win. And that's good for America.

Now, here's a photo of a Kay Hagan supporter reacting to the results on Tuesday: 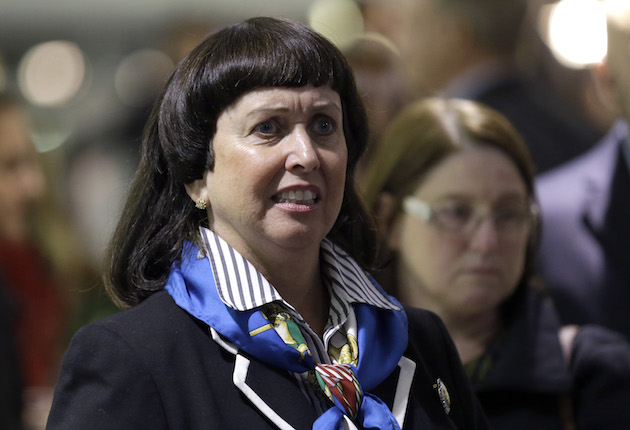