So a few days after flooring us with the scoop that a Catholic politician is sending his son to a Catholic school, Breitbart, a news website founded by a man raised Jewish, is denouncing William Kristol, the editor of The Weekly Standard, as a "renegade Jew."

I'm not really sure what a "renegade Jew" is. The New Oxford American Dictionary—i.e., the handy one on the bottom of your Mac screen—defines a renegade as "a person who deserts and betrays an organization, country, or set of principles."

What does Horowitz think Kristol has betrayed? And what does his being Jewish have to do with it? I think he tries to explain it in his last paragraph:

I am a Jew who has never been to Israel and has never been a Zionist in the sense of believing that Jews can rid themselves of Jew hatred by having their own nation state. But half of world Jewry now lives in Israel, and the enemies whom Obama and Hillary have empowered — Iran, the Muslim Brotherhood, Hezbollah, ISIS, and Hamas — have openly sworn to exterminate the Jews. I am also an American (and an American first), whose country is threatened with destruction by the same enemies. To weaken the only party that stands between the Jews and their annihilation, and between America and the forces intent on destroying her, is a political miscalculation so great and a betrayal so profound as to not be easily forgiven.

So, Kristol betrayed … his fellow Jews? Or America? Both?

I'm still a little hazy. Let's have a look at the comments. One contributor, writing under the nom de guerre "A Wyatt Man" (is he a fan of the author of "Whoso list to hunt"? If so, I guess I'm a "Wyatt man" myself) takes a deeper look at the foreign policy implications of Horowitz's thesis:

Also, Arabs are part of our coalition. This is a diverse coalition to punish the Jew World Order.

Obviously we will deport all non-whites from Europe. That does not mean we cannot be partners of Fascist Arabs to punish Israel. 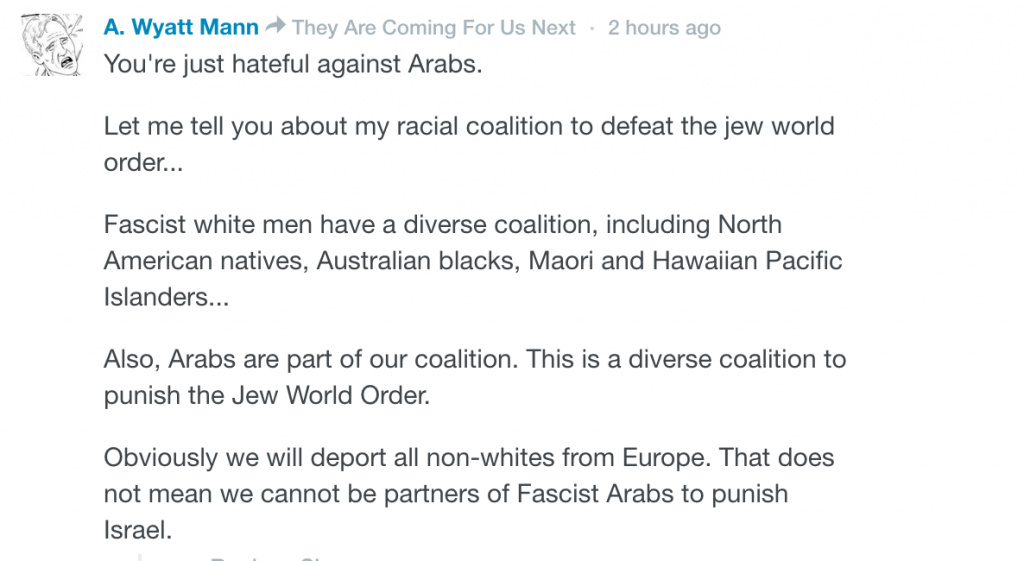 Another fellow, a Mr. WHITE RACE WILL DOMINATE, says:

The jew who wrote this is lying. Bill Kristol is a piece of crap. That much is true.

However, Hezbollah is not trying to exterminate jews.

They want the jews to take a hike. Jews cannot quit lying.

Anyway, time to hear from the boys: