Robert Griffin III has been the savior of the Washington Redskins since his seventh career pass. I'm shocked it took this long for D.C.’s First Rapper to pen a fanfare for Griffin, marking a new low for Redskins fans.

Wale was hired to score a title track for a Gatorade infomercial staring Griffin titled "No Pain, No Gain."

Here's a trailer for the "documentary":

The track, rapped from Griffin's perspective, details his comeback from this. 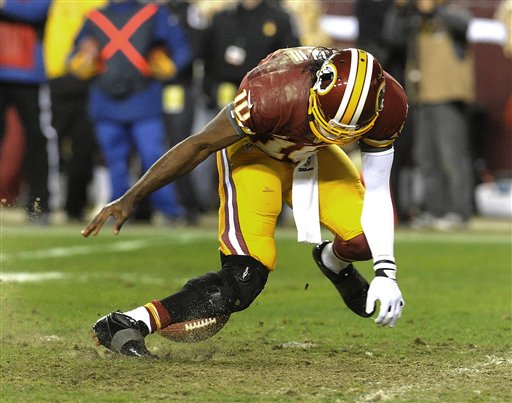 Griffin goes into this season with the weight of the Washington metro area weighing heavily on his surgically repaired knee.

Uh uh, yea I'm a Gladiator I'm a fighting champion a warrior
I'm a family man I gotta pay my dues but can't afford to run

Griffin can't afford to run because this is what happens.

And he can't stand too tall when he face-plants into the turf.

A promising career flaming out.

Good luck coming back from that, RGThreesus.