Is America Surrendering to the Taliban in Afghanistan?

Walid Phares: Current 'road to peace a road for the return of the Taliban to Kabul'

If the Taliban is interested in peace, then the group has a strange way of showing it. As the Taliban prepared for the latest round of negotiations with the United State in Doha, Qatar, over the weekend, purportedly to end the war in Afghanistan on peaceful terms, Afghan security forces mobilized to defend the province of Panjshir from the Islamist insurgency. The Taliban, which recently detailed Panjshir's strategic importance, had just captured a district in the neighboring province and was, according to Afghan officials, threatening to cross the border.

During the previous round of talks, one month earlier, the Taliban targeted an Afghan government facility in Kabul, the capital, with a car bomb. During the attack, the Islamist fundamentalists damaged a nearby school full of students, killing 40 people, most of them civilians, and wounding more than 100 others, including 51 children.

Such attacks, which American negotiators no longer acknowledge, may seem counterproductive since a ceasefire is one of the stated goals of negotiations. To the Taliban, however, these are not acts of violence at all—in fact, they are justified. "This is not violence; this is fighting for the freedom of our country," said Abbas Stanikzai, head of the Taliban's delegation in Doha. "We will fight until the time the country is freed from the foreign occupation." It seems the United States and the Taliban have radically different definitions of a ceasefire. As Walid Phares, a scholar, author, and expert on foreign policy and national security, told me in a recent interview, the Taliban's jihadists would strike a ceasefire to get American forces to leave Afghanistan, but not to agree on a non-violent future. "They want power in Kabul, period."

And yet, the United States is undeterred from seeking a deal under which American soldiers would leave Afghanistan in exchange for concessions from the Taliban, a group that, according to its late founder, Mullah Mohammad Omar, seeks to establish "the law of Allah on His servants." Those concessions would include agreeing to a ceasefire; renouncing al Qaeda, a long-time ally of the Taliban's; and negotiating a larger peace deal directly with the Afghan government, with which the Taliban rejects any dialogue, regarding Kabul as a "puppet" of the United States.

Secretary of State Mike Pompeo said last week that President Trump wants American combat forces in Afghanistan reduced by the 2020 presidential election, and an increasing number of reports indicate that the commander in chief is serious about withdrawing all of the roughly 14,000 troops there. Trump seems to sense the American people are fatigued with the country's longest ever war, now in its 18th year. Indeed, recent polling shows that a plurality of Americans say the United States has failed in Afghanistan, and that a majority of them either say Washington should never have used military force in the first place or are unsure.

One reason why the war carries such a negative connotation is because presidents and other policymakers have not explained to the American people why Afghanistan matters. According to Phares, leaders could explain—or perhaps remind—them why the United States is there. "The U.S. was attacked on 9/11 and had to defend itself by removing the Taliban from power in Afghanistan," said Phares, an analyst for Fox News. "That's the genesis of the war in Afghanistan. It's not a colonial war or an oil and energy matter. The core of the issue is to ensure that the Taliban or other jihadists won't come back to power and re-launch attacks against the American presence in the region or against the homeland."

Phares, who advised the presidential campaigns of Donald Trump in 2016 and Mitt Romney in 2012, added that, while the United States has not achieved its goals, that "does not mean we should allow the Taliban to win and take back the country and threaten us again. One failure should not lead us to another failure." 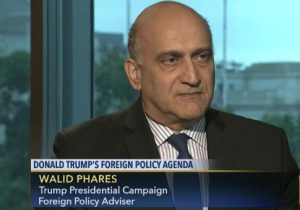 Phares believes the plan that American negotiators are forming in Doha "surrenders" Afghanistan to the Taliban. "I know we must leave Afghanistan inasmuch as we must leave Syria, Iraq, the Gulf, the DMZ in Korea, and also eventually Germany, Estonia, and more," he tweeted last month. "We know that. But not in the hands of jihadists and Stalinists." One problem with the current plan, according to Phares, is that the United States is negotiating directly with the Taliban. "Our approach to the Taliban is wrong," he told me. "We should engage the government in Kabul and the various civil society forces and tribes, not the Taliban." He added that the United States should seek "a solid agreement among Afghans" before backing civil society and isolating the insurgents. "Then we empower the new Afghanistan backed by regional forces. Only at that time can we withdraw based on an agreement with Afghanistan." Rather than try to disarm the Taliban and transform it into an unarmed political party under the current Afghan constitution, Washington is spearheading a process in Doha that would allow the United States to leave "during the gradual integration of the Taliban into the government under a new ‘Islamist Emirate constitution.'"

The Taliban calls itself the Islamic Emirate of Afghanistan, not the Taliban, and consistently says that it seeks to dominate the country alone as an Islamic state. The movement has, for example, scarred and blinded young girls with acid for trying to go to school, viewing such action as acceptable under its fundamentalist view of Islam. And when the insurgency controlled Afghanistan, it allowed al Qaeda to use the country as a safe base of operations—from which the terrorist group launched the Sept. 11 attacks—and refused to hand over Osama bin Laden to the United States, triggering the American invasion on Oct. 7, 2001. According to Phares, the Taliban has not changed its "ideology, strategies, or long-term plans." But Zalmay Khalilzad, the American chief negotiator and special envoy for Afghan reconciliation, seems to disagree. In January, after meeting with the Taliban's delegation in Qatar for several days, Khalilzad said the insurgents "have committed, to our satisfaction, to do what is necessary that would prevent Afghanistan from ever becoming a platform for international terrorist groups or individuals." Since July 2018, however, the United Nations Security Council has published at least four reports, including one last month, detailing the ongoing alliance between the Taliban and al Qaeda. During that time, Gen. Austin Scott Miller, the commander of American and NATO forces in Afghanistan, said that al Qaeda is operating "across" Afghanistan, where the Taliban is either in control of or contesting the vast majority of the country. Undergirding this relationship is the fact that Ayman al Zawahiri, the leader of al Qaeda, has sworn allegiance to the Taliban's emir, Mullah Haibatullah Akhundzada. Phares sees these factors as further evidence that the negotiations in Doha are misguided.

"Al Qaeda and the Taliban are strategic allies. The Taliban can … promise that they will not allow international terrorism to be launched from Afghanistan, and then after the U.S. withdrawal, they will start backing jihadists in the region, then farther away," Phares said. "Soon enough they would host training camps under their control. They may start negotiating with ISIS and other groups. You can't control or rely on those who call terror bloodshed against their own civilians a ‘fight for freedom.'"

"Any serious study of the relationship between the Taliban and al Qaeda since the 1990s would clearly show that it is based on ideology and shared history," Phares added. "If the [American-led] coalition withdraws completely, the Taliban will move to seize power and territory and then reinstall al Qaeda and maybe cut a deal with ISIS to regenerate the caliphate. Do you think they will abide by a piece of paper signed in Qatar?"

The Taliban senses American weakness, according to Phares, and is continuously launching attacks to pressure the negotiators, who, the Islamists believe, will break and accept a deal that paves the way for another Islamic Emirate. "What sources have revealed so far from the Doha talks is that the road to peace is in fact a road for the return of the Taliban to Kabul," he said. Without American or allied troops in Afghanistan, the argument goes, who will stop the Taliban, which is gaining or threatening more territory with each new week?

Still, the Taliban met with Afghan representatives, who attended in their personal capacities, in Doha early last month, and both sides agreed on a non-binding "roadmap for peace," which listed several conditions necessary for an agreement. There were at least four different translations of the statement, however—in Pashtu, Dari, English, and Urdu—and some of the translations had substantive, not just minor, differences concerning a potential agreement. And then, two days later, the Taliban accused the Afghan government of "trying to prolong the U.S. invasion" and mocked Kabul for being excluded from the talks. The group then called democracy a "cruel system" and an obstacle to peace, before adding, "No matter what the puppet regime does, the stance of the mujahideen of the Islamic Emirate of Afghanistan is clear, which is to strive for the cause of Allah and to remove the rule of tyrants and overthrow the disbelief and ignorance and re-establish the rule of shari'a in Afghanistan, which is the will of the Afghan nation."

While Phares believes the United States needs to keep its soldiers in Afghanistan to prevent a new caliphate in Afghanistan—one that killed nearly 3,000 Americans on one September morning—he says ideas are more important weapons in this fight than guns or bombs. "We won every kinetic battle, but we haven't waged the vital war of ideas. I had been calling for this since I published my book, Future Jihad, in 2005," he said. "We did half a war in Afghanistan—the more expensive one in blood and treasure—but not the fundamental part that has to do with minds, not just arms."

Afghanistan "is about using the precious time and space provided to us by our military when the Taliban were removed to help develop realities that can eliminate the Taliban from the equation," Phares continued. "Under the Bush administration the war of ideas was weak; under [Barack] Obama it was non-existent. The Trump administration should wage that war, inexpensive but smart, so that any pullout would be a strategic move aimed at strengthening [Afghanistan's] civil society, not a surrender."

At a time when many voices in Washington, and around the country, are calling for theUnited States to withdraw its soldiers from Afghanistan because they have been there for 18 years, Phares is urging Americans to look beyond the length of time and study the strategic situation on the ground. There are costs to staying in Afghanistan, but there are also costs to leaving. The question should be which costs are greater, not whether one's impatience is worth the price of withdrawing prematurely.